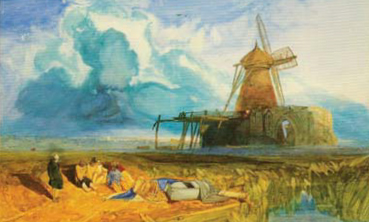 Norfolk was vulnerable to invasion from Scandinavia and Northern Europe, and forts were built to defend against the Angles and Saxons. By the 5th century the Angles had established control of the region and later became the ‘north folk’ and the ‘south folk’, hence Norfolk and Suffolk. These became part of the kingdom of East Anglia, which later merged with Mercia and then Wessex.

In the 9th century the region again came under attack, this time from Danes who killed the king, Edmund the Martyr. In the centuries before the Norman conquest the wetlands of the east of the county began to be converted to farmland, and settlements grew in these areas. Migration into East Anglia must have been high as by the time of the Conquest and Domesday Book survey it was one of the most densely populated parts of the British Isles.

During the Middle Ages the county developed arable agriculture and woollen industries. Norfolk’s prosperity at that time is evident from its large number of mediaeval churches: of an original total of over a thousand, 659 survive, more than in the whole of the rest of Great Britain. The economy was in decline by the time of the Black Death, which dramatically reduced the population in 1349. Over a third of the population of Norwich died during a plague epidemic in 1579. By the 16th century Norwich had grown to become the second largest city in England, but in 1665 the Great Plague again killed around a third of the population.

During the English Civil War Norfolk was largely Parliamentarian. The economy and agriculture of the region declined somewhat. During the Industrial Revolution Norfolk developed little industry, except in Norwich, and was a late addition to the railway network.

Norwich has traditionally been the home of various dissident minorities, notably the French Huguenot and the Belgian Walloon communities in the 16th and 17th centuries, who numbered as many as a third of the population. Many of them worked as weavers. Another important trade in the city was shoemaking.

Britain’s first provincial newspaper, the Norwich Post, was published in 1701. In the mid-18th century some parishes listed three quarters of the men as literate. In the 1780s Norwich shawls became an important industry, although by the 1790s the wool trade began declining from competition and the loss of international markets. In 1797 Thomas Bignold, a 36-year-old wine merchant and banker, founded the first Norwich Union Society to provide insurance. In the 20th century the county found a role in aviation. The first development in airfields came with World War One; there was then a massive expansion during World War Two with the growth of the Royal Air Force and the influx of the American USAAF 8th Air Force which operated from many Norfolk airfields. During and after World War Two, agriculture in the county rapidly intensified.

Exclusive census analysis from the data at TheGenealogist.co.uk reveals that common Norfolk surnames include Clarke, Moore, Cooper, Ward, Howard, Chapman, King, Palmer and Turner. Green was also common in 1841, as was Allen in 1911.

Leading data website TheGenealogist.co.uk has a wealth of records for Norfolk. Here is a quick run-down of what you can find (in addition to national collections):