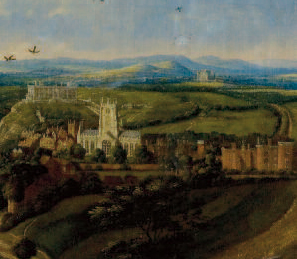 Nottinghamshire lies on the Roman Fosse Way, and there are Roman settlements in the county, for example at Mansfield and the fort at Bilborough. The county was settled by Angles around the 5th century, and became part of the kingdom of Mercia. The county’s name first occurs in 1016, when the shire was harried by Canute, but until 1568 the county was administratively united with Derbyshire, under a single Sheriff. The boundaries have remained practically unaltered since the time of the Domesday survey.

The Peverel Court, founded before 1113 for the recovery of small debts, had jurisdiction over 127 towns in Nottinghamshire, and was held at Nottingham until 1321, in 1330 at Algarthorpe and in 1790 at Lenton, being finally abolished in 1849.

The political history of Nottinghamshire centres round the town and castle of Nottingham, which was seized by Robert of Gloucester on behalf of Maud in 1140; captured by John in 1191; surrendered to Henry III by the rebellious barons in 1264; and formed an important station of Edward III in the Scottish wars. In the Wars of the Roses, the county as a whole favoured the Yorkist cause, Nottingham being one of the most useful bases of Edward IV.

In the Civil War of the 17th century, most of the nobility and gentry favoured the Royalist cause, but Nottingham Castle was garrisoned for Parliament, and in 1651 was ordered to be demolished.

Among the earliest industries of Nottinghamshire were the malting and woollen industries, which flourished in Norman times. The latter declined in the 16th century, and was superseded by hosiery manufacture, which sprang up after the invention of the stocking-loom in 1589.

The earliest evidence of the working of the Nottinghamshire coalfield is from 1259. During the Industrial Revolution the county’s reserves of coal and iron ore were much needed, and led to the construction of some of the first experimental wagon-ways in the world. An example of this is the Wollaton wagon-way of 1603-1616, which transported minerals from bell pit mining areas at Strelley and Bilborough. By 1881, 39 collieries were at work in the county. By then mechanised, deeper collieries had opened, though these declined in the late 20th century.

Exclusive census analysis from the data at TheGenealogist.co.uk reveals that common Nottinghamshire surnames include Jackson, Ward, Mars, Harrison, Cooper and Shaw. Walker, Turner and Green were also common in 1841, as were Clarke and Holmes in 1911.

Leading data website TheGenealogist.co.uk has a wealth of records for Nottinghamshire. Here is a quick run-down of what you can find (in addition to national collections):