One Ring to Bind Them

As a child, growing up in 1970s Jersey, I used to enjoy the Friday afternoon school activity of what I remember being grandly called ‘Island Field Studies’. This was when a bunch of schoolboys were loaded onto an old coach, hired by our school for the purposes, and transported off to one part or another of the island of Jersey to take a look at some ancient dolmen (burial site) or fortification. We then had to try to map what we had seen in our exercise books. I don’t think that my cartographical skills were that good, but it is to this period in my life that I believe saw the beginning of my fascination with maps and charts.

Today, I enjoy poring over maps to discover where more recent ancestors may have lived and to see if the terrain has changed much from their time to ours. One of the map tools that I increasingly use when researching a family history, or looking at a house to discover more about its past is TheGenealogist’s Map Explorer, the powerful map tool that has a collection of overlaid historical and modern maps which are all georeferenced.

Recently, I was looking for a property occupied by a family that I was researching who lived near the tripoint of Oxfordshire, Berkshire and Buckinghamshire on the Thames, the nearest town being Henley-on-Thames. As I explored the surrounding area via the Map Explorer I saw a number of boat houses along the river, as well as named properties, and noted with interest that some had their own gas works marked on the OS maps 1:10,560 series from the 1893-1900s historic layer.

Switching then to the Bing Satellite map, one of the choices that users of this tool can select as their modern map layer, I spotted a ring of stones in the garden of a 1960s private house with a striking modern, circular design. Immediately I was taken back to my school days plotting the Neolithic stones as they had stood in the fields of Jersey. I realised, as I slid the opacity slider back and forth to see it on the earlier map, that this was the dolmen I had heard about that had been removed from the Channel Isles in the 18th century. The whole monument had been transported in 1788 to this location in Berkshire, having once stood approximately 170 miles away as the crow flies across the water of the English Channel on a hill above the town of St Helier, Jersey. The dolmen, then thought to have been a druid’s temple, came to light in 1785 when a parade ground was being levelled for defences being constructed overlooking St Helier, Jersey. A few years later, in the Napoleonic Wars, the more substantial Fort Regent was built on this hill.

By choosing to use the Tithe Maps as the Record Set – Top Layer from the controls on the Map Explorer we see the monument mapped from the Victorian times under the erroneous description of Druids Temple. By using the opacity tool to fade in the middle layer, or historical map, we are able to determine that the main house on the estate was called Park Place.

The ‘Druids Temple’ that the cartographer of the tithe map labelled in 1840 is in actual fact the Dolmen from Le Mont de la Ville, St Helier transplanted to Park Place, Henley-on-Thames. Today, in Jersey, a plaque commemorates the former ancient monument inside the walls of Fort Regent.

Map Explorer allows users to find the tithe plots as they were surveyed between 1837 and the 1850s, with some altered apportionments from later when the land was sold or divided. These maps and apportionment books can be used to reveal who owned or occupied land in the early Victorian period. Using this tool we see that the person who was both the landowner and occupier of the estate at this time was Ebenezer Fuller Maitland. While a wealthy man, the way he came by this estate had been a novel one. 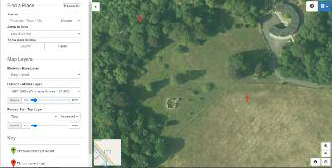 Bing satellite map selected as the Modern– Base Layer 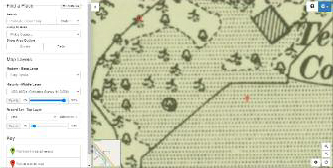 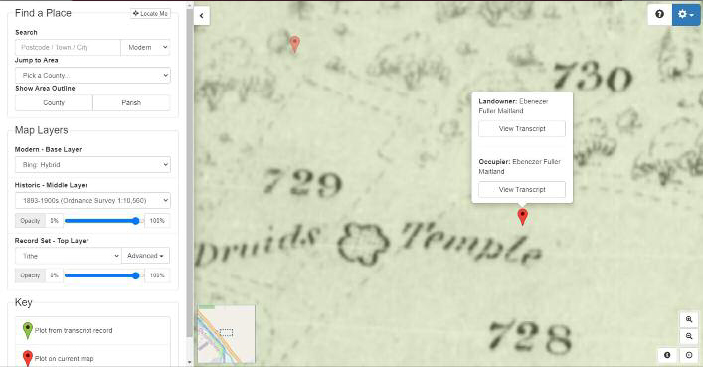 An Index to Changes of Name on TheGenealogist

I’ll swap you mine for yours!

After the death in 1795 of the previous owner, the Hon. Henry Seymour Conway, the Park Place Berkshire estate was purchased by the Earl of Malmesbury in 1797, who expanded the park eastwards. But by 1815, Lord Malmesbury had sold it off in 28 lots by public auction. The main Park Place house and surrounding land was purchased by Henry Piper Spurling; then, just nine years into his ownership, he swapped it with his cousin, Ebenezer Fuller Maitland, for Norbury Park in Surrey.

This was not Fuller Maitland’s only estate – his main one was at Stansted Hall in Essex, but he also owned Shinfield Park and now Park Place on the Thames. He was the son of a director of the Bank of England, named Ebenezer Maitland. In 1807 he also adopted his wife’s aunt’s name of Fuller as part of the terms for inheriting her fortune. Fuller Maitland can be found in the Index to Changes of Name records to be found on TheGenealogist.

In 1804 Fuller Maitland had served as a lieutenant-colonel in the Reading Volunteers. He had been elected as a member of parliament. He represented, in 1807, Lostwithiel, then Wallingford in 1812 and Chippenham in 1826, holding the latter seat until 1830 when he unsuccessfully sought election at Abingdon.

He was appointed Sheriff of Berkshire for 1825–26 and Sheriff of Breconshire for 1831–32. As well as two large London houses, he owned country estates at Shinfield Park and Stansted Mountfichet in Essex, Garth near Builth Wells in Breconshire, High Barcaple in Kirkcudbrightshire and, of course, Park Place in Berkshire.

Ebenezer would appear to have been a Nonconformist as his daughter Francis’s baptism appears in TheGenealogist’s RG5 BMD birth register records for 20 June 1809. This record was in the Protestant Dissenters’ Registry at Rev. Daniel Williams Library, Redcross Street, Cripplegate, London that covers from 6 April 1743 to 30 December 1837.

After Fuller Maitland’s death in Brighton in 1858 his widow lived at Park Place; then it was Charles Easton from 1867; and in 1869 John Noble of Noble’s Paints and Varnishes, who rebuilt much of the building to what can be seen today, after a fire.

In the map tool we can see that the ring of stones appears to be in the garden of a house called Temple Combe that is drawn as a rectangle in the OS maps from 1893-1900s. In modern times this has been replaced by a curved 1960s house. The tithe map, however, from March 1840 shows no house at all. The plot number, 730, indicates in the linked apportionment book that it was ‘Plantation and Copse Wood in Park’ so it would appear that the so-called Druids Temple was still part of the Park Place estate in Ebenezer Fuller Maitland’s time and was not one of the plots that previous owner Lord Malmesbury had sold off before 1815. 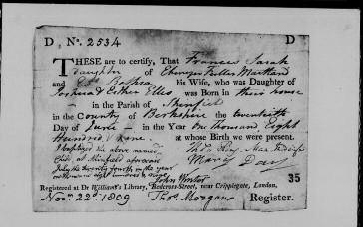 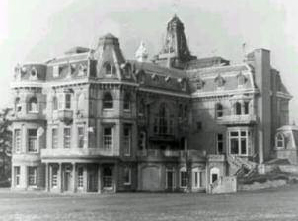 Who brought the stones to Henley?

Tracing the history of the estate back to who owned it at the time that the Jersey dolmen was moved to its new home in England in 1788, we find that in 1752 Park Place and its estate was bought by The Hon. Henry Seymour Conway, the brother of the Earl of Hertford. Seymour Conway, who in later life became the Governor of Jersey, was a politician and an army officer who rose to the rank of field marshal. When he was not away on service, or in London, he lived in the house with his wife, the widowed Countess of Aylesbury, and their only daughter, Anne Seymour Damer – the future sculptress.

We are able to find Field Marshal Seymour Conway’s last will and testament, spread over several page images, in the Prerogative Court of Canterbury wills on TheGenealogist. This document identifies him as ‘...of Park Place in the County of Berks’.

During Seymour Conway’s ownership of the estate many important people would visit, including his cousin Horace Walpole, the 4th Earl of Oxford, who is remembered as a writer, art historian, man of letters, antiquarian and Whig politician. Other guests at Park Place had included the philosopher Jean-Jacques Rousseau and the social reformer and patron of the arts Elizabeth Montagu, who helped to lead the Blue Stockings Society. Lady Hamilton, famous as Nelson’s mistress, had also been a guest. From the world of the stage Seymour Conway entertained actors David Garrick, Elizabeth Farren and Kitty Clive. We can wonder if the house guests were taken to see the stones and marvelled at his unusual gift from the Channel Islands.

Field Marshal Seymour Conway appears in a number of records to be found on TheGenealogist that allow us to build a picture of his achievements. In the 1768 Berkshire Poll for the Knights of the Shire, in the Poll & Electoral records, there is a list of members of parliament in which the Right Hon. Henry Seymour Conway is listed as the member for Thetford in Norfolk. He has an entry in the Dictionary of National Biography, under Occupational records, and appears in several editions of the Army Lists in the Military records collection recording his appointment to various posts, not the least of which was in the 1778 edition where he is Governor of Jersey. In A Companion to the Royal Calendar 1783, in the Peerage, Gentry & Royalty records on TheGenealogist, he is listed as a Secretary of State in the Foreign Department.

Early owners of the estate Park Place, however, had an interesting history even before it was bought by Henry Seymour Conway, as can be found on the Historic England website, https://historicengland.org.uk. The estate had once been in the hands of royalty when it was home to Frederick, Prince of Wales in the late 1730s and 40s. Going back even further, at one time it had just been farmland. It was sold in 1719 by a Mrs Elizabeth Baker to Lord Archibald Hamilton, who put up a Palladian mansion which he named Park Place – this saw the estate come into being. In 1738. Lord Hamilton then sold Park Place Estate to the Prince of Wales and in 1751, after the Prince’s death, it was at this time that General the Hon. Henry Seymour Conway bought it and completed major rebuilding and extensions to the house. It was Seymour Conway who set about making many improvements to the land including creating a ‘Happy Valley’ with lawns that ran down to the River Thames. The position of this can be seen marked on some of the historical OS maps on the Map Explorer, while appearing only as an unnamed feature on some of the other plans. While it is not possible for the public to visit the ancient monument, by using the Map Explorer and its Victorian tithe maps overlaid onto the modern satellite map, we have been able to accurately locate it today. TheGenealogist’s Map Explorer is my go-to resource when I am looking at an area where an ancestor may have lived and want to see how it may have changed over the years. 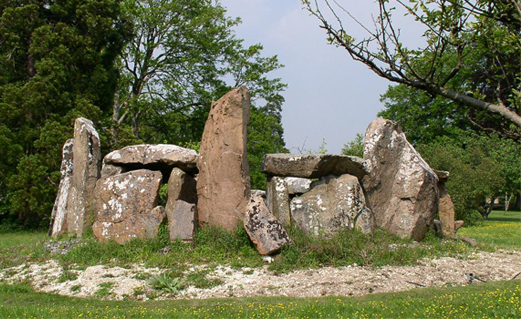 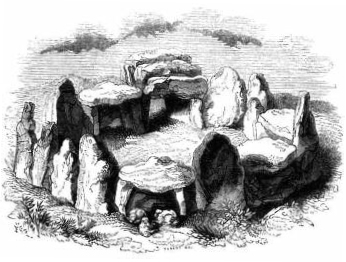 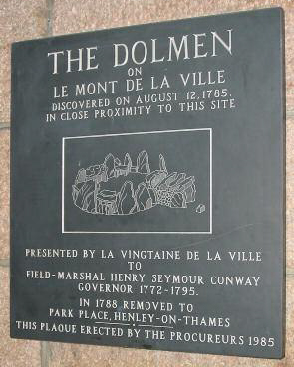 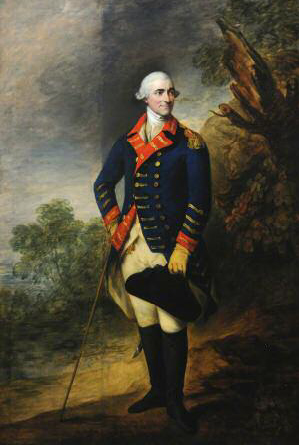 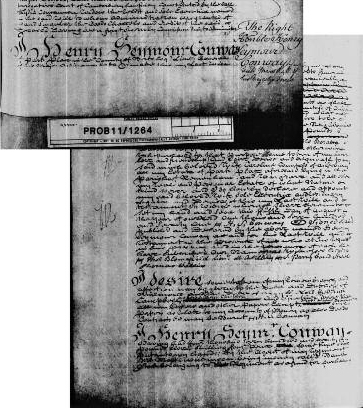 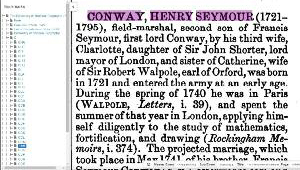 Dictionary of National Biography under Occupational records on TheGenealogist