PIECING TOGETHER A MURDER MYSTERY

How you can use an array of detailed sources on TheGenealogist to uncover colourful stories from your family’s past.

Ancestors who fell foul of the law are always fascinating subjects for family history research, and it can be exciting to unearth a felon within the records. The Convict Transportation Registers on TheGenealogist are a great resource for finding any forebears that escaped the hangman's noose, but were banished to the other side of the world for committing a crime.

People from all over Britain served their sentence in penal colonies working for free settlers, or in public works in the colony. Convicts were first sent to settlements in America, but with independence for the United States the British authorities switched to sending its convicted prisoners to Australia. This carried on until the abolition of penal transportation in 1853.

A number of courts were able to sentence convicts to transportation, including the Royal Court in the Channel Island of Jersey where we find Miss Maria Le Noble from St Helier, Jersey. She was convicted of killing a policeman who had gone to her house to draw up a report against her for a riot in which she had taken part. Searching the Newspaper & Magazine records on TheGenealogist we find the murder reported in the Illustrated London News for 7 March 1846: "She stabbed [him] in the stomach and he died the next day." 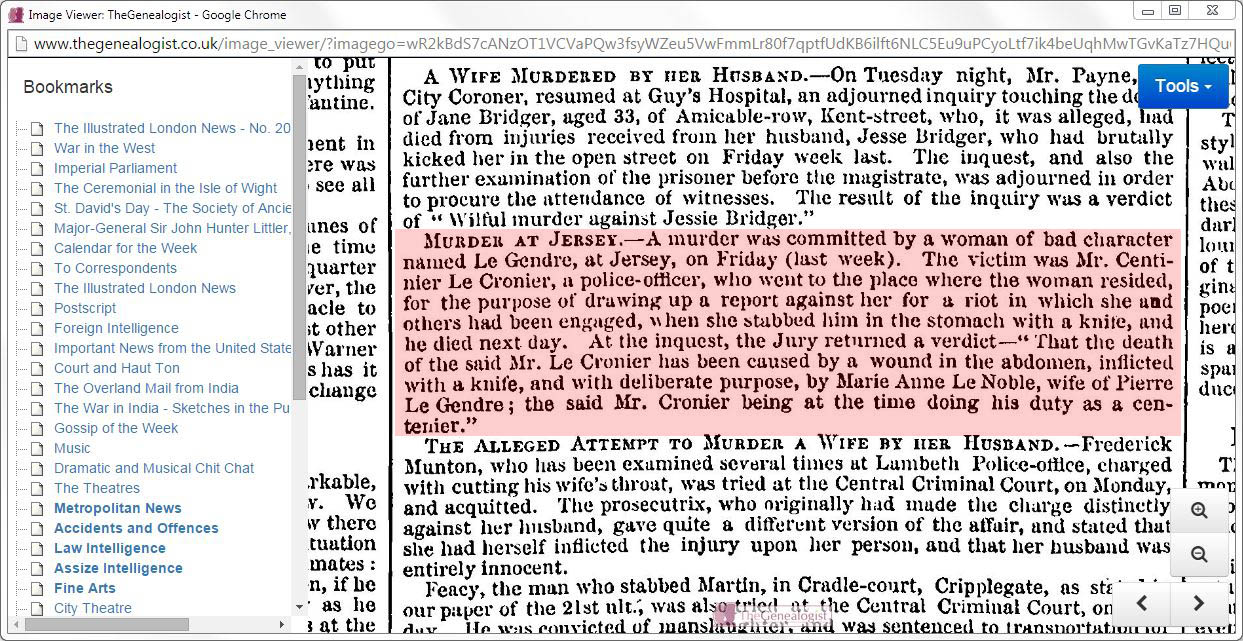 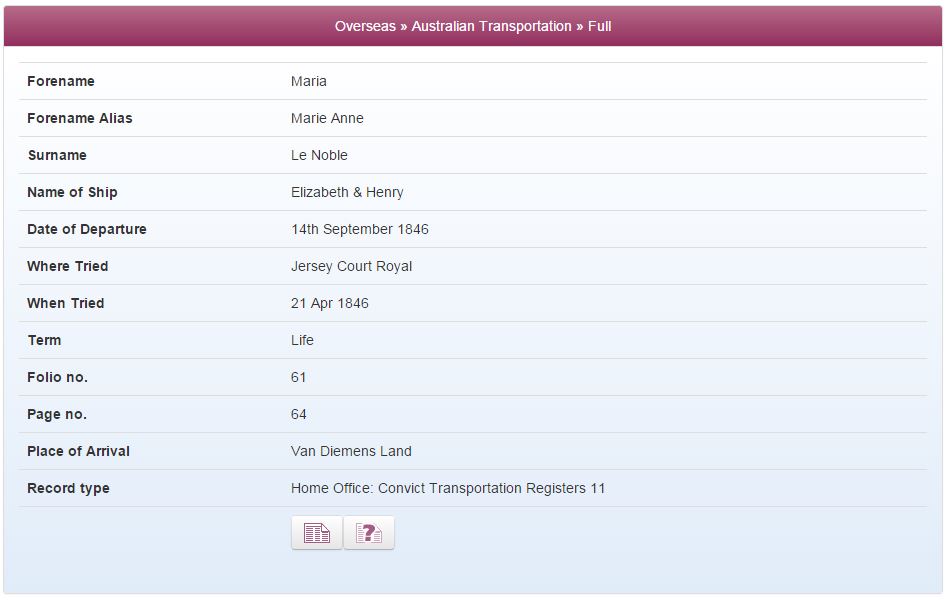 Le Noble was a notorious 'madam' running a house of ill repute from what, in contemporary reports, was delightfully named as Mulberry Cottage in Patriotic Place. Le Noble was living as the 'wife' of Pierre Le Gendre of the sae address and calling herself Mary. There were also four other young women under their roof.

Despite the clear-cut facts pointing to a capital crime, Victorian juries were reluctant to see women hanged and so she was prosecuted for manslaughter to ensure a conviction. This emphasises the need to take into account the social context of the times in family history research.

We can find Le Noble and Le Gendre on TheGenealogist in the 1841 Census where Le Noble is listed as housekeeper, Le Gendre as a farmer, and four more women, all supposedly 20-years-old, with no occupation. One wonders what had gone through the enumerator's mind before he decided to leave these blanks in his return.

Until the 19th century, the unpaid Honorary Police provided the only civilian law enforcement for the island and the victim of Maria Le Noble's crime was one of their ranks. Mr George Le Cronier was a merchant in the town and, as a Centenier, was also a senior member of the Honorary Police for the Parish of St Helier, a position he was elected to by parishioners. 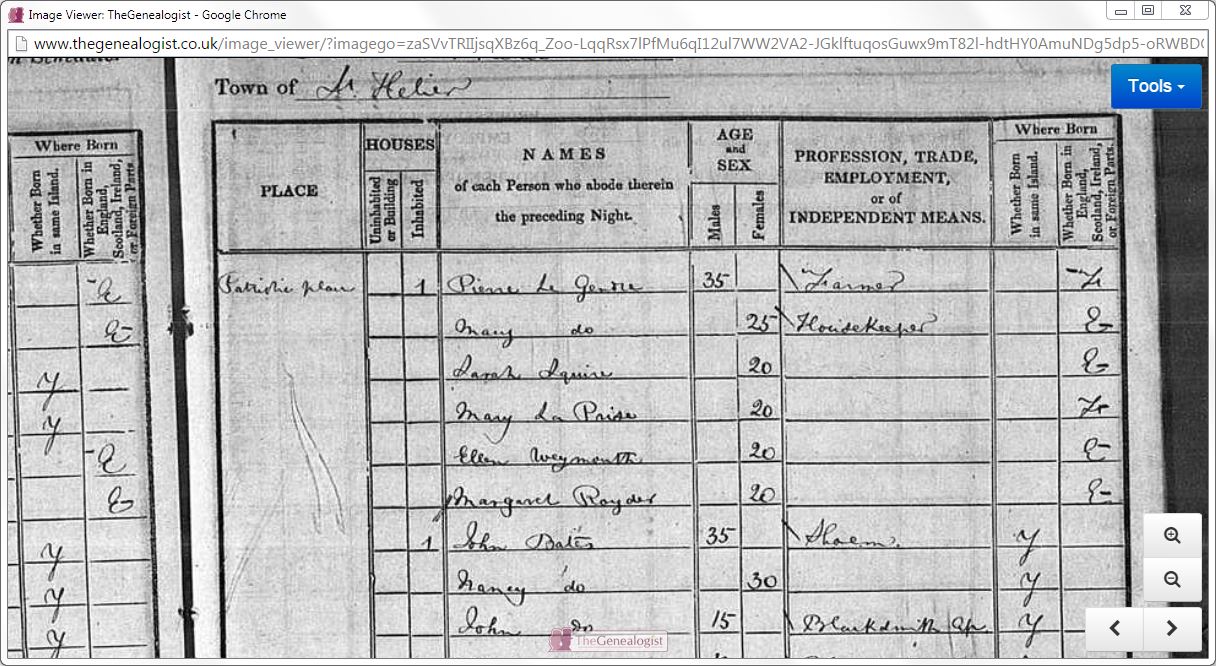 Telling
If we read between the lines of the information provided on this census return, we can assume that this was a house of ill repute 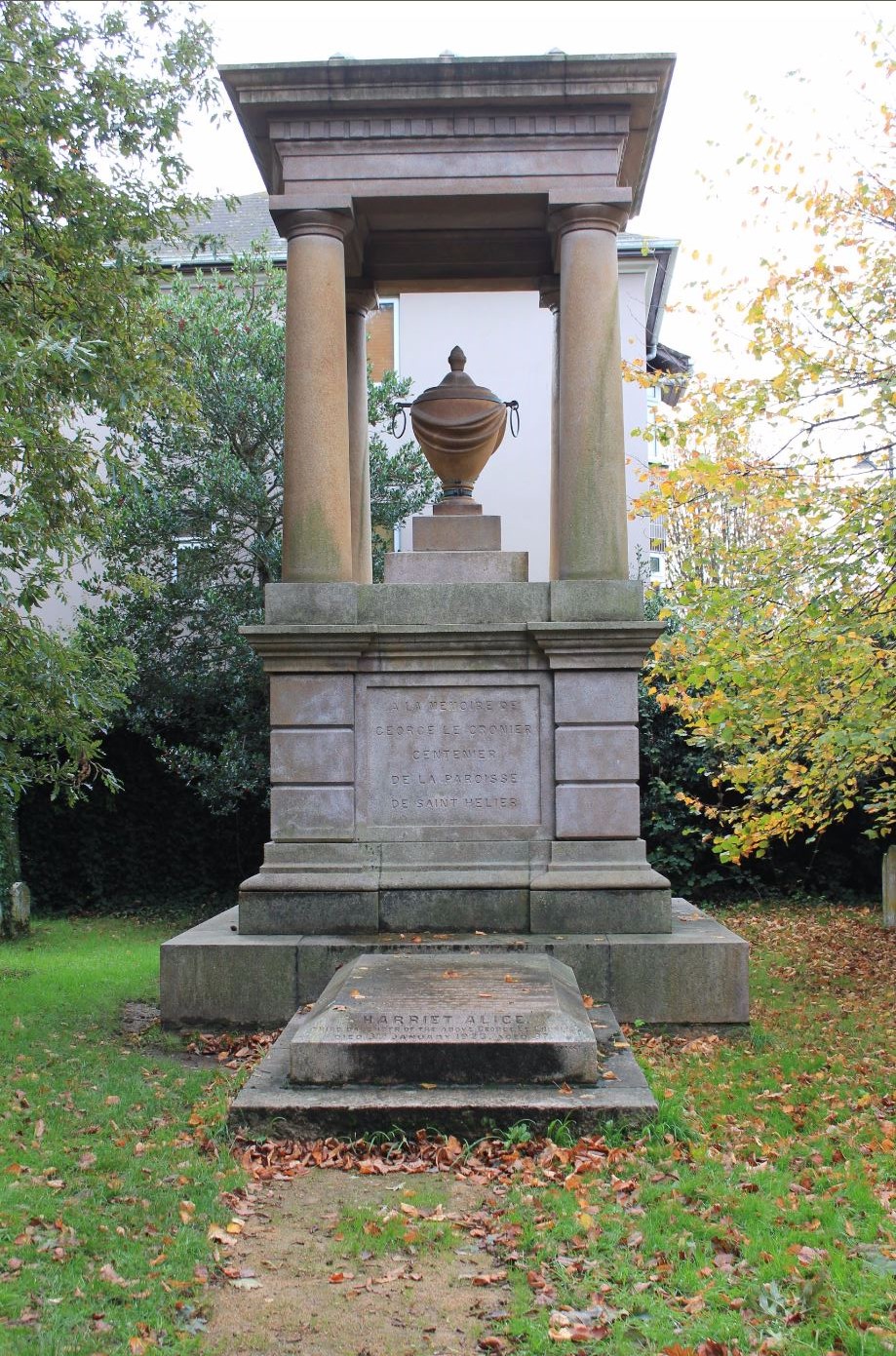 Using the MasterSearch on TheGenealogist , Le Noble appears in the Transportation Records, revealing that she was sent to Van Diemen's Land (Tasmania) penal colony for life. Clicking on the transcripts we can see that she left some five months after her trial in April 1846 on the ship Elizabeth & Henry.

Her crime may surprise us today, as the facts would surely point towards it being murder. Le Noble told people she was going to kill the next policeman who came through her door and had even had her knife sharpened on the morning of that same day.

We can find the unfortunate part-time policeman, who died days later from his stab wound, in Green Street Cemetery in St Helier. This was the first municipal burial ground to be opened in the island's capital, as its parish churchyard was full. We can also view Le Cronier's huge grave on TheGenealogist's Headstone Image Database. It seems the grateful citizens of St Helier made sure their respected centenier had a fitting memorial for losing his life in the course of unpaid duty.

GREAT SOURCES
This Victorian murder story illustrates the rich resources available to Diamond subscribers of TheGenealogist. Using the census collections, criminal records, newspapers and magazines plus the Headstone Image Database, we have been able to trace the story of the Madam of Mulberry Cottage and the murdered policeman.