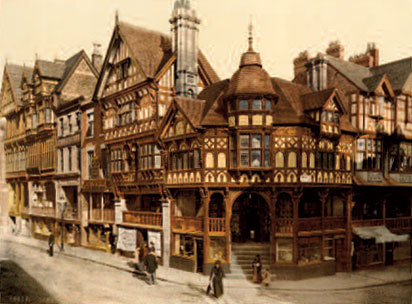 Also known as the County Palatine of Chester, Cheshire was occupied by the Romans for almost 400 years, then formed part of the Anglo-Saxon kingdom of Mercia. Mercian place names can be seen throughout the county often indicated by ‘-ham’, ‘-burgh’ or ‘bury’.

The Norman conquest in 1070 saw Cheshire harshly ruled by the occupiers as local people resented the invaders and rebelled. Markets had existed in Chester, Middlewich and Nantwich well before 1066, and subsequently in numerous other towns.

After initial skirmishes in 1642, there was an attempt by Cheshire gentry to keep the county neutral during the civil war. However, Chester was a Royalist stronghold, while the market towns of Stockport, Knutsford, Nantwich, Congleton, Middlewich and Northwich remained in Parliamentarian hands. The strategic position of Cheshire and the port of Chester meant that national commanders could not accept local neutrality and forces ended up clashing in the First Battle of Middlewich in March 1643; there were also sieges at Nantwich and Chester.

At the end of the 18th century, industrialisation of the Lancashire and Manchester mill towns saw Cheshire farms abandoned as workers sought a better living. These lands were absorbed into bigger estates culminating in 98% of Cheshire land belonging to only 26% of the population.

The completion of the Trent and Mersey Canal in 1777 and innovations such as the Anderton Boat Lift allowed Cheshire cheese and salt to become major county exports. Also the silk industry was developing in Macclesfield, triggered by Charles Roe building a watermill in Macclesfield in 1744. The railways came through Cheshire in the 1830s. The Grand Junction Railway was authorised by Parliament in 1833 and designed by George Stephenson and Joseph Locke.

Salt has been long worked in the county; it is obtained from rock salt and saline springs, the principal works being at Nantwich, Northwich, Middlewich and Winsford. The Roman salt beds beneath Northwich were rediscovered in the 1670 by employees of the local Smith-Barry family, while looking for coal. In the 19th century it became uneconomical to mine salt, so solvent extraction with water was used. Hot water was pumped through the mines that dissolved the salt and the resultant brine was pumped out and the salt extracted – but this process weakened mines and led to land subsidence.

Salt manufacture has remained one of the principal employers in Middlewich for most of the past 2,000 years, and remains so today. By 1908 there were nine industrial scale salt manufacturers in the town, with a number of open-pan salt works close to the Trent and Mersey Canal. Salt has also been used in the production of Cheshire cheese and in the tanning industry, both industries being consequences of the dairy industry based on the Cheshire Plain around Nantwich.

Coal and ironstone were worked in the districts of Macclesfield and Stockport. There were also manufacturers of cotton, silk and ribbons, carried on chiefly in the eastern towns; and shipbuilding on the Mersey.

Exclusive census analysis from the data at TheGenealogist.co.uk reveals that common Cheshire surnames include Highes, Jackson and Harrison; in 1841, Shaw, Booth, Walker, Burgess and Cooper were also common, as was Clarke in 1911.

Leading data website TheGenealogist.co.uk has a wealth of online records for Cheshire.