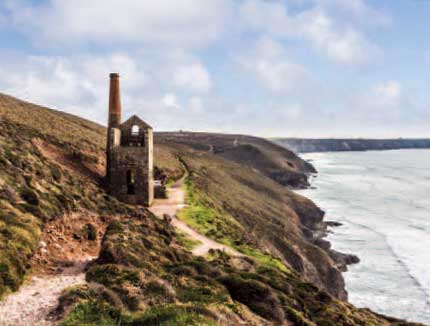 In the early days of its history, Cornwall’s geographical position – a peninsula reaching out into the Atlantic Ocean – put it firmly on the ancient maritime trading routes, and it enjoyed a special place in the history of Britain as a centre of trade. The fact that it was surrounded by sea also predestined fishing to become one of the major industries of the region. In later centuries, however, this topographical quirk became a liability, for a journey from London to Cornwall could take weeks; and despite the mineral richness of the granite batholith on which the county is perched (making its mining industry a matter of national importance) the region lapsed into poverty, isolation and fierce selfsufficiency. These ironies make Cornwall a fascinating region of study for the family historian. Its importance, combined with its isolation and independence, and its mineral richness combined with its frequent periods of economic depression, created a culture with an unusual degree of depth and integrity, and a remarkably vivid history.

If you have Cornish ancestors, there’s a good chance they were miners. The tin industry is perhaps the defining one of Cornwall, but the same geology that produced tin also produced copper, china clay and slate, each of which led to its own industry. As a result, the Cornish economy was one of the first in the world to industrialise. The Industrial Revolution introduced innovations to mining that brought wealth to Cornwall (for a few) and also brutal poverty. It also, however, brought Methodism, which was embraced by the Cornish and developed with a strong and distinctively egalitarian ethos.

Many people left Cornwall and emigrated to the New World in the wake of the potato famine (less well documented than the famine in Ireland, but devastating, nonetheless) and the slumps in the tin industry of the first half of the 19th century. So many miners left Cornwall that it was said “wherever in the world there’s a hole in the ground, you will find a Cornishman at the bottom of it”. If not miners, then perhaps your Cornish ancestors were fishermen. The exporting of salted pilchards to the rest of Europe was a staple industry of Cornwall for many years, and is still remembered today in the making of stargazey pie.

The isolation of much of Cornwall’s history bred an intense independence. The Cornish often resented the imposition of law and taxes by the faroff English government, but never more so than in the 15th to the 17th centuries, during which time there were several serious Cornish revolts. Cornish was still spoken natively in parts of the region at least into the 19th century. The disaffection that Cornwall felt with the centralised government of England is probably also responsible for the illegal practices of plundering shipwrecks and smuggling.

Exclusive census analysis from the data at TheGenealogist.co.uk reveals that common Cornwall surnames, as distinct from the country as a whole, include Williams, Richards, Rowe, Harris, Martin, Stephens, James, Pearce and Pascoe; in 1841, Johns was also common here; as was Mitchell in 1911. The censuses also reveal the importance of its long coastline, with many fishermen listed, and the tin and copper mining industries.

Leading data website TheGenealogist.co.uk has a wealth of records for Cornwall.