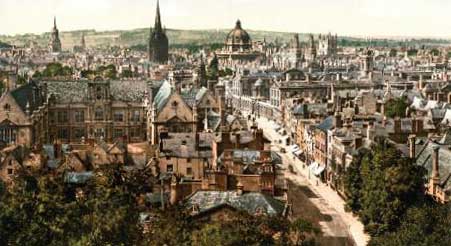 Oxford was first settled in Saxon times – it began, as its name suggests, with the establishment of a river crossing for oxen around AD 900. It became an important military frontier town between the kingdoms of Mercia and Wessex and was on several occasions raided by Danes. Oxford was heavily damaged during the Norman invasion of 1066. Following the conquest, the town was assigned to a governor, Robert D’Oyly, who ordered the construction of Oxford Castle.

Oxford’s prestige was enhanced by a charter granted by King Henry II, granting its citizens the same privileges and exemptions as those enjoyed by the capital of the kingdom; and various important religious houses were founded in or near the city. Parliaments were often held in the city during the 13th century. Kings Richard I and John were both born in Oxford.

The University of Oxford is first mentioned in 12th century records. Oxford’s earliest colleges were University College (1249), Balliol (1263) and Merton (1264). The relationship between ‘town and gown’ has often been uneasy – as many as 93 students and townspeople were killed in the St Scholastica Day Riot of 1355. A sweating sickness epidemic in 1517 was particularly devastating to the population, including many students and dons.

Originally the Priory Church of St Frideswide, Christ Church Cathedral (refounded in 1546) is unique in combining a college chapel and a cathedral in one foundation. The Oxford Martyrs (bishops Hugh Latimer and Nicholas Ridley, and archbishop Thomas Cranmer) were tried for heresy in 1555 and subsequently burnt at the stake for their religious beliefs and teachings.

During the English Civil War, Oxford housed the court of Charles I in 1642 after the king was expelled from London, although there was strong support in the town for the Parliamentarian cause. The town yielded to Parliamentarian forces under General Fairfax in the Siege of Oxford of 1646. It later housed the court of Charles II during the Great Plague of London in 1665–66.

In 1790, the Oxford Canal connected the city with Coventry. In 1844, the Great Western Railway linked Oxford with London via Didcot and Reading. A permanent military presence was established in the city with the completion of Cowley Barracks in 1876. Local government in Oxford was reformed by the Municipal Corporations Act 1835, and the boundaries of the borough were extended to include a small area east of the River Cherwell. The boundaries were further extended in 1889 to add the areas of Grandpont and New Hinksey, transferred from Berkshire, plus Summertown and part of Cowley.

During the First World War, the population of Oxford changed. The number of university members was significantly reduced as students, fellows and staff enlisted. Oxford was also experiencing rapid industrial and population growth, with the printing and publishing industries becoming well established by the 1920s. In 1929 the boundaries of the city were extended to include Headington, Cowley, Iffley and Wolvercote. Also during the 1920s, the economy and society of Oxford underwent a huge transformation as William Morris established Morris Motors Limited to mass-produce cars in Cowley.

Leading data website TheGenealogist.co.uk has a wealth of records for Oxford and