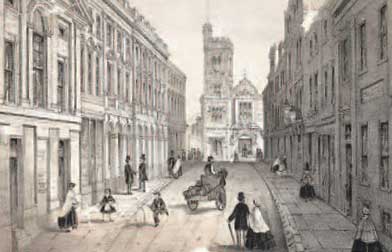 Swansea (Abertawe in Welsh) occupies a position at the mouth of the River Tawe, at the eastern end of the Gower peninsula. It was the main town of its region for much of the medieval period.

In the wake of the Norman Conquest, Gower became a marcher lordship which included the site of Swansea town, which was designated the capital of the area. A turf and timber motte and bailey castle was erected in Swansea in 1106 and was assailed by the local Welsh repeatedly over the next century.The South Wales coalfield reaches the coast in this region, and coal was already being exported by 1550, along with great quantities of limestone, quarried in the Mumbles area and on Gower, in high demand as fertiliser. Swansea was already a significant port, and although it was small (perhaps 1000 people in 1560), it had one of the earliest town charters granted in Wales and a constant influx of migrants from the Welsh countryside.

The population at this time was concentrated around the castle and river. Despite small-scale coal mining, the bulk of the area beyond the town was still largely farm land. Swansea Bay was considered an attractive region and in the 18th century some local notables attempted to promote it as a tourist resort, but their plans were frustrated by the rapid development of industry. In the Industrial Revolution, Swansea became a hub of the copper industry, nicknamed ‘Copperopolis’ (see the Discover Your Ancestors printed Issue 4, for a feature about this). By weight, more coal than copper ore is needed for the process of smelting copper from the ore, so it is more economical to build the smelter near the coal source. Swansea had very local mines, a navigable river, a nearby supply of limestone (necessary as flux), and trading links across the Bristol Channel to Cornwall and Devon, sources of copper ore.

More and more riverside wharfs were built. Tramways, waggonways and railways proliferated and connected the different works and the collieries supplying them. The Cambrian copper works closed down as a smelter but reopened as a pottery in 1764: potterymaking was another industry which required vast quantities of coal. The Mumbles Railway started in the first decade of the 19th century as an industrial tramway: a horse pulling a cart along tramplates. It had a specific branch line into Clyne valley where Sir John Morris, one of the railway's owners, owned coal mines. Despite some early journeys made by tourists, it was not until the 1860s that the railway began to carry passengers regularly, by which time it had acquired rails instead of tram plates.

Civil disturbances were a regular feature of the 1840s in Swansea. This was the period of the Rebecca Riots, of Chartism in the valleys to the east with the Merthyr Rising and the Newport Rising, and general discontent. Industry meanwhile brought immigration: by 1881 more than a third of the borough’s population had been born outside Glamorgan, and just under a quarter outside Wales.

The 19th century saw various outbreaks of cholera. Sewage and pollution were also part of the cause of the decline of the oyster trade centred on Mumbles, also known as Oystermouth.

The construction of the Taff Vale Railway and the Bute West Dock in the 1840s resulted in Cardiff surpassing Swansea as the principal coal port in South Wales, and in the late 19th century, Swansea copper smelters also faced increased foreign competition, and industry gradually declined, although tinplate production thrived during the two world wars. During WW2, Swansea was a target for Nazi bombing raids –much of the town centre was destroyed in the Three Nights’ Blitz of February 1941.

Exclusive census analysis from the data at TheGenealogist.co.uk reveals that common Swansea surnames include Rees, Morgan, John, Jenkins, James and Morris; plus William, David, Griffith, Bevan, Hopkin, Richard and Jenkin were common in 1841, as were Lewis, Griffiths, Richards, Phillips, Harris and Hughes in 1911.

Leading data website TheGenealogist.co.uk has a wealth of records for Swansea and Glamorgan.