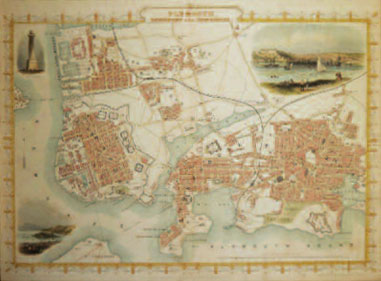 What became Plymouth was already established as a fishing and continental tin trading port in the late Iron Age into the early medieval period. The Saxon settlement was originally called Sutton. The earliest records of the name Plymouth date from the 13th century, after the river Plym.

The town was often the target of enemies across the English Channel, especially during the Hundred Years War. In the late 15th century a castle was constructed close to the area now known as The Barbican.

During the 16th century, Plymouth was the home port for a number of successful maritime traders, among them William Hawkins, who made the first English expeditions to West Africa in the 1530s; and his son Sir John Hawkins, who led England’s first foray into the slave trade.

Sir Francis Drake, navigator, privateer and vice admiral of the British Royal Navy remains the city’s most famous from 1581 and is credited with bringing fresh water from Dartmoor to the flourishing town by means of an aqueduct now known as Drake’s Leat.

In 1606 the Plymouth Company (the Plymouth Adventurers) was issued with a royal charter by James I with the purpose of establishing settlements on the coast of North America. A few years later, Plymouth was also the departure point of the Mayflower in 1620, aboard which the Pilgrim Fathers set sail.

During the English Civil War Plymouth, in common with the other major port towns, sided with the Parliamentarians; it successfully resisted a series of sieges.

In the nearby parish of Stoke Damerel, new dockyards at the mouth of the Tamar were commissioned by William of Orange in 1691 to support the Royal Navy. The settlement that developed here was called ‘Plymouth Dock’ at the time, and a new town (later Devonport) grew up. The 18th century marked a period of continued expansion and development for the ancient port town. Similar growth took place in the two neighbouring towns of Stonehouse (home to the Royal Marine Barracks) and Devonport.

The urban populations of Plymouth, Devonport and Stonehouse traded a variety of mineral ores such as copper, lime, tin and arsenic from the rural hinterlands via mining ports such as Morwellham Quay.

The railways arrived early in Plymouth, with industrial tramways serving the naval dockyard as early as 1724, and steam arriving with the South Devon Railway in 1848.

High rents in the town’s cramped, ancient tenements had resulted in overcrowding and unsanitary conditions documented in an 1852 report which suggested that conditions were the worst in Europe with the exception of Warsaw. The damning findings of the report resulted in large-scale slum clearances.

During WW1, Devonport provided employment to around 20,000 workers, but after the war the ending of the naval arms race and the Great Depression led to large declines in its workforce.

Due to its strategic proximity to the northern coast of France and its naval pre-eminence, the city was heavily bombed by the Luftwaffe during WW2, known as the Plymouth Blitz. In June 1944 Plymouth was one of the principal staging posts for the Normandy Landings.

Exclusive census analysis from the data at TheGenealogist.co.uk reveals that common Plymouth surnames include Hill, Martin, Harris, Bennett, Rowe, Baker, Adams, Mitchell and Phillips; plus Elliott, Tucker and Davis were common in 1841, as were Rogers, Pearce and James in 1911.

Leading data website TheGenealogist.co.uk has a wealth of records for Plymouth. Here is a quick run-down of what you can find (in addition to national collections):