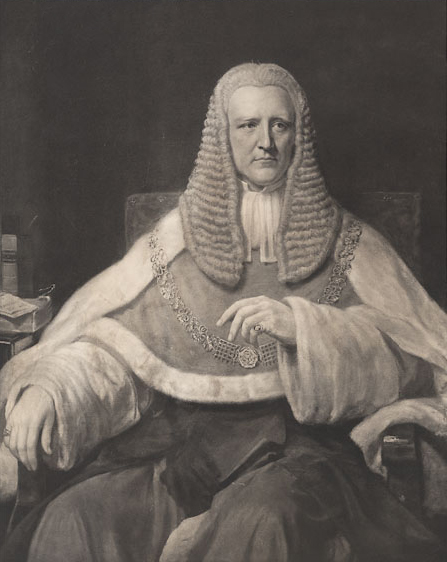 Tracing an ancestor's career path, through the many records available online, can often reveal to us some interesting family stories – especially when they chart the path to great heights of a forebear. The choice of profession by one branch of the family may be very different from the path followed by others and we may speculate that this could lead to tensions in the family.

If we were to look for John Taylor Coleridge, the second son of Captain James Coleridge and his wife, born 1790 in Devon, then we will find that their child was destined for the legal profession and would eventually rise to take a seat on the bench, as a member of the judiciary. Meanwhile the captain's brother, the English poet Samuel Taylor Coleridge, who wrote 'The Rime of the Ancient Mariner' and 'Kubla Khan' had himself risen to become a celebrated poet.

In April 1845 a report in the Illustrated London News, of the trial of woman convicted of poisoning her brother, alerts us to Sir John at the height of his profession as he passes the 'awful sentence of death' on the unfortunate prisoner at the bar.

To find out more about this judge, a search for him in The Genealogist's Occupational records can be easily done by selecting the Law Lists. This reveals to us that he had risen through the ranks of English law to become one of The Judges of England and his entry in The Book of Dignities – Rolls of Occupational Personages of the British Empire 1649 – 1846 shows us that he had been appointed as a judge of the King's Bench in 1835.

By then searching the 1841 Census we find that Sir John is listed, with his occupation recorded as a judge, in the Bloomsbury area for that year. If we then follow him through to the 1871 count, this eminent Devonian is found retired back to his home in Ottery St Mary.

Sir John had, by this time, been appointed a Privy Councillor on his retirement from the bench and this is reflected in the occupation column of the census – though it looks very much like it has been incorrectly spelt 'Counciller' by the enumerator in this return!

Using other document collections, from within the Occupational Records on The Genealogist, we can learn even more about this important lawyer and his family by looking in The Dictionary of National Biography. This digitised book reveals much about notable people in Britain from 1654 tp 1930. In this example we find out that he had been born in Tiverton, that his grandfather had been the Vicar Of Ottery St Mary and that Sir John's mother was Frances Duke, who was connected with the Duke family of Otterton and Power Hayes in Devon. The judge had been educated at Eton and Oxford, and in 1812 he gained various educational awards before joining the Middle Temple and being called to practise at the bar in 1819.

Widening our search to the Newspaper and Magazine records on The Genealogist we can find the Illustrated London News of February 1876 reporting the death of the former judge of the Court of Queen's Bench and informing its readers of his connection to his uncle, the poet Samuel Taylor Coleridge.

Following in his father's footsteps

Sir John Taylor Coleridge was not, however, the only member of the family who was a lawyer and a judge. One of his sons, also called John, was to follow in his father's footsteps and in fact climbed still higher up the judiciary. John Duke Coleridge ( 3 December 1820 – 14 June 1894) would also rise in the honours system to ultimately become a peer of the realm.

In the 1851 Census we can first find John Coleridge junior in Ottery St Mary, Devon, visiting his brother Henry, the Vicar of Alphington. John Duke Coleridge's occupation is simply given as that of a barrister. Fast forward to 1871, however, and he is now recorded as living in Paddington. The barrister has risen high to hold one of the top Government positions – the Solicitor General of England and Wales. By 1881 John Duke Coleridge was still at the same address. 1 Sussex Square, but he has now moved up to be the Lord Chief Justice of England. Meanwhile his clergyman brother has converted from the Church of England to Roman Catholicism and is found, in the census, not far away in London as a boarder in a Mount Street address that he shares with a number of other Catholic priests, lay brothers and choristers.

A record of John Duke Coleridge in the Eton register, that we can find in the Educational records on The Genealogist, reveals that he had been appointed a Recorder of Portsmouth ( a judicial officer) and was late a Fellow of Exeter College at Oxford. 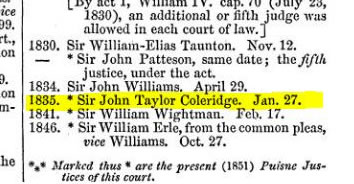 By then looking for him in The Dictionary of National Biography on The Genealogist, as we had done with his father, we can discover more about his life and how he had proceeded from barrister, in the 1851 Census, to that of Lord Chief Justice by 1881.

The digitised book tells us that in 1843 he was admitted to the Inner Temple, was called to the bar in 1846 and further details reveal that in 1865 he became a Member of Parliament for Exeter and remained until accepting the position of Chief Justice of the Common Pleas in 1873. With the Liberals winning power, in 1868, Coleridge had been knighted and appointed Solicitor General. Then in 1871 he stepped up an office to become Attorney General and two years later he was named as the Chief Justice of the Common Pleas. With the abolition of the office in 1878, he would be the last person to hold this title. At this time he was raised yet again to become the Lord Chief Justice of England. Before that on 10 January 1874, and while his father was still alive to see it Sir John Duke Coleridge was created the 1st Baron Coleridge of Ottery St Mary.

'He saw a lawyer killing a viper'

In 1834, however, the poetical branch of the family in the guise of Samuel Taylor Coleridge had published 'The Devil's Thoughts', which contained a verse that was not particularly kind to lawyers:

He saw a lawyer killing a viper
On a dunghill hard by his own stable;
And the devil smiled, for it put him in mind
Of Cain and his brother, Abel.

We do not know what these eminent lawyers and judges thought of practitioners of their calling being likened to a snake, especially when it came from the uncle of a judge of the Queen's Bench and the great-uncle of the man ho would rise to become the Lord Chief Justice of England and Wales! What we have been able to see, using the diverse records available on The Genealogist, is that it certainly didn't stop them in their tracks.