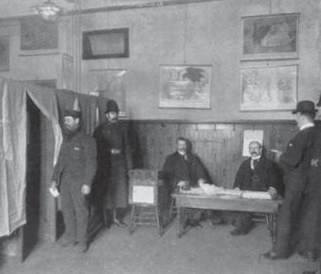 Voting by ballot at an election, from TheGenealogist’s Image archive

In time for the snap general election, TheGenealogist.co.uk has added to its Polls and Electoral records by publishing online a new collection of poll books ranging from the late 19th century to the early 20th century.

These new records, now available, offer a tantalising snapshot of our ancestors’ interaction with the Church and State of the past:

The records cover 35 different registers of people who were entitled to vote in Wakefield, West Yorkshire and other constituencies situated in Hampshire, Gloucestershire, Somerset and New Westminster in Canada. These have been added to the site’s Poll and Electoral Roll collection covering millions of records.

At the same time TheGenealogist continues to expand its vast Parish Record collections with the addition of 100,000 new individuals added for the County of Worcestershire and additionally the Registers of the Parish Church of Rochdale in Lancashire that covers the period between 1642 and 1700.

Also newly released are some records that will take the researcher all the way back to ancient times!

The Roll of Mayors of the Borough and Lord Mayors of the City of Leicester records the names of men holding that office from between the 10th year of the reign of King John in 1209 and all through history to 1935.

Plus more than 100,000 Worcestershire Parish Records have been added through a partnership with Malvern Family History Society.