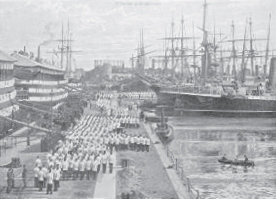 Portsmouth in Hampshire is the UK’s only island city, and has the world’s oldest dry dock (dating to Tudor times).

The area around Portchester Castle was settled in Roman times, and known as Portus Adurni. There is no mention of Portsmouth in the Domesday Book, but the neighbouring settlements of Buckland, Copnor, Fratton, Cosham, Wymering and Drayton are listed.

Richard I summoned an army and naval fleet to Portsmouth, and in 1194 gave permission for the city to hold a 15-day annual fair (the Free Market Fair), weekly markets and a court. King John’s desire to invade Normandy resulted in the establishment of Portsmouth as a permanent naval base, which it has remained ever since. The first docks began construction in 1212.

During the 13th century, Portsmouth was commonly used by King Henry III and Edward I as a base for attacks against France. By the 14th century, commercial interests had grown considerably, despite rivalry with the dockyard of nearby Southampton. Common imports included wool, grain, wheat, woad, wax and iron, however the port's largest trade was in wine from Bayonne and Bordeaux.

During the English civil war, the city was initially held by the royalist faction before falling to parliament after the Siege of Portsmouth.

Portsmouth’s overland links to London started to be improved with an early turnpike trust being set up in the late 17th century.

The first local newspaper in the city was the Portsmouth and Gosport Gazette. First published in 1745 it continued to publish until around 1790.

On 13 May 1787 the First Fleet of ships left Portsmouth Harbour bound for Australia, taking the first British settlers there. They would arrive in Botany Bay on 18 January 1788. Admiral Nelson left Portsmouth for the final time in 1805 to command the fleet that would defeat the larger Franco-Spanish fleet at Trafalgar. The Royal Navy’s reliance on Portsmouth led to the city becoming the most fortified in Europe, with a network of forts circling the city.

From 1808, the Royal Navy’s West Africa Squadron, tasked to stop the slave trade, operated out of Portsmouth.

New transport links were constructed during the 19th century. In 1823, the Portsmouth and Arundel Canal along with the Wey and Arun Canal provided an inland waterway route to London. Portsmouth gained its first railway link in 1847 with a direct route to London arriving in 1859.

In 1904, the boundaries of Portsmouth were extended to finally include the whole of Portsea Island. The boundaries were further extended in 1920 and 1932, taking in areas of the mainland.

In 1916, the city experienced its first aerial bombardment when a Zeppelin airship bombed it during the First World War. As a major naval base and dockyard the city was also bombed extensively during the Second World War.

Southsea beach and Portsmouth Harbour were also military embarkation points for the D-Day landings on 6 June 1944.

Exclusive census analysis from the data at TheGenealogist.co.uk reveals that common Portsmouth surnames, as distinct from the country as a whole, include Hill, Allen, Young, Martin, Moore, Baker and Davis; in 1841, Green, Cook, Hunt, Mitchell, Harding and Adams were also common here; as were Harris, King, Knight, Clark and Miller. The censuses also reveal the importance of its maritime history to local trades, with mariners, shipwrights, seamen, and soldiers, among its most common occupations.

Leading data website TheGenealogist.co.uk has a wealth of records for Portsmouth and Hampshire. Here is a quick run-down of what you can find (in addition to national collections):