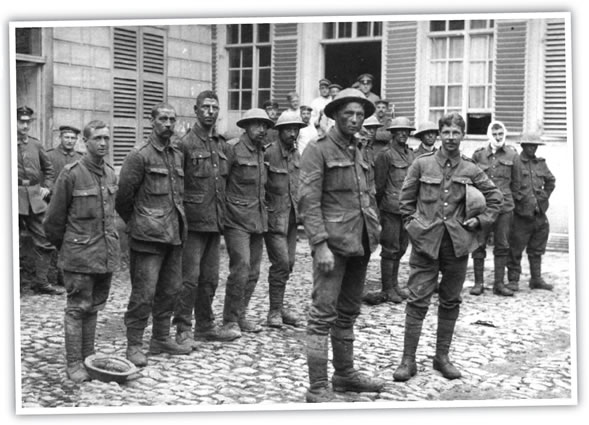 Leading data website TheGenealogist.co.uk has released a collection of more than 80,000 records of both officers and other ranks who were taken prisoner in World War One.

Prisoner of war records from the Great War are notoriously difficult to obtain, particularly for the lower ranks and this is the first time the records of both officers and other ranks can be found together in one collection on a family history website.

Many records were destroyed in the 1930s and the Blitz of 1940 so these surviving records are a valuable source for tracing those military ancestors. Prisoners of war are often overlooked in WW1 commemorations but many thousands of British and Commonwealth troops suffered the dreadful hardships of captivity, some for almost the full duration of the war.

Now TheGenealogist has brought together a comprehensive set of records of both officers and other ranks (who were the vast majority of prisoners) providing the most in-depth set of WW1 prisoner of war records now available.  If you're struggling to find an ancestor's war record, it's well worth searching this collection.

The records include British and Commonwealth military personnel and have been brought together from a variety of sources.  The records are fully searchable and provide the main details including, forename, surname, rank, regiment and the date the information was received.  All of them can be found in the Prisoner of War record set within the Military Collection at TheGenealogist.

The records also show in certain cases what happened to a soldier while in captivity. The records cover the army, navy and air force of the many thousands of British and Commonwealth servicemen held captive. 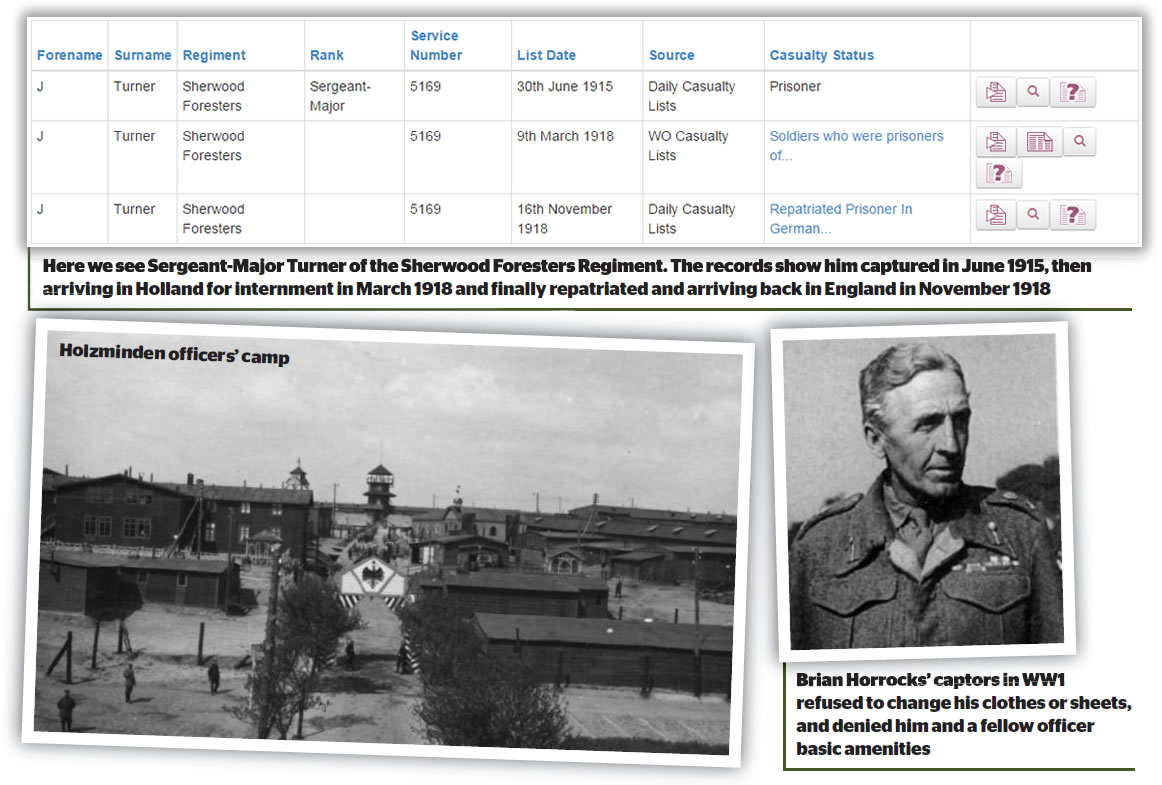 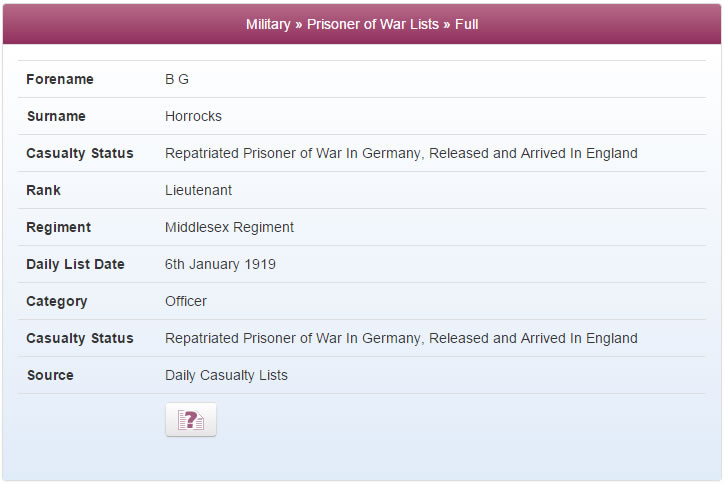 Here is the then Lieutenant Horrocks in the Prisoner of War lists at TheGenealogist.co.uk, showing his repatriation

From early 1915, the German authorities put in place a system of prisoner of war camps – in total there were just under 300.  The camps included Holzminden, Stendal, Spandau and Soltau, which was said to accommodate 30,000 prisoners.

The officers were generally kept in camps that were less crowded and conditions were slightly better than the lower ranks.  The average officers camp housed about 500 to 600 men, the ordinary soldiers camp (or Mannschaftslager) could house between 12,000 to 50,000 men, often in dreadful conditions.

The Officers Camps or 'Offizier-slager' comprised 73 camps by 1918.  The most famous was Holzminden Camp (pictured above).  Used for British and British Empire officers, and located in Holzminden, Lower Saxony, Germany, it opened in September 1917 and closed with the final repatriation of prisoners in December 1918.

The Holzminden camp saw the first 'great escape' of the war.  In July 1918, 29 officers, including the most senior British officer, Lieutenant Colonel Charles E H Rathbone, escaped through a tunnel and 10 evaded capture to get to the neutral Netherlands and freedom.  The escape tunnel collapsed on the 30th escapee otherwise more men would have escaped.

There were a number of notable prisoners at Holzminden Camp including Lieutenant Brian Horrocks (pictured above), who later became a famous senior office in World War Two as a close colleague of General Montgomery.

As well as the larger camps, the Germans also had transit camps, where prisoners would be held for a short time and also 'reprisal camps' where prisoners caught escaping would be held.  Reprisal camps were often close to the front lines and conditions were brutal.  Prisoners would assist with the rebuilding of trenches or removing bodies for burial.  British troops could find themselves in a reprisal camp near the Russian front with scarce food and sub-zero temperatures.

The varying degrees of camp conditions in WW1 did favour officers.  The Prussian military were keen for all British officers to turn out on parade dressed smartly as an officer should be.  Some camps even allowed officers to receive items of clothing from their tailors in Britain if required.
This was a stark contrast to the other end of the scale with the larger camps for the lower ranks.  The camp at Wittenburg, for example, gained notoriety for atrocious conditions.  Insufficient food, grossly overcrowded with 15,000 men in a small area, no changes of clothing and insufficient sanitation, when a typhus epidemic broke out in late 1914, the Germans simply confined all the prisoners together making the epidemic worse. The Germans finally sent in six British doctors to take the place of the medical team who had long since departed.  With very little supplies, three out of the six British doctors subsequently died of typhus too.

At TheGenealogist.co.uk we find for example the record of one of the brave British doctors (held against the Geneva Convention for medical personnel), Major Fry, in the prisoner of war records:

Major Fry was one of the three doctors who sadly succumbed to the typhus epidemic.  The doctors were assisted by the few able-bodied men still able to assist and two of these men can also be found in the collection.

Sergeant Thomas Miller, of the Highland Light Infantry Regiment became the unofficial leader of the prisoners in Wittenburg; he assisted the doctors and was later mentioned in Despatches for his tireless work in dreadful conditions.  He was listed as an official prisoner of war in July 1915.

Another prisoner who bravely went about his duty was Lance Corporal Alfred McDonald of the Royal Irish Regiment.  A fellow soldier wrote, “he died a hero's death in Wittenburg”.  As a volunteer assisting the doctors and helping the sick, he put himself in the most danger and became a victim of the typhus epidemic in the camp.  He was initially reported as missing, but had sadly died before it was known by the British authorities he was a prisoner of war, again revealed by these online records.

Lance Corporal McDonald is buried and commemorated in the war cemetery at Thiepval near the Somme.

The Prisoner of War records are now available to view for all Diamond subscribers at TheGenealogist.co.uk

The Miner Who Fled

On the fully searchable prisoner of war records, at www.TheGenealogist.co.uk  we can trace the records of a private in the Welsh Regiment whose great adventure made the news only recently.  Private Robert Phillips, a miner by occupation, survived the horrific losses in the 2nd Battle of Ypres but was captured later at the Battle of Vermelles.  He was transported to firstly Munster, then Mettingen camps, then finally to Homsburg camp in Western Germany. Ill-treated by brutal guards and forced to work down a mine with very little food, Robert's determination to escape ensured his survival when he broke out and walked the epic journey of 200 miles, narrowly escaping capture, over to neutral Holland. 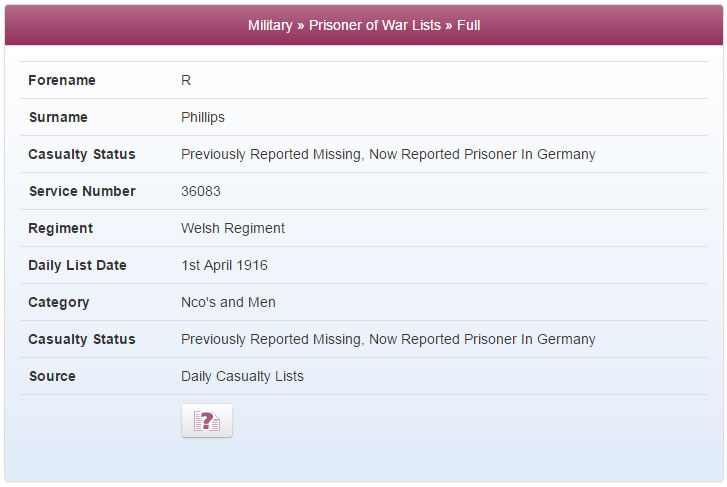