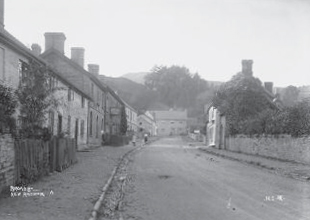 Radnorshire is one of the 13 historic counties of Wales, a sparsely populated and rural region throughout history. Much of the county is forest, moorland and low mountains. The chief towns are Knighton, Llandrindod Wells, Presteigne and Rhayader.

The county was formed from the cantrefs of Maelienydd and Elfael and the commotes of Gwrtheyrnion and Deuddwr (the area formerly known as Rhwng Gwy a Hafren) by the Laws in Wales Acts 1535-1542. New Radnor was the original county town, although the assizes sat at Presteigne and ultimately the county council formed in 1889 met at Presteigne as well. Some administrative functions, and later the district council (part of Powys), were based at the larger and more central Llandrindod Wells, which is currently the largest settlement.

Among the most notable historic events are the founding of Cwmhir Abbey in 1176 and the Battle of Bryn Glas, near Knighton, fought on 22 June 1402 during the rebellion of Owain Glyndŵr.

The county’s poverty was remarked upon in the 17th century by an anonymous visitor:

Never a park, and never a deer,

Never a squire of five hundred a year,

Save Richard Fowler of Abbey-Cwm-hir

Apart from a handful of parishes along the English border the Welsh language remained the first language of the county well into the second half of the eighteenth century. By 1850 the language had retreated to the western parishes of Rhayader, Llanyre, Cwmdauddwr, St Harmon and Nantmel. By 1900 Welsh was still spoken by a sizeable minority west of the town of Rhayader, the language disappearing as the century progressed.

Until the Acts of Union, Radnor was outside the Principality of Wales. This peculiar Marcher status and its want of Welsh speakers gave weight to the traditional local expression, ‘Neither Wales nor England, just Radnorsheer’.

Knighton became a borough in 1203, with a charter permitting a weekly market and annual fair. Knighton first prospered as a centre of the wool trade in the 15th century and was later an important point on the two drover routes from Montgomery to Hereford, and from London to Aberystwyth.

The Knighton Railway Company was formed by local landowners and businessmen to build a line from Craven Arms to the town. The line reached Knighton in March 1861.

During the mid-18th century, the ‘healing qualities’ of the local spring waters at Llandrindod Wells attracted visitors to the region. Enclosure of the common in 1862 enabled the expansion of the town with the construction of new streets, hotels, shops and houses.

The development of a thriving cloth industry in the Tudor period brought short-lived prosperity to Presteigne, ended by three new epidemics of plague in three successive generations. Thereafter it became a market town and, until the later 16th century, a centre for processing locally grown barley into malt.

Rhayader has always been a natural stopping point for travellers – first the Romans, then monks and drovers. Between 1839 and 1842, the Rebecca Riots reached the town, with no less than six of its tollgates being demolished by local farmers dressed as women. In the 1890s the nearby Elan Valley changed forever, with thousands of workers involved in building a massive complex of dams and reservoirs to supply Birmingham.

Exclusive census analysis from data at TheGenealogist reveals that the surnames most distinctive to Radnorshire in 1881 were: Worthing, Bufton, Brick, Bound and Hamer; the five most common were Jones, Davies, Price, Evans and Lewis. Throughout the 19th century and into the early 20th, the county’s population never exceeded about 25,000, and in fact it remains similar today.

Leading data website TheGenealogist.co.uk has a wealth of records for Radnorshire. Here is a quick run-down of what you can find (in addition to national collections):