Researching the hidden past of your area

In the late 1830s the country underwent a massive survey of land when the government undertook a review of the tithes paid to the church and others. These tithe apportionment documents and accompanying maps can really help us to explore the fields, woods and houses in our ancestors' home villages and towns.

TheGenealogist, in partnership with The National Archives, is making it possible for family historians to search over 12,700,000 records from across England and Wales and to view these valuable original apportionment documents with linked maps, all on one website.

While researching Brentford High Street in Ealing, London, we discovered an unusual number of pub names that jumped off the tithe map. This annotation of taverns and inns isn't common practice on tithe maps and so it was intriguing enough to call for a little more research to be done.

One of the inns in Brentford turns out to be owned by Sir Felix Booth (1775-1850), descendant of the founders of Booth's Gin Distillers, and wealthy enough to have financed John Ross' expedition to find the Northwest Passage through the Arctic Ocean. Looking into the area closer we find that Sir Felix owned a significant amount of land in the parish of Ealing near the Thames, much of which was related to alcoholic beverages.

He already had a distillery in another part of London, but on the Brentford High Street one of the largest plots was taken up with another of his distilleries and this one came with a farm attached.

From the tithe documents we can see that Sir Felix's plot 230, on which was built the Brentford distillery, had easy access to the riverfront to bring in the raw materials of grain for the making of gin. This example shows that is isn't just out in the countryside that tithes were payable and so the records and maps can even help us with our city-dweller ancestors, such as those from London in this case.

We can also see, in the tithe records for Brentford, that one of the neighbouring businesses to Sir Felix Booth's distillery was a brewery. The owner and occupier of this property, at the time of the 1840 tithe survey, was one John Hazard. Perhaps an apt name should customers need to be warned about the perils of drink! The Red Lion Brewery had once also been in Booth's ownership and in 1830 had had its name changed to the Royal Brewery in honour of a visit from King William IV and Sir Felix's award of the baronetcy. The Red Lion trade mark, however, was retained and used to this day on Booth's Gin.

There was also a house owned by Sir Felix Booth (listed as plot 87) on the High Street, and occupied by a John Booth. As Felix died unmarried and childless it's difficult to be sure of the family relationship. 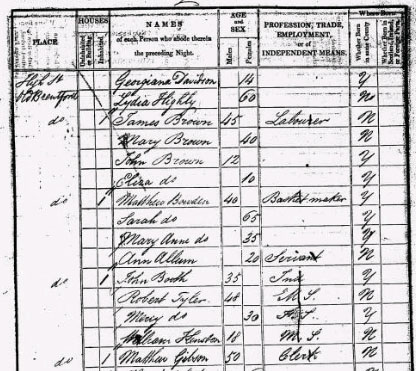 The census can help fill in the gaps from the information you get from
the tithe surveys, showing who was occupying the homeowner's properties

If we turn to the 1841 Census, also on TheGenealogist, John Booth is listed as being 35 and of independent means. The address given is Old Brentford High Street, which mirrors the property found on the tithe maps.

When Sir Felix died his baronetcy was inherited by his elder brother's son and from The Dictionary of National Biography, also on TheGenealogist, we can see that his nephew was named J Williamson Booth. Could this be one and the same person?

Going on to research news reports for the time we can discover that in 1838 a farm in Ealing Lane, close by to the distillery and also owned by Sir Felix, was the subject of a haystack fire. The worry at the time was of the fire spreading to the distillery.

Digging deeper, the Illustrated London News of 10 December 1842 gives us an insight into how this farm was an important entity in its own right. A report informs us about the farm taking delivery of a number of cows from abroad and then being visited by several graziers and farmers to view the new livestock. The lucky animals were to be fed on the grains and wash of the liquor manufacturing process and housed in the "spacious feeding-room attached to the distillery".

Brentford was already well established by this time with malt-houses, breweries and distilleries using grain that was brought in via the river. We have seen that Booth's distillery was checked by jowl not only with a brewery but also a large number of pubs and hotels. It certainly was an unusual feature of this particular tithe map that the surveyor had chosen to write some of the names of the pubs on the plan. We can see that within a few yards were many places to get an alcoholic tipple, including The Barge Aground, The Bull, The Running Horse, The Half Moon and Seven Stars, The Royal Hotel (built by Sir Felix Booth), The Red Lion and also The King George.

The National Tithe Records are available online now at TheGenealogist where you can also find many other useful records such as censuses from 1841 to 1911, as well as newspaper and magazine collections, to help further your family history research.