Scanning on the go

Adding flesh to the bones of a family tree to really tell the story of your ancestors will often involve attaching photographs, images of certificates and even medals to files stored on your computer. This is easily done when you have a digital copy of the item; the challenge comes when you are visiting relatives who have a treasure trove of precious artefacts and documents to show you. The collection may contain photos, important documents, fragile records of personal and family history, detailed coins, jewellery, medals, hand-drawn art and other keepsakes all of which you would like to have a copy of and you really don't want to let the opportunity to scan them pass.

In these situations, when I'm away from my home computer and desktop scanner, I reach for my camera phone with less than the desired effect. On visiting a cousin recently, I was shown for the first time a photo of my great-grandmother. It had been taken when she was a young woman in the late 19th century. The black and white picture was in a frame and hanging on the wall of one of the rooms in my cousin's house. I was captivated by it and I really wanted a copy of this unique image for myself. There was a slight problem; I could sense that asking for the photo to be taken out of the frame for me to copy would not be welcomed by its present owner. I resorted to photographing the picture with my phone but this resulted in the sun's reflection giving me a less than satisfactory result. On returning to my home, I decided to investigate the options available to me to get a better digital image of my great-grandma.

From a little research I quickly discovered that it was possible to obtain a portable scanner with the feature of a detachable lid that would allow the user to hold the device against a picture and make a scan that way. By using the window in the device's back, it would allow the scanning of photos that are still in the album, or in the frame. As I also have some photos in one of those albums with the sticky back plastic pages that I'd like to copy, I realised that I'd found the answer to several of my needs all in one place. The Flip-Pal mobile scanner seemed compact and it did not need a computer to operate it on site.

At a recent family history event I came across a fellow genealogist who had one of these useful machines and, because I was interested in what it could do, I asked him to give me a quick demonstration of its capabilities. The task that I set my friend was to scan one of those long school photographs that most families have tucked away.

I had just been given a small and dusty suitcase of memorabilia from my cousin to look through. He had thought I'd be interested in it because it contained an old school photograph. This was of the entire school compliment of children and teachers, pictured outside the establishment in 1941 – what was exciting was that it came from a period when I knew that my dad was a pupil there. I was not sure which of the many children was him, but had narrowed it down to a possible two or three likely candidates.

What I wanted to do was to transfer a copy of the picture to my computer, so that I could examine the faces more carefully at leisure.

I had thought that this exercise would be difficult, especially when I saw just how compact the device was, but actually it was no problem at all. Having arranged a time, my friend brought his Flip-Pal around to my house and he simply unclipped the lid and then proceeded to take multiple scans of the lengthy photograph and save them on the SD card inserted into the scanner.

As he worked I noticed that there were guidelines in the Flip-Pal scanner window. He was moving along the long school photo and was taking several overlapping shots while explaining that it came with some smart software called EasyStitch. This program would enable him to easily reassemble the long photo digitally for me on his computer. One the 26 or so images had been scanned, all he needed to do was to pop the SD card out of the device and slot it into the computer using either the supplied card reader or straight into the SD slot on his laptop. The software would do all the work, threading the images together into one.

The result was impressive, as is the Flip-Pal mobile scanner itself. It is compact and simple to operate with a one-button operation. It has a high, 600dpi resolution and quick scan time. The Flip-Pal scanner is battery operated and as such is extremely portable to use wherever the user likes and without the need for a computer to be attached, as brilliantly demonstrated to me on that day.

I was now convinced and quickly went online and found that it was available from S&N Genealogy Supplies here in the UK. I am now looking forward to my own Flip-Pal arriving so that I can go back to my cousin's house and digitally capture that image of my Great-Grandmother. 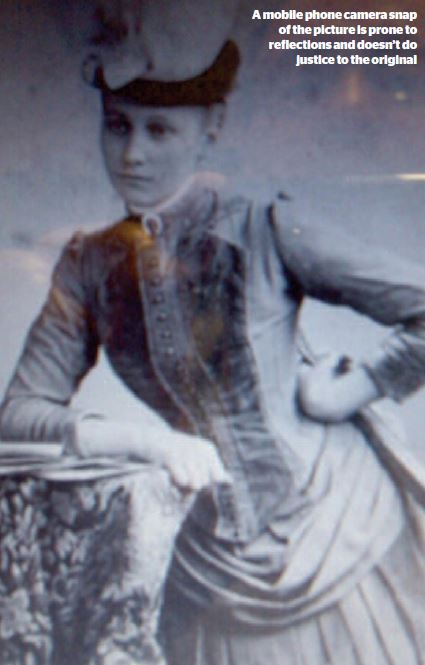 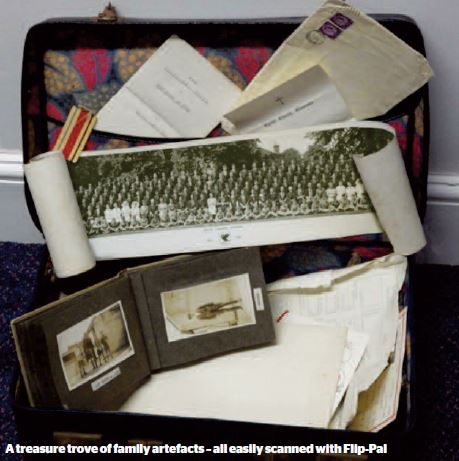