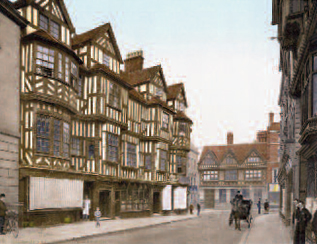 Shrewsbury is only nine miles from the Welsh border, a situation which is reflected in its history of conflict between the English and Welsh. In the 6th century it was even possibly the capital of the kingdom of Powys, and before that the town was a significant Roman settlement. The town which developed into modern times was founded c800AD.

The Welsh besieged Shrewsbury in 1069, but were repelled by William the Conqueror. Roger de Montgomery was given the town as a gift from William, and built Shrewsbury Castle in 1074, taking the title of Earl. He founded Shrewsbury Abbey as a Benedictine monastery in 1083 (it was dissolved by Henry VIII in 1540). In 1138, King Stephen successfully besieged the castle held by William FitzAlan for the Empress Maud during the period known as the Anarchy.

It was in the 14th and 15th centuries when the town was at its height of commercial importance. This was mainly due to the wool trade with the rest of Britain and Europe, using the River Severn and Watling Street as trading routes.

In 1403 the Battle of Shrewsbury was fought a few miles north of the town centre between King Henry IV and Henry Hotspur Percy, with the king emerging victorious.

Shrewsbury continued to thrive throughout the 16th and 17th centuries due to its control of the Welsh wool trade. In this period a number of grand buildings were constructed, including Ireland’s Mansion (built 1575) and Draper’s Hall (1658). It was also in this period that Edward VI gave permission for the foundation of a free school, which was later to become Shrewsbury School.

During the English Civil War, the town was a Royalist stronghold and only fell to Parliament forces after they were let in by a parliamentarian sympathiser at St Mary’s Water Gate.

By the 18th century Shrewsbury had become an important market town and stop-off for stagecoaches travelling between London and Holyhead on their way to Ireland; this led to the establishment of a number of coaching inns, many of which, such as the Lion Hotel, survive to this day.

Local soldier and statesman Robert Clive – later known as ‘Clive of India’ – was Shrewsbury’s MP from 1762 until his death in 1774.

In the period directly after Napoleon’s surrender after Waterloo in 1815, the town’s own 53rd (Shropshire) Regiment of Foot was sent to guard him in his exile on St Helena. The Shropshire Regimental Museum is at Shrewsbury Castle.

Shrewsbury has also played a part in Western intellectual history, being the town where the naturalist Charles Darwin was born and brought up. The town is also home to the Ditherington Flax Mill, the world’s first iron-framed building, commonly regarded as ‘the grandfather of the skyscraper’. The Shrewsbury Canal, first used in 1794, linked the town with the Shropshire Canal and the rest of the British canal network, but the town escaped much of the industrialisation taking place in 19th century Britain due to its isolation from other large manufacturing towns and ports.

The town suffered very little from the bombing during the Second World War and thus many of its ancient buildings remain intact.

Exclusive census analysis from the data at TheGenealogist.co.uk reveals that Welsh surnames are unsurprisingly very common in Shrewsbury. Common Shrewsbury surnames, as distinct from England and Wales as a whole, include Griffiths, Morris, Price, Rogers, Pugh, Lloyd and Owen; in 1841, Richards and Parry were also common here; as were Hughes, Lewis and Harris in 1911.

Leading data website TheGenealogist.co.uk has a wealth of records for Shrewsbury and Shropshire. Here is a quick run-down of what you can find (in addition to national collections):