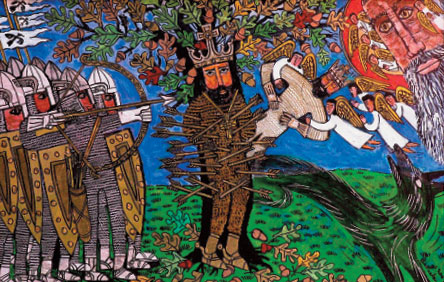 The county of Suffolk (meaning ‘southern folk’) was formed from the south part of the kingdom of East Anglia which had been settled by the Angles in the latter half of the 5th century. In the east of the county is Sutton Hoo, the site of one of England’s most significant Anglo-Saxon archaeological finds: a ship burial containing a collection of treasures including a sword of state, gold and silver bowls and jewellery.

Suffolk suffered severely from Danish incursions, and after the Treaty of Wedmore became a part of the Danelaw. Although it was reckoned as distinct from Norfolk in the Domesday survey of 1086, the fiscal administration of Norfolk and Suffolk remained under a single sheriff until 1575. The boundary of the county has undergone very little change, though its area has been considerably affected by coast erosion.

In 1173 the Earl of Leicester landed at Walton with an army of Flemings and was joined by Hugh Bigod against Henry II. In 1317 and the succeeding years a great part of the county was in arms for Thomas of Lancaster. In 1381 there was a serious rising of the peasantry chiefly in the neighbourhood of Bury St Edmunds. Although the county was for the most part Yorkist it took little part in the Wars of the Roses. It was from Suffolk that Mary drew the army which supported her claim to the throne. In the Civil Wars the county was for the most part Parliamentarian, and joined the Association of the Eastern Counties for defence against the Catholic Royalists.

Suffolk was originally among the most populous of English counties, perhaps owing to its proximity to the continent. Fishing fleets left its ports to bring back cod and ling from Iceland and herring and mackerel from the North Sea. From the 14th to the 17th century it was among the chief manufacturing counties of England owing to its cloth-weaving industry, which was at the height of its prosperity during the 15th century.

In the 17th and 18th centuries its agricultural resources provide the rapidly growing metropolis of London with food. In the 18th century Suffolk was famed for its dairy products, but the high prices of grain during the wars of the French Revolution led to the extensive breaking up of its pastures, and it has since been one of the principal grain-growing counties in England.

In the 19th century, various textile industries, such as the manufacture of sail-cloth, coconut fibre, horse-hair and clothing were established; silk-weavers migrated to Suffolk from Spitalfields, and early in the 19th century an important china factory flourished at Lowestoft.

In the arts, Suffolk is noted for having been the home to two of England’s best regarded painters, Thomas Gainsborough and John Constable – the Stour Valley area is known as ‘Constable Country’ – and one of its most noted composers, Benjamin Britten. Significant ecclesiastical figures from Suffolk include Simon Sudbury, a former Archbishop of Canterbury; the Tudor-era Catholic prelate Cardinal Thomas Wolsey; and author, poet and Benedictine monk John Lydgate.

Exclusive census analysis from the data at TheGenealogist.co.uk reveals that common Suffolk surnames include Clarke, Cook, King, Cooper, Turner, Baker, Nunn and Ward; plus Green, Read and Woods were common in 1841, as were Moore, Hammond and Last in 1911.

Leading data website TheGenealogist.co.uk has a wealth of records for Suffolk. Here is a quick run-down of what you can find (in addition to national collections):