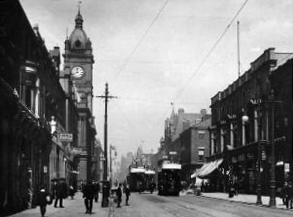 Recorded settlements at the mouth of the River Wear date to 674, when an Anglo-Saxon nobleman, Benedict Biscop, granted land by King Ecgfrith of Northumbria, founded the Wearmouth–Jarrow (St. Peter’s) monastery on the north bank of the river – an area that became known as Monkwearmouth. Biscop’s monastery was the first built of stone in Northumbria. It became a major centre of learning and knowledge in Anglo-Saxon England, and the chronicler Bede was born at Wearmouth in 673.

In the late eighth century, the Vikings raided the coast. Lands on the south side of the river were granted to the Bishop of Durham by Athelstan of England in 930; these became known as Bishopwearmouth. In 1100, Bishopwearmouth parish included a fishing village at the southern mouth of the river (now the East End) known as ‘Soender-land’.

From 1346 ships were being built at Wearmouth. In 1589, salt was made in Sunderland. Large vats of seawater were heated using coal. As the water evaporated the salt remained. This process, known as salt panning, gave its name to Bishopwearmouth Panns; the modern-day name of the area the pans occupied is Pann’s Bank, on the river bank between the city centre and the East End. As coal was required to heat the salt pans, a coal mining community began to emerge. Only poor quality coal was used in salt panning; quality coal was traded via the port, which subsequently began to grow.

During the English Civil War, because of the difficulty for colliers trying to navigate the shallow waters of the Wear, the coal was loaded onto keels (large boats) and taken downriver. The keels were manned by a close-knit group of workers known as ‘keelmen’.

Sadly Sunderland saw the worst disaster of its kind in British history when 183 children aged between three and 14 asphyxiated in the Victoria Concert Hall disaster of 16 June 1883.

The public transport network was enhanced in 1900-1919 with an electric tram system. The trams were gradually replaced by buses during the 1940s before being completely axed in 1954.

The First World War led to a notable increase in shipbuilding but also resulted in the town being targeted by a Zeppelin raid in 1916. The Monkwearmouth area was struck on 1 April 1916 and 22 lives were lost. Many citizens also served in the armed forces during this period, over 25,000 men from a population of 151,000. In WW2, Sunderland was a key target of the German Luftwaffe, who claimed the lives of 267 people in the town, caused damage or destruction to 4,000 homes, and devastated local industry.

Exclusive census analysis from data at TheGenealogist reveals that common surnames in Sunderland in the 19th century included Scott, Robson, Davison, Watson, Young, Richardson, Bell and Jackson; plus Dixon and Atkinson in 1841 and Hunter and graham in 1911. The population soared from 17,000 in 1841 to 154,000 in 1911, with the coal and shipbuilding industries dominating occupations.

Leading data website TheGenealogist.co.uk has a wealth of records for Sunderland and its historic county of County Durham. Here is a quick run-down of what you can find (in addition to national collections):