Land records are an excellent way of finding out more about our ancestors and where they lived. Celia Heritage explains, looking at tithe records in particular. 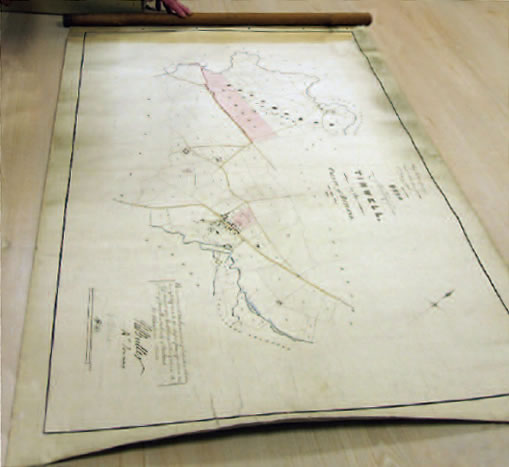 An 1846 tithe map of Tinwell, Rutland

The king of all land records are tithe records, which are uniquely available online at www.TheGenealogist.co.uk.

Tithe records were produced between 1837 and 1855. They will potentially tell you more about your ancestor and the property they owned or occupied. The records cover 75% of England and Wales and relate to all land that was subject to a tax known as a 'tithe'. One of the best things about these records is that they include not just your better-off, land-owning ancestors, but also your more humble antecedents, who may have only rented a small plot of land. Tithe records cover both urban and rural areas and will help build a picture of what life was like in your ancestor's town or parish too. There are two main types of records to look for: tithe maps and tithe apportionments.

Tithe maps are large-scale maps produced as a result of the 1836 Tithe Communication Act, which instigated a survey of all parishes where tithes were levied.

The maps will provide you with the detail lacking in Ordnance Survey maps of this era. They depict all the land in a parish, including any land not subject to the tithe, although the latter will not usually be represented in detail. The maps are divided into numbered plots, each representing a titheable plot of land and its boundaries.

Although the maps were produced by a number of different surveyors and did not follow a standard design, they routinely depict features such as houses and outbuildings, rivers, ponds, roads and trackways. They are an excellent means of finding out more about the village or town in which your ancestor lived, and what life would have been like for them.

The quality of the maps varies and, although the Tithe Commission only deemed one sixth of the maps received  to be 'first class' in terms of accuracy of scale, the 'second class' maps remain of great use to family historians too.

To fully benefit from the map you need to use it alongside the apportionment.

First, the amount of tithe owed by the parish as a whole was calculated, and then this was apportioned to each piece of land, depending on its size and state of cultivation or use. So each landowner was responsible for a percentage of what was owed by the parish as a whole. The 'tithe rent charge', as it became known, was set nationally, based on the seven-year average price of wheat barley and oats. The 'apportionment', or 'schedule', lists each plot of land and gives the following information: landowner's name, occupier's name, number of the relevant plot on the map, name or description of the house or piece of land, its state of cultivation (eg arable, pasture, house and buildings), its acreage and the amount of rent charge allocated to that plot. 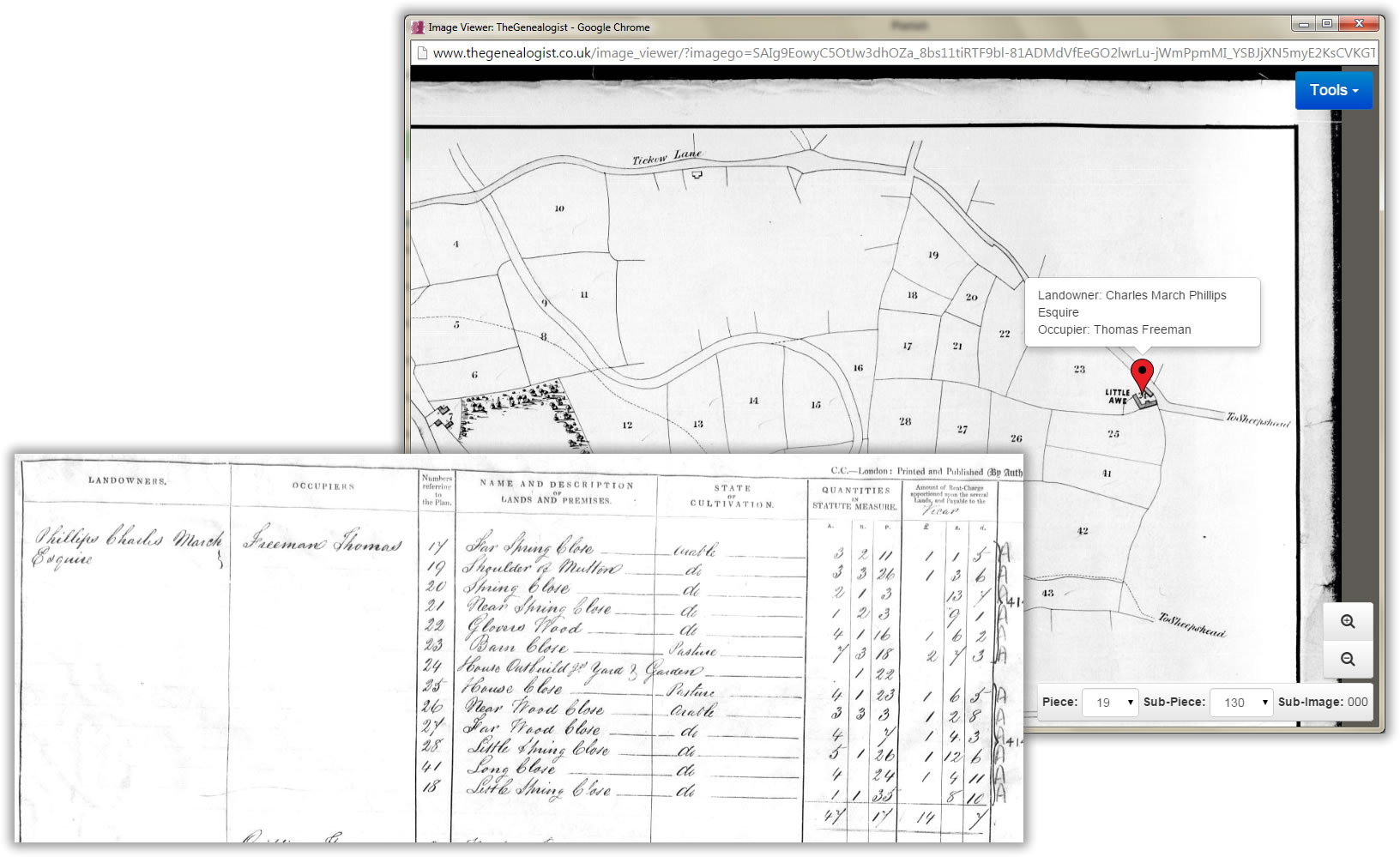 Map and apportionment extract for She(e)pshed, Leicestershire (1849), available at www.TheGenealogist.co.uk. Using the map and apportionment together we can see that plot 24 (flagged) belonged to Charles March Phillips, but was occupied by Thomas Freeman. The apportionment shows that Freeman also occupied 12 neighbouring plots, and these also belonged to Phillips. Most were arable fields, but about 12 acres were down to pasture. Plot 24 was the 'House, Outbuildings, Yard and Garden', which consisted of 1 rod and 22 perches. The map names the house as Little Awe. Freeman occupied 47 acres 17 perches of land, which were rated together at a total of £147d. The names of each piece of land are interesting in themselves, frequently indicating a topographical feature or the appearance of the plot. Some maps, as here, also record major road names and names of larger buildings.

Using TheGenealogist.co.uk, there are several ways to search tithe records. Firstly, you can search by your ancestor's name to see how much land they owned or occupied. The apportionment will give you details of their land, and then you can click to look at that plot of land on the tithe map. You can limit your search to just one parish or search over several parishes within a county. If you prefer, you can also scroll through the apportionment images page by page.

Alternatively, you can select a parish and then view the map as a whole. This is very useful if you are interested in the history of the place itself, rather than just a person. To do this, choose your county and parish, and then click 'search'.

Select any entry from the list of results and click the link to view the map. Although it will initially zoom in on that individual's plot of land, you can zoom out to view the whole map. If there is a particular piece of land you are interested in, you can then go back and insert that plot number into the search engine to see who owned it and get a description of that plot of land.

While the map will show you where your ancestor's land lay, the apportionment will tell you more about that land.

The beauty of these records is that you can use them in conjunction with Ordnance Survey maps, census returns and other sources, such as rate books, to build up a complete picture of the parish and its population. You can pinpoint who lived where, how land was being farmed, what industries there were and, of course, locate your ancestor's house. 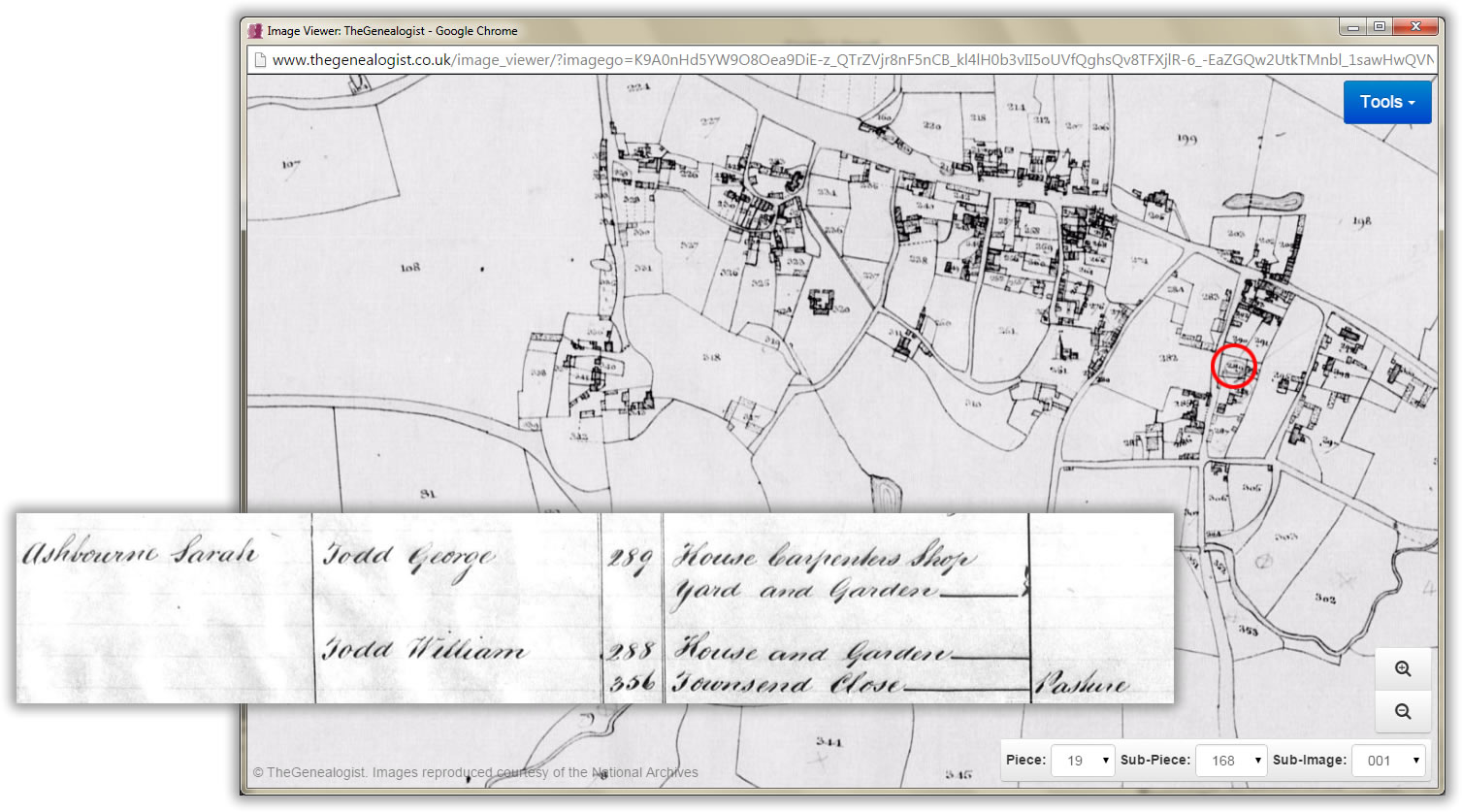 Contrast the Shepshed map and apportionment (p29) with those for Wymondham, a less rural area. Here we see many more houses and shops and, in many cases, the nature of the shop is also recorded eg George Todd ran a carpenter's shop and Vincent Hickman a glazier's shop. In this extract we can see Hickman's house and shop plus gardens, plot 289 (circled red).

What was a tithe?

A tithe was a tax (originally levied by the church) on agricultural output. The tax applied to all crops, livestock or anything considered to be 'fruits of the earth', such as milk and eggs. The tax was paid by nearly everyone who farmed land or reared any sort of livestock. The exceptions were land that was not subject to tithe for historical reasons. Originally levied at the rate of one tenth of the profit made on any product, the tithes were paid either to the local monastery or the parish church.

After the Dissolution of the Monasteries (1536-1541) monastic land was transferred into the hands of new, secular, owners – and with the land went the right to levy tithes. The new landowners could then sell on the tithe rights separately from the land if they wished. Buying the tithe rights was a good way to make money. From the 16th century onwards parishioners could have been paying tithes to either the local church or a secular tithe owner.

Tithes were traditionally collected in kind. For example, the farmers would pay so many bushels of wheat, so many lambs or so many eggs to the tithe owners, who would often build big barns in which to store the tithes. Over the years this became increasingly impractical for both the tithe owners and tithe payers and in some places local agreements were made whereby money payments were substituted for payments in kind.

As the centuries passed, tithes were felt to be unfair, especially where they were paid to secular tithe owners. In Scotland the equivalent of tithes had been abolished in 1633., and in Ireland in 1823. By the early 19th century, as a result of the Napoleonic wars and a series of poor harvests, England was in the middle of a severe economic depression. Tithe payments were among the major sources of discontent and in 1836 the government took action and passed the Tithe Commutation Act, which converted all tithes to an annual 'rent charge'.

Instigated by the government in order to determine the distribution of land ownership throughout the United Kingdom, these surveys are a valuable, but little-used source for researchers. Use them to see which of your later 19th century ancestors owned land and just how much. The surveys do not records occupiers or the exact location of land. The information was taken from the local rates and you should expect to find the occasional inaccuracy (eg the spelling of a surname), possibly caused by he mis-copying of the original information in the rate books. The surveys are available at www.TheGenealogist.co.uk

Use as a partial substitute for the lost Irish census returns of 1841 and 1851. This was a national survey of land and properties throughout Ireland, carried out between 1847 and 1865. It lists occupiers of land, as opposed to land owners. Searchable at www.TheGenealogist.co.uk, this is an excellent for tracking your ancestors and where they lived. If a property was rented, it will also record the name of owner. You may not find your ancestor if he was a tenant on a farm in what was known as a 'Rundale partnership'. This was where various plots of land were leased jointly to a group of tenants. Find out more in the March 2015 issue of Discover Your Ancestors Periodical (www.discoveryourancestors.co.uk).

If you want to focus on your ancestor's house, or how a street developed over the years, then you can also use maps such as Bacon's and Bartholomew's street maps. In 2015, TheGenealogist is releasing a series of these, which will cover major cities, dating from the 19th century.

TheGenealogist.co.uk has added original 19th century maps to its comprehensive, searchable National Tithe Records collection to help you explore the fields and houses of your ancestor's home villages and towns.

Start by going to www.TheGenealogist.co.uk then select Landowner Records from the drop down menu. We shall look for a Sir Robert Peel in Middlesex, a county that covered some of the area we would now think of as London.

In 1854 Sir Robert, twice Prime Minister of the country and creator of the modern police force, was the occupier of land that was owned by the Earl of Listowell in St Margaret’s, Westminster. By clicking on the Transcription icon we can then see the names of both the owner and the occupier, the date it was entered into the records and the plot number on the plan. The image of the apportionment reveals that it is a house: No 22 Princess Gate.

Clicking on the map icon will quickly zoom in to show the plot on the plan. You can then use the magnify buttons to move in and our to see the plots in relation to the full plan of the parish. 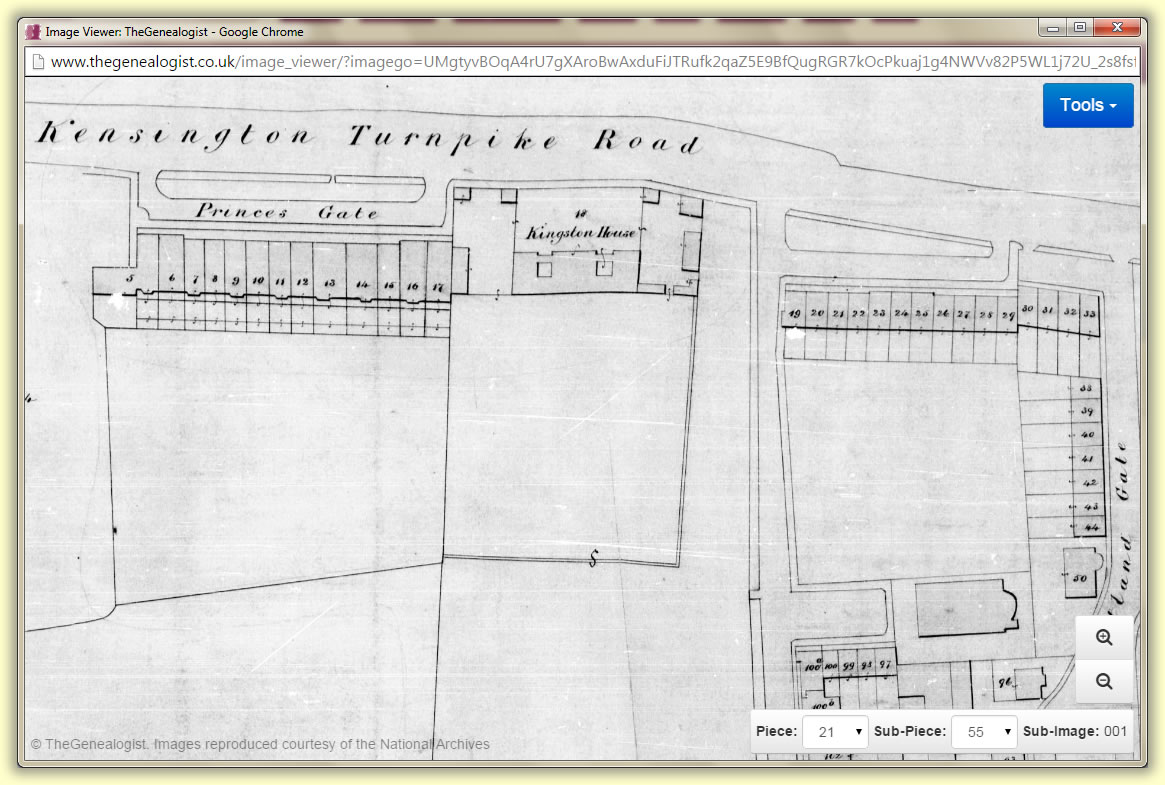 Tithes are a rich resource for family historians to find their ancestors within. The records and maps cover owners and occupiers of land from all strata of society in early Victorian times.