The actress, the dean and the prince

Recently, I came across a slightly foxed volume on the life and times of Lillie Langtry, the famous actress from the late Victorian period. Famed for her beauty, she was a some-time mistress of the Prince of Wales and various others in London’s high society. I can remember learning something of her life when I was a schoolboy. My history teacher would habitually spend his lunchtimes in a hostelry named after the Jersey Lillie, presumably in preparation for the taking our ‘double history’ lessons! Wanting to remind myself about the famous Victorian lady, I decided to do a bit of research to see what I could turn up about her and her family, whom I vaguely remembered were embroiled in controversy. Lillie and her family feature in many of the databases available on TheGenealogist.co.uk and so it was the ideal place for me to begin my research. Lillie died in Monaco, but had been buried in the island of her birth, so I began looking in the headstone collection for the cemeteries in Jersey which had been photographed and the details transcribed.

Logging into TheGenealogist I decided to look for Lillie Langtry. Immediately one result from St Saviour’s cemetery, Jersey, was returned. Clicking the link, to see the image, I was rewarded by a particularly striking piece of monumental art that stands out from the graves that surround it - a white marble bust on a granite plinth. She was born as Emilie Charlotte Le Breton, the only daughter of the Rev William Corbet Le Breton and his wife Emilie Davis (née Martin), who was also known for her beauty. Unusually, for a clergyman, her father had eloped with her mother first to Gretna Green in Scotland and then in 1842 they regularised the union by marrying at Chelsea in London. This may explain why we see, in the GRO marriage records on TheGenealogist, that the bride has the same surname as her husband. Lillie was the only girl out of the seven children that her parents had, born in the rectory of St Saviour’s in Jersey. Her father was the rector and also held the respected post of Dean of Jersey. In spite of his position in the Church, the Rev Le Breton had a reputation as a philanderer, having several extramarital affairs. Eventually his wife was to leave him in 1880 and the Rev Le Breton then departed the island for London. Using the 1881 census collection on TheGenealogist we are able to find William as a lodger in the St Pancras area of London, though he has still given his occupation as Dean of Jersey and the enumerator has added ‘Clergyman’. The grave in Jersey is a family plot and behind Lillie’s monument is one for other members of her family. By reading the inscription for her father we can see that he remained, at least in title, the Dean of Jersey right up to his death in 1888. By this time, however, he was serving in the poor London parish of Kennington. We can find his death recorded in Lambeth, but can also see from the image on the Headstone collection that he was buried in his native island. 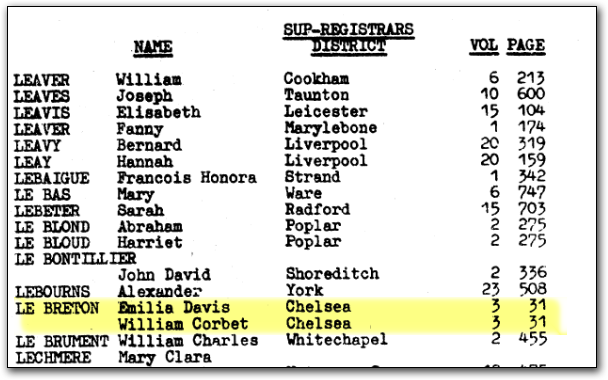 The official marriage of Lillie’s parents in 1842 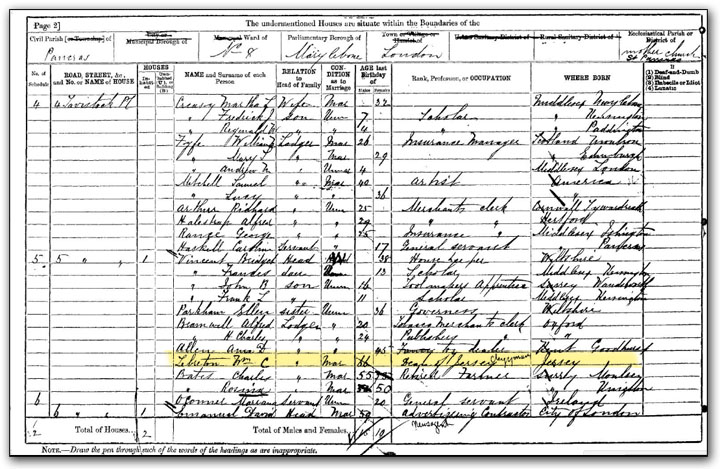 William Le Breton lodging in London, as shown in the 1881 census 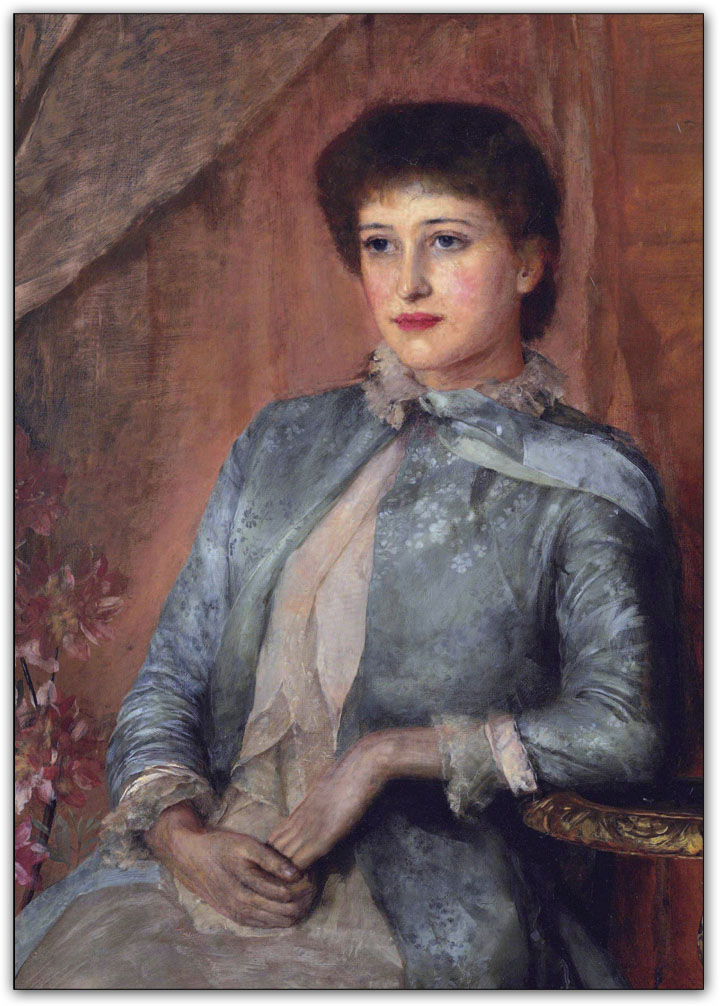 Because William Le Breton was a clergyman a check of the Occupational records on TheGenealogist finds him in the Clergy List under the alphabetical section. A second entry found him as the Dean of one of only five Peculiars of the Church of England. In 1874, when Lillie was 20, she married a widower and Irish gentleman of independent means. Edward Langtry had a beautiful yacht called The Red Gauntlet and Lillie is reputed to have said later that she fell in love with the yacht and married the owner. From the census records for 1871 we can trace Edward and his first wife Jane Frances to a house in a lane not far away from St Saviour’s church and its rectory. The Langtrys are listed as visitors and Antrim is the place of both their births. Langtry’s wife died while they were visiting the island as there is also an image in the Headstone collection for the grave of Jane in one of the municipal cemeteries on the north side of the island’s capital, St Helier. This reveals that she died on 13 October 1871, aged just 21.

Edward was the grandson of George Langtry, a Belfast shipowner. After marrying Lillie, however, Edward’s fortunes changed. He was forced to sell the yacht which Lillie had been so enamoured of. It is said that Edward’s family disapproved of Lillie and perhaps this explains their lack of funds. Edward was a gentleman relying on income from his Irish land holdings. Yet using the Landowner records on TheGenealogist and searching for him within the Irish records for Antrim in 1876, there is no sign of him. There are, however, two other Langtrys recorded and so if he was in receipt of allowances from one or other of these and they wished to restrict how much Edward could spend on Lillie, then this may explain their impoverished situation. 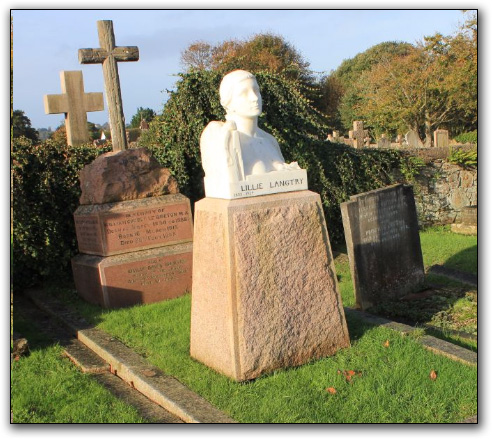 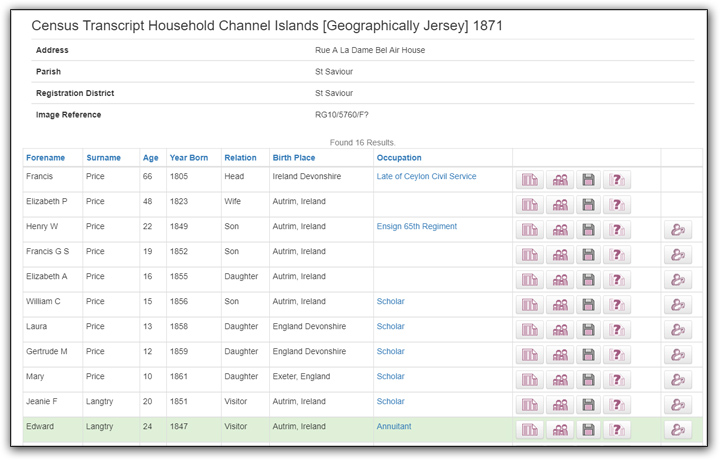 Edward Langtry’s listing in the 1871 census

On their marriage Lillie and Edward had moved from the Channel Islands to Southampton, later moving on to Belgravia in London after Lillie’s doctor persuaded her husband that it would aid her recovery from a serious illness. The Langtry’s were invited to a high society reception hosted by Lord Ranelagh, and Lillie was immediately approached by several artists present at the reception. The sketches taken of Lillie from the reception became extremely popular on postcards, outselling all other society and stage women. Lillie also caught the eye of the Prince of Wales, becoming his ‘semi-official’ mistress. Checking the extensive Image Archive on TheGenealogist some images of Lillie are returned, including one of her in character as Mrs Hardcastle in the play She Stoops to Conquer.

By returning to the site’s large collection of Occupational records – a useful tool for researchers to use because of the lists of Actors, Clergy, Directors, Law, Medical, Pilots and more – the entry in Who’s Who in the Theatre reveals that the part of Mrs Hardcastle was actually Lillie’s first appearance on the stage and that took place at the Haymarket Theatre. There’s even more about which characters she took in other plays and dates of her tours to America.

To build more of Lillie’s story, TheGenealogist's Newspaper and Magazines collection reveals adverts for Pears soap in which she endorsed the product and a scandal that engulfed the Langtrys in 1879. In a report in the Illustrated London News on 1 November 1879, Adolphus Rosenberg was sentenced to two years in prison. As the publisher of Town Talk he had libelled the Langtrys by publishing rumours that Lillie’s husband would divorce her and cites, among others, the Prince of Wales as co-respondent. Rosenberg also wrote about Mrs Cornwallis- West which resulted in her husband suing Rosenberg for libel. At this point, the Prince of Wales also instructed his solicitor, George Lewis, to sue. Rosenburg pleaded guilty to both of the charges brought against him and was sentenced to two years in prison. With the number and varied data collections to use on TheGenealogist, I have now added much more depth to my research into Lillie Langtry’s family. There is still more to be found within the records, such as her second marriage to the much younger Hugo Gerald de Bathe, who inherited a baronetcy on his father’s death, making Lillie ‘Lady de Bathe’, but that is another story. 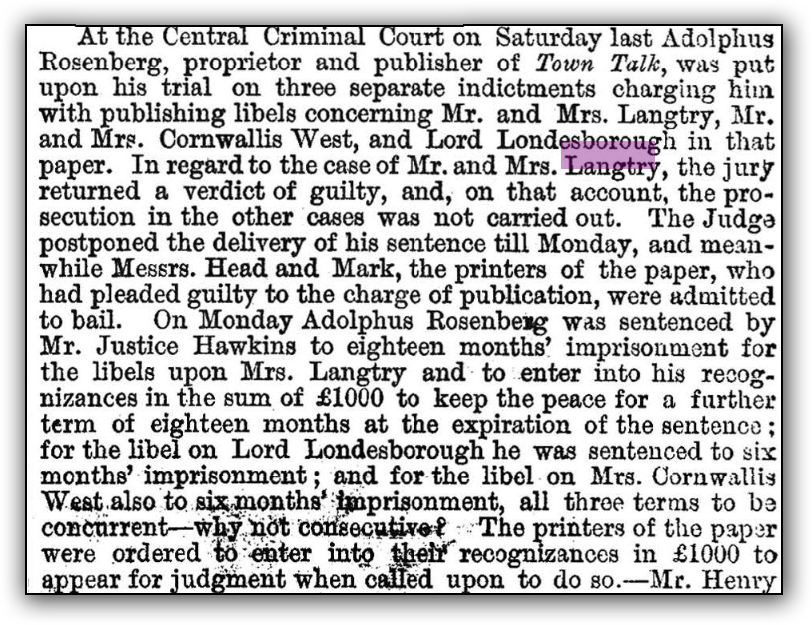