Nick Thorne looks at the respectable lawyer and his murderous niece, who laced sweets with strychnine, and investigates the record collections on TheGenealogist that help to shed light on many aspects of their lives 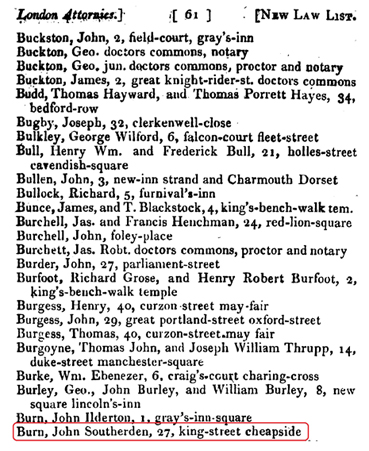 The BMD registers on TheGenealogist are invaluable for tracing Nonconformists' lives 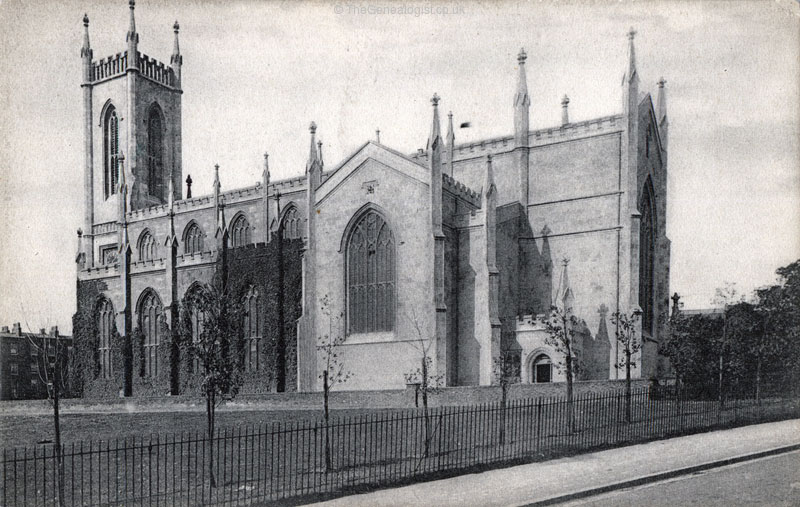 John Southerden Burn was an English solicitor and antiquary who, from a family historian’s point of view, is intriguing for having made a study of one of the major backbones of our pursuit - that is the Parish Registers. His niece, however, would be unmasked as a murderess.

In 1829 Burn first released his research on Parish Registers when he published his major work the Registrum Ecclesiæ Parochialis, a history of parish registers in England with observations on those in other countries. As a lawyer he can be found in the list of London Attornies in the New Law List for 1824 within the Occupational records on TheGenealogist. This would indicate that Burn practised in the common law courts. After 1873 the office of "attorney" was to disappear to be replaced by "Solicitor of the Supreme Court of England and Wales".

By searching for Burn’s birth we are able to discover that he, ironically, did not appear in the Parish Registers. This was because he had been baptised into a nonconformist denomination and not into the Established Church. By using TheGenealogist, an image of his christening in the Register of Births and Baptisms at Week Street Independent Chapel in Maidstone, Kent from from 1783 and 1817 can be seen in the BMD registers Baptism records for July 1798.

This respectable gentleman’s sister, however, had a daughter called Christiana. It was this woman who would, in the early 1870s, become somewhat notorious when her identity as “The Chocolate Cream Killer” was finally revealed!

Miss Christiana Edmunds, had been born on 3 October 1828 into a privileged family in Margate, Kent. Christiana was the eldest child of William Edmunds and his wife Ann Christiana Edmunds neé Burn. Her father, William, was an architect and the designer the Holy Trinity Church in Margate - a picture of which can be found in a search of the Image Archives on TheGenealogist. Her mother was the sister of John Southerden Burn, the solicitor whom we have already met above, and the daughter of a Royal Marines Captain.

Christiana was privately educated, as we can discover by looking for her in the 1841 census where she is found as a 13 year old boarder in Chapel Place, Ramsgate. In her early twenties, however, she was diagnosed by her doctor as having hysteria. Her father is believed to have suffered from insanity before his early death. Christiana and her widowed mother can then be found in the 1861 census on TheGenealogist living in Canterbury, Kent. From this record we can see that her mother is recorded as a “Proprietor of houses” and Christiana as “Independent”. By 1869 the mother and daughter had moved on to Brighton and this was where, perhaps bored with her life as a spinster of independent means, Christiana began a course of events that would lead to her being convicted and the court passing the death sentence on her. This capital punishment was, however, eventually commuted to life imprisonment and so she would live out her days in The Asylum for Criminal Lunatics, Broadmoor, a picture of which can be found in The Illustrated London News of August 24 1867 on TheGenealogist.

Christiana had grown up in a household which had seen more than its fair share of mental illness. Apart from her father, her brother had died at the Earlsfield Asylum for Idiots in London, and one of her sisters died, allegedly, by her own hand. A check of the census records for both 1881 and 1891 finds Christiana Edmunds listed by name as an inmate in Broadmoor -  but by 1901 some form of anonymity was introduced into the census records when only initials were used for enumerating the inmates.

To find out what chain of events had led to this incarceration, we can turn to the Newspaper and Magazine collections on TheGenealogist and find several reports in The Illustrated London News. In the late 1860s, Christiana Edmunds had become enamoured with the local doctor, Charles Beard. The nature of their relationship remains a source of controversy but, in the September of 1870, Christiana poisoned the Doctor’s wife by giving her a chocolate cream containing a toxic substance. The following day, Mrs Beard became violently ill, but then recovered. Dr Beard had his suspicions about Christiana, but did not act on them as he lacked the proof. Meanwhile Christiana continued to write frequent letters 'in such an affectionate strain' to the Doctor that she had to be asked to desist by him.

The finger of suspicion

The lovestruck Christiana now realised that she had to deflect the finger of suspicion that was plainly pointing her way. In 1871 she began acquiring chocolate creams from John Maynard, her local confectioner, which she then laced with strychnine and returned to the vendor in exchange for other items. The hapless Maynard then sold the returned chocolates to the public, not being aware that they had been doctored so dangerously by Christiana. To begin with she obtained her strychnine from a local chemist named Isaac Garrett. She told him that she required the poison to kill stray cats - a use that the chemist accepted and so he supplied her with the drug. Not wishing to be identified with further purchases of the toxic substance she later turned to paying young boys to buy the poison for her. By this time, several people in Brighton had now become sick after eating the chocolates - but no one had connected the illnesses with the chocolates. Then, in June 1871, her plan went wrong. Instead of just making a lot of people sick a 4-year-old Sidney Albert Barker, who was on holiday with his family, died as a result of eating chocolates from Maynard's shop.

At first the Brighton coroner ruled that the little boy’s death was accidental, but later on it was confirmed that it was poisoning. Christiana Edmunds had increased her campaign, and began sending parcels of chocolates to prominent persons, including Mrs. Beard, who became violently ill. She also sent herself a package, claiming that she too was a victim of the poisoner. By now, the Brighton police had made the connection of the increasing numbers of sick people to the parcels of sweets and cake. In the hope of deflecting suspicion on to the shopkeeper, John Maynard, from whom some victims had purchased their chocolates Christiana wrote to the father of the little boy that had died claiming that there was a general feeling of indignation in the town regarding the outcome of the inquest and urging him to prosecute the confectioner. The Illustrated London News of September 16 1871 reported that Mr Barker received three anonymous letters. When later, however, an expert examined the handwriting used on the three messages and compared it to letters admitted to be in the hand of Christiana Edmunds, he concluded that all had been written by her.

Dr. Beard eventually informed the police of his suspicions and this resulted in Christina Edmunds being arrested, and charged with the attempted murder of Mrs. Beard, and also the murder of Sidney Barker. After committal hearings, it was decided to move the case from Lewes to the Old Bailey, and Edmunds' trial began in January 1872. On being found guilty she was given the death sentence, but this was commuted to life inside Broadmoor. She died there in 1907.

With the help of the many record sets on TheGenealogist we have been able to trace the story of the respectable solicitor from Kent and his unstable niece who would become known as 'The Chocolate Cream Killer'.

Broadmoor, as shown in the Illustrated London News, where the Chocolate Cream Killer would spend the rest of her days