The Fortunes of war 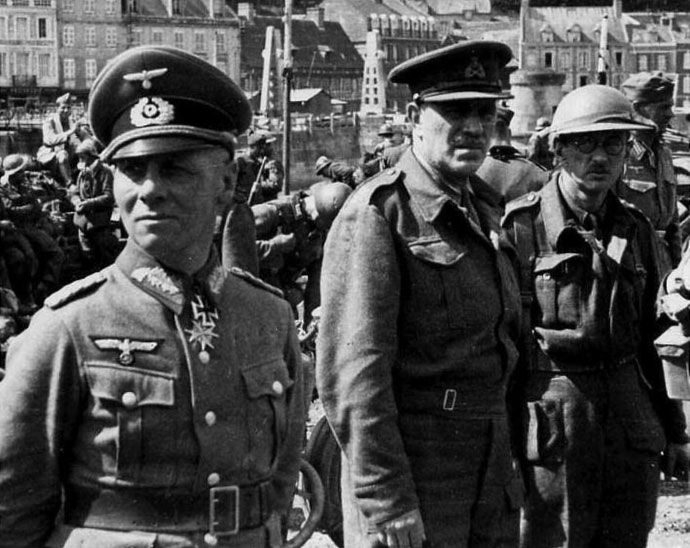 The capture of Major-General Victor Fortune (centre) by Rommel (left)

Recently I was doing some research on soldiers, sailors and airmen within the newly published World War Two prisoner of war records on TheGenealogist.co.uk and I couldn’t help but notice how so many of the British and Imperial prisoners of war held by the Germans were mostly young men at the time of their captivity. Also quite evident was the fact that the majority of the officers held were not of a high rank. Not a surprise, I thought, as the generals were probably all safe at home. I stopped in my tracks, however, when I came across a record for a British major-general held in one of the camps for officers in Germany. This surprise discovery made me wonder what I could find about this particular officer’s story.

Victor Morven Fortune was a British Army officer who had been born in Aberdeenshire in 1883 – the son of John (Jack) Fortune of Bengairn, Castle Douglas in Kirkcudbrightshire. His father, in spite of owning the Scottish Bengairn estate in present day Dumfries and Galloway and sporting a coat of arms granted only in 1903, had made his wealth in India. Throughout the 17th and 18th centuries the Fortunes had been tenant farmers in East Fife, but by the 19th century they were prosperous enough to own their own land. The Major-General’s father, Jack, had been to St Andrews University and then became an East India merchant in the subcontinent. This was where he made his money before his return to Scotland.

TheGenealogist has a collection of Peerage, Gentry & Royalty records that document the ancestry of titled and landed families in the United Kingdom and Ireland. Searching for Victor Morven Fortune I was able to find an entry for him in Armorial Families that revealed a great deal of useful genealogical information about the family, and also included his wife’s lineage plus gave the name of his son as John Bruce Forrester Fortune. 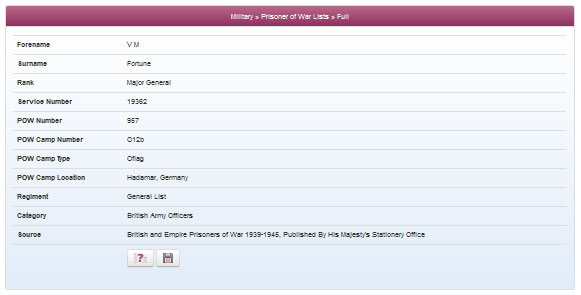 In 1903, and at the age of 20, Victor Fortune had been commissioned into the famous Scottish regiment, the Black Watch (Royal Highlanders), as a Second Lieutenant. A search of TheGenealogist military records enabled me to find him in several Army Lists charting his career as he rose in rank through the British Army. Fortune served in World War One as the Commanding Officer of the 1st Battalion of the Black Watch, from 1916, and then he became the Commander of 46th Brigade from 1918.

Further research within TheGenealogist’s records rewarded me with details of Major-General Fortune in Kelly’s Handbook to the Titled Landed and Official Classes 1942. This gave me a timeline for his military service and it also revealed that the young Victor Fortune was sent from Scotland to school in the South of England. Using this information I was able to then find the 17-year-old school pupil resident, on census night 1901, at Winchester College’s Culver House. A search of the school’s website revealed to me that Fortune was at Winchester between 1897 and 1901.

Records of the Fortunes from Armorial Families Volume 1 on TheGenealogist 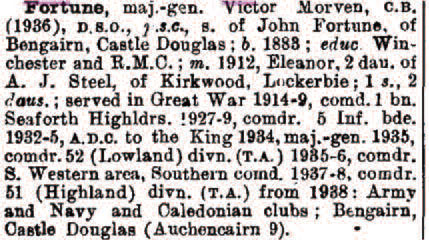 With the information printed in Kelly’s Handbook to the Titled Landed and Official Classes 1942, I then turned to the comprehensive military records collection on TheGenealogist. It was here that I was immediately able to see that Fortune had been Mentioned in Dispatches several times beginning in 1915 at the rank of Captain. There were two more MiD records for him in 1916, when Fortune had been a Captain and then Brevet Major. There was yet another record, in 1917, when he was a Brevet Major (Acting Lieutenant-Colonel); and again in 1918 at the ranks of Captain and Brevet Major (Temporary Brigadier-General). TheGenealogist Medal record collection was also able to reveal to me that in June 1916 he was awarded the Distinguished Service Order.

In 1927 Victor Fortune was then given the command of the 1st Battalion, Seaforth Highlanders and three years later, in 1930, he became the Commanding Officer of the 5th Infantry Brigade. By 1935 he had risen to become General Officer Commanding 52nd (Lowland) Infantry Division and then General Officer Commanding the 51st (Highland) Infantry Division in 1937. It was also in 1935 that this senior officer now attained the heady rank of Major-General, as was revealed when I searched the 1940 Army List on TheGenealogist.

With the start of World War Two Major-General Fortune was now fighting with the British Expeditionary Force as a part of the United Kingdom’s commitment to the defence of France. In January 1940 The Highlanders, under his command, were dispatched to France. After the initial operations the Battle of France took a disastrous turn which saw large numbers of Belgian, British, and French troops cut off and surrounded by the German army. Operation Dynamo, between the 27 May and 4 June 1940, managed to evacuate 338,226 soldiers from Dunkirk in a hastily assembled fleet of over 800 boats – but not the Major-General or the majority of his Highlanders.

The 51st Division had become isolated, forming a defensive perimeter around Saint-Valery-en-Caux, and so they could not join the general evacuation from Dunkirk. The Scots troops supplies of ammunition had been exhausted and so, on the 12th June 1940, Major-General Fortune was forced to surrender the greater part of the Highland Division to the enemy. Just one brigade had earlier withdrawn to Le Havre and so it was only these men that managed to avoid capture. This is how Major-General Fortune came to spend the rest of the conflict as a prisoner of war and this is why his record now appears in TheGenealogist’s World War II PoW records.

As the most senior British officer in captivity in Germany he negotiated with the German authorities to improve the conditions of all the men under his command. Some time in 1942 or early in 1943 the Royal Caledonian Curling Club, back in Scotland, received a request from General Fortune for curling stones to be sent to the camp in Schloss Spangenberg. Through the good offices of the British Consul in Switzerland the polished granite stones were sent to the camp and the Scots officers then flooded the dry moat of the 13th century castle, that made up part of their PoW camp. When it froze they could now go curling on the moat. According to the rules of war the officer prisoners were not required to work for their German captors. Rather than this being seen as positive, it was actually a negative factor for many of the PoWs as boredom set in.

Fortune himself suffered a stroke in 1944 while still in captivity, but he steadfastly refused the offer of repatriation telling the Germans that he had brought his men out and that he would go back with them. Victor Morven Fortune was finally liberated in April 1945 and knighted shortly after in recognition of the valuable services he had provided in the interests of the British prisoners of war in Germany.

Through a combination of military, census and gentry records revealed by searching TheGenealogist, we have discovered a career officer who served with distinction in the World War One, being mentioned in dispatches several times, awarded the DSO and rewarded by rising rank.

In the World War Two, however, he was unlucky to be captured with his men in the Battle of France, thus becoming a prisoner of war for five years. Even though his health had been affected by his captivity, contributing to his death in 1949, he refused to abandon his men and remained with them to the end. 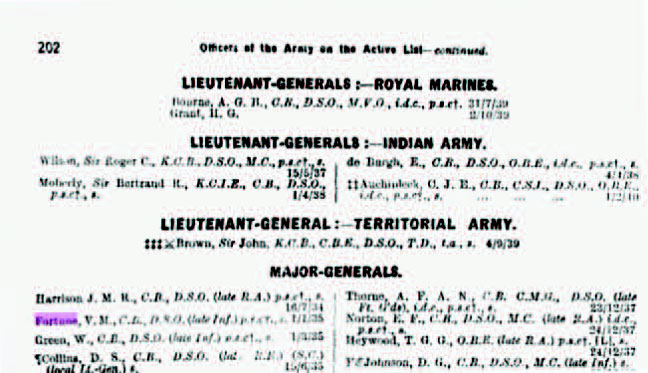 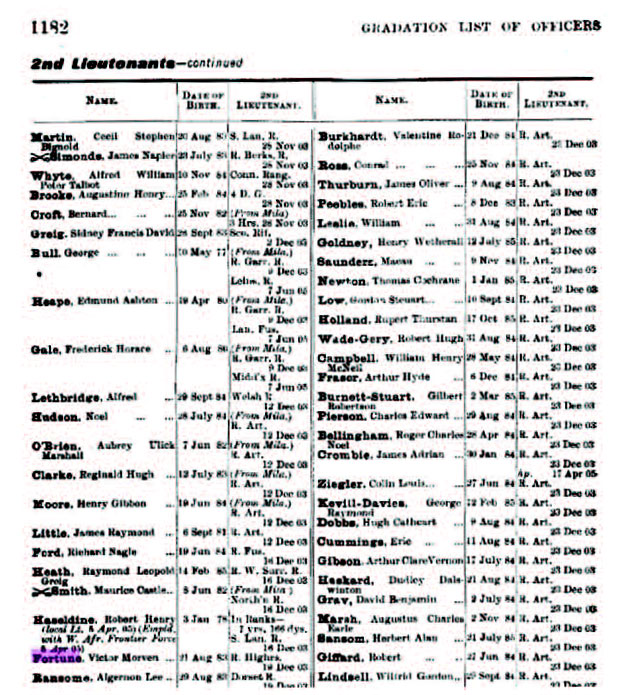 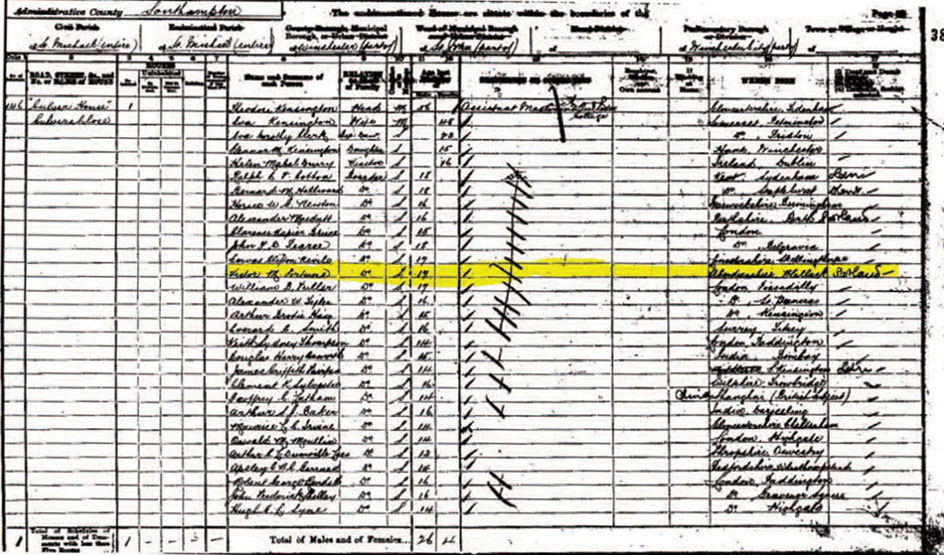 Fortune at school, in the 1901 census at TheGenealogist 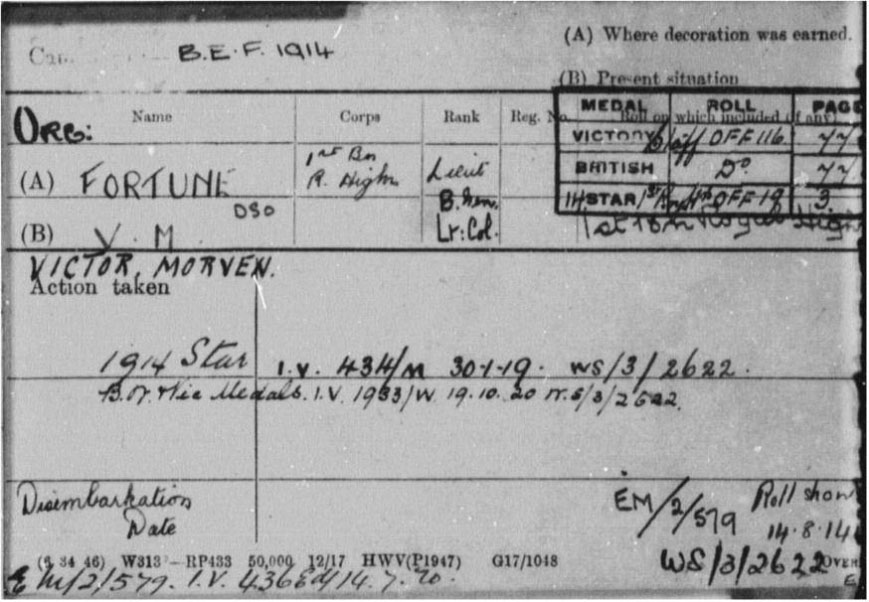