The Genealogist website www.thegenealogist.co.uk is run by S&N Genealogy and provides some interesting new ways in which to research your family history. David Frost has been having a look and here is what he found...

The Genealogist is a subscription website and you can buy credits that can either be used for searching the databases or for viewing documents of interest. Buying a small number of credits on a pay-as-you-go basis is fine if you only need to do a little research but if there's a lot on your mind you may find it cheaper and easier to take out an annual or monthly subscription. There's a special package available for professional genealogists. Some searches are free and if you've viewed an image within the previous 30 days you can have another look at no cost.

Census information is available via indexes and transcripts. S&N have invested a great deal of effort over the years into making census data available and this is based on the information in their CD range. After you've done the search there's the option of viewing the original document. A particularly useful feature is the ability to sort the transcript by column so as, for example, to get everyone at the same address in adjoining lines or to group by occupation.

Transcripts of parish records are available. These are grouped by county then subdivided into parish. At this stage only a small number of records are available but they are being added to on a regular basis. There are street directories which come as acrobat files. The names of the directories will be familiar but the ability to search a whole county for a particular name is a spectacular step forward, especially as you can search up to three directories in one go. London is particularly well covered for the last half of the 19th century.

If your ancestors were officers in the Army or Royal Navy, you'll be pleased to find that selected Army and Navy lists are available. A search will reveal the first occurence of a name and you then need to use the Acrobat search tool to see if it appears again in the same volume. Typically, you would expect a name to appear at least twice.

Also under the heading of specialist records come such documents as lists of landowners and crew lists from the census. Finally, there's quite a wide range of wills, mostly from the 18th century of earlier, including Irish wills.

If you're interested in the geographical distribution of your family name, just enter it into the surname mapping option and see what comes up. Maps are available for all census years except 1881 and 1901 and for BMDs from 1880. Although to some extent this is a fun tool it can be especially useful if you are looking for a rare surname and have no idea in which parts of the country your ancestors lived.

When you're doing a search it's worth remembering the underlying philosophy of the site. The default is to go for an exact match which means that only what you have entered will be returned, unlike some other sites which will give near misses as well. If you want to be able to refind the search by, for example, using wild cards, setting geographical limits, entering occupation etc, you can use the advanced search function. This will widen or limit the data returned according to the choices you make. Don't forget that all transcripts are prone to error.

The default when you log on is the Research page from which you can access all the features offered by the site. Here you'll find the BMD (birth, marriage and death) indexes 1837-2005, which of course are those of the GRO (General Register Office) and via which you can order the documents you need. The clever thing here is the Smart Search, which works on BMD records from 1984 when the GRO started to computerise. For example, if you've found somebody's death, Smart Search will, by calculating their age, look back to the birth indexes in which they might appear. For married women you can enter the maiden name. With marriages you can switch between the husband and wife which provides you with a little more information than just one entry could. 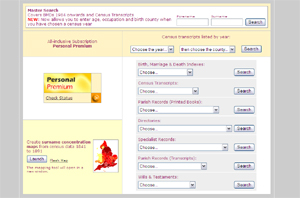 1. All searches start from the Research View screen. 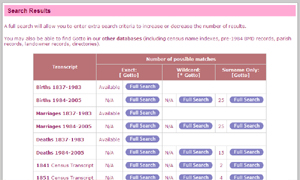 2. A BMD search for the surname GOTTO. This is an uncommon name so we should easily be able to work through all instances. 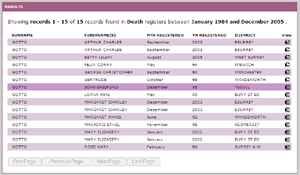 3. Fifteen deaths, 12 if you exclude duplicates, are shown for the period 1984-2005. That for John Gaisford Gotto is highlighted. 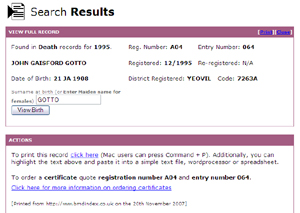 4. The detailed entry shows, among other things, the month the death was registered and the date of birth. 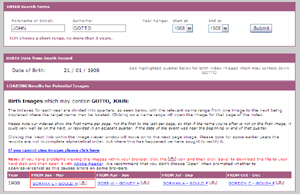 5. Clicking on the View Birth button brings up the birth records which are likely to include those for John Gotto, with the most probably highlighted. 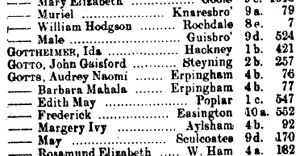 1. A census search for Samuel Stockdale using the Quick Search facility. He was chosen because the name has common variant spellings of Stogdale and Staydale in transcriptions of the 1871 census and I wanted to see how The Genealogist coped with it. 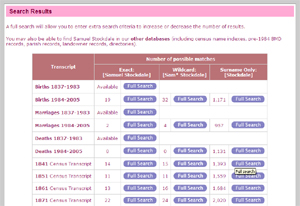 2. There are 22 matching entries for 1871. Note that wild card and surname only options are also shown. 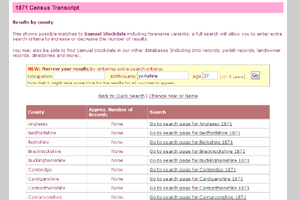 3. Samuel's occupation varies from census to census. He was born in WRY [West Riding of Yorkshire] and was about 37 at the time of the census. The search is refined using this information. 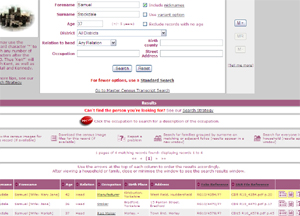 4. The first attempt does not reveal him because although born in Yorkshire this, it turns out, is not shown in the transcript. Removing the county puts Samuel in the frame. He was a rag manufacturer. 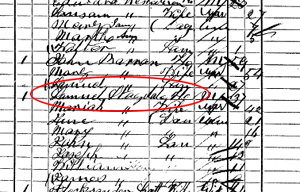 5. Here is the census image showing Samuel and his family. The enumerator was rather idle in not showing the county of birth. No doubt as a local man he thought the whole world knew where Morley was! In fact the search has been quite clever in finding Samuel, as on close inspection his name looks much more like Staydale than Stockdale.

A good range of original images are available for all census years and counties. Check out www.TheGenealogist.co.uk for coverage details.