The first British pilots' certificates were awarded just over a century ago - here we pay tribute to the pioneers of aviation and reveal a new way to learn more about them online.

One of the first 10 people to be granted a flying certificate from the Royal Aero Club was Samuel F Cody. The new collection of pilots' records at www.thegenealogist.co.uk reveals a wealth of details about his life. 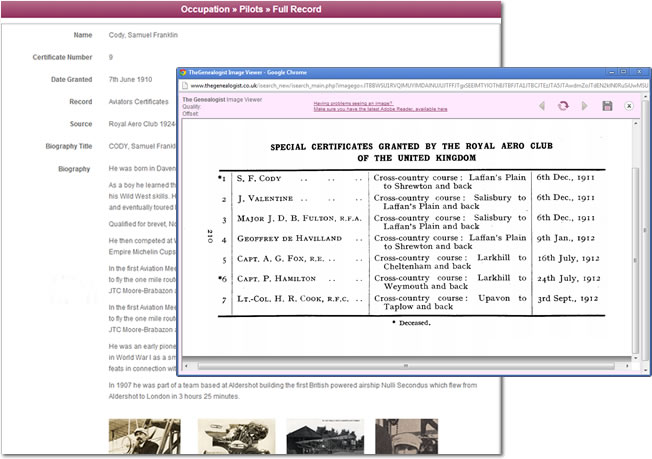 The records can be found under the Occupations section of the main search page - choose the Pilots option. We can now look up Cody by simply putting in his surname.

The results show his certificate number and the type of plane he flew, as well as the date when the certificate was granted. In this particular case there is also a 'Deceased by' field which could help to track down death records.

The original Royal Aero Club record (right) is available by clicking on the icon. Also, in some cases, as here, more information is available: TheGenealogist has linked biographies of the early aviators from contemporary accounts where possible, including books and newspapers. Sometimes there are even photographs available.

Cody's biography tells of his upbringing in Iowa, USA, where he learned the cowboy skills which led to him touring England with his Wild West act, trading on the name of Buffalo Bill Cody (no relation). He then became an early pioneer of manned flight, most famous for his work on the Cody War-Kites that were used in World War One as a smaller alternative to balloons for artillery spotting.

He was also the first man to conduct a powered flight in Britain on 16 October 1908. He died in a plane accident in August 1913.