The Hidden Treasures of Gravestones

I get quite excited when I see a churchyard or cemetery. To me it is a fabulous repository of genealogical information, all of which is just waiting to be revealed.

I’d like to share with you some of the gems of interesting information that I discovered from taking part in TheGenealogist.co.uk’s Headstone Project. It has really opened up my eyes to what can be learnt from these sometimes fascinating memorials. Armed with a camera, a bottle of water and a soft paint brush (I’ll explain about these later), I set off to record as much as was still legible on stones.

Initially I was really surprised to find that generations of locals, in the burial sites that I was photographing, chose the names for their offspring from a quite small pool of Christian names. For example there were countless Mary Anns, hundreds of Johns, Charles, Philips, Elizabeths and derivatives such as Elizas. 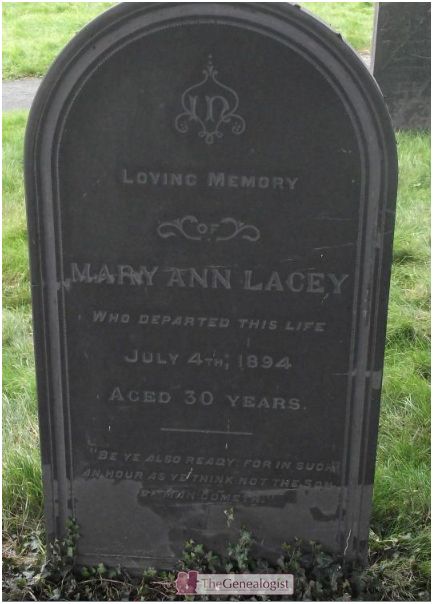 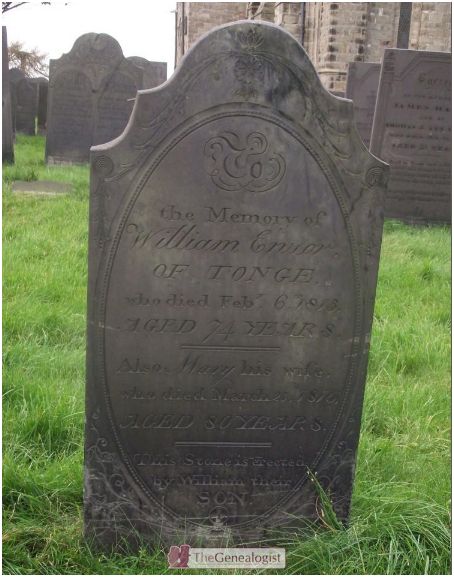 This grave at St Mary and St Hardulph, Breedon on the Hill, Leicestershire shows how gravestones can yield useful dates for family historians

With infant morality being high, in past times, there is sometimes a sad list of young lives recorded on some of these gravestones. Families often named a child after a previous dead sibling, so that many examples of offspring all bearing the same name can appear on a single stone. A case of the parent’s hope naturally triumphing over experience, like the example pictured below from St. Martin’s Churchyard in Jersey, where one John after another was born and buried to the same parents.

The value to us from a memorial such as this is that, with the children’s dates of birth and deaths carved into the stones, it can help us work out which child is which. There may be cases of a son called John, born to certain parents that the researcher has already discovered in the church registers. But with several baptisms of other sons called John to the same parents, which was the one that survived into adulthood? The headstones can help us here to identify each of the children.

Before I pulled on my Wellington boots and started tramping over often rough ground of the old burial grounds in my area, I had the wrong idea that all our ancestors had very short lives. It is true, as we have seen above, that many children didn’t live long. But by the number of octogenarians recorded on these stones, however, I soon began to realise that if an ancestor survived their childhood then they had a good chance of living to old age. Certainly this is the case in the rural areas of the country, if not so in the industrial cities.

On the subject of ages, sometimes a stone can reveal more about a person’s birth date than they had chosen in life to reveal to the census enumerator. You may discover that the wife, who declared she was the same age as her husband, or maybe a diplomatic couple of years younger on the census, turns out to be older than him by several years. The stonemason’s inscription reveals the truth for us to see years after it no longer matters to the deceased.

One example is William Ensor of Tonge in Leicestershire who died in 1813 aged 74 and so we can calculate he was born in 1739. Mary, his wife, died in 1816 aged 80 and so she was born in 1736, making her just a little bit his senior by three years. Not a big deal in this case, though I have seen some much greater age differences on stones elsewhere in my travels. 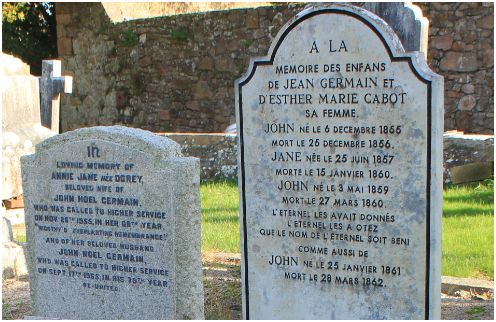 The brothers John Germain on a headstone in St Martin's Churchyard, Jersey

Many people passed away overseas

One of the useful features of some gravestones that I captured was that they didn’t just give names and dates but they also recorded the place of abode of the deceased. Unfortunately in my area this was not as common an occurrence as it is in other places, but it can be really useful to read that John Smith died at his residence Highlands House in Anytown and then that his wife died some time later at Church Lane Cottage in Anytown. Perhaps the widow was forced to downsize or leave the house that had now been inherited by her son’s family? This insight can raise questions to look into, while also giving the researcher some valuable data to go on and locate the homes in maps, census records and the like. 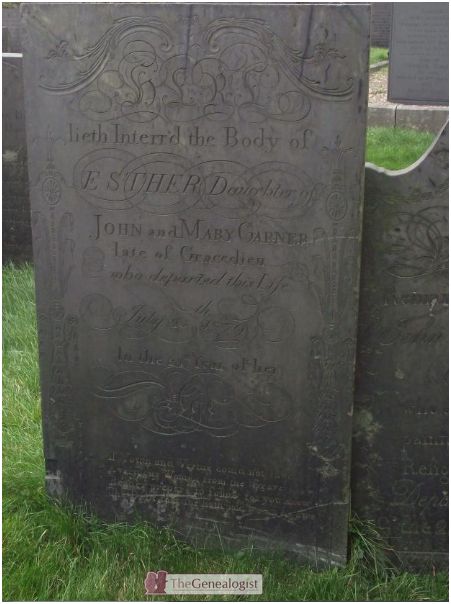 Many people assume that their ancestors didn’t travel very far, after all they didn’t have access to motorways, planes and so on. What is often forgotten is that our forebears did sail ships all over the world. In the Channel Island of Jersey, I was fascinated to see the likes of towns in Newfoundland, the USA, Brazil, Mexico, India, Australia and New Zealand regularly come up as places where people had passed away, often in relation to sailor brothers or fathers commemorated on family tombstones.

Some people were remembered on the graves of their close relatives, even when they were buried in other burial grounds in other parishes or towns. This can give researchers a valuable clue as to where the family may have moved from. There were also cases I saw of a spouse’s memorial being added to headstones of their husband or wife’s graves when they had died years later in another part of the country. In these instances, a mention of a place of internment can put the researcher onto the trail of where ancestors may have moved to in their later life. Perhaps the cause was to be near children, thus opening up another area to investigate.

On the contrary, some ancestors didn’t seem to travel very far at all. I was amused to find that in at least one case that the wife’s maiden name was the same as their married name. I am assuming that they were at least first cousins, or maybe distant branches of the same family and not that the pool of eligible candidates for marriage was so restricted in the local area at the time!

When a man lost a young wife, possibly in childbirth, I noticed a number of times example where the second wife had the same maiden name as the first. The reason for this could be a case of the man marrying the sister-in-law, who had stepped in to look after her dead sister’s children.

As most genealogists are interested in the pedigree of an ancestor, one of the gems I discovered on some headstones was where the person remembered had an explanatory line below their name giving their parents’ names as well. An example taken from St. Mary and St. Hardulph Churchyard, Breedon on the Hill, Leicestershire is shown below: Esther the daughter of John & Mary Garner, late of Gracedieu. 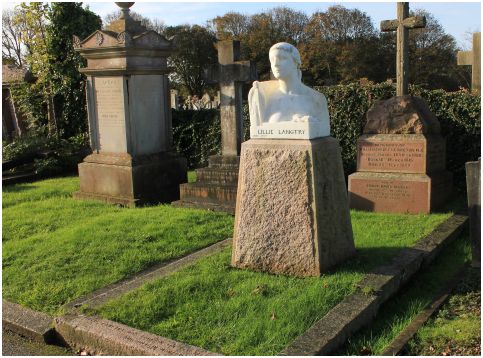 Other clues include people whose surname doesn’t match the others on the headstone, but indicates that they were the grandson of the person named above, making it possible perhaps to chase down the marriage of a daughter from this hint writ in stone.

Military ranks and awards featured strongly in the cemeteries that I photographed. Often they are carved as letters after their names, with no further mention given regarding the deeds of the holders that had resulted in them being so honoured. But in other cases I read mentions of campaigns as far back as the Peninsular War and other Napoleonic campaigns.

The Indian Mutiny appeared several times on the memorials that I saw. Perhaps the most moving inscription, for me, was that belonging to a girl in her late teens in a St. Helier, Jersey cemetery that read:

Lavinia Fanny Kelly Hicks, Grand-daughter of the above Mary Symons and the beloved wife of Captain W.J. Hicks H.M.E.I.S, who died at sea on her homeward voyage on the 28th of  April 1858 in the 19th year of her age. Her constitution having been destroyed by the suffering she experienced during the mutiny at Allahabad.

Headstones are a fascinating resource and now that more and more cemeteries and churchyards are becoming available at The Genealogist.co.uk, with a searchable transcript database (see box below) that allows you to view photographs of the headstone and see photographs of the church and surroundings, family history researchers can gain much valuable information they otherwise may miss.

Headstones nationwide are suffering from erosion, and burial grounds from closures for new developments. Often the stones are removed to create green spaces and then reused as paving or destroyed. Volunteers everywhere are now offered the chance to join the project at UKIndexer.co.uk. With every headstone photographed or transcribed, volunteers will earn credits towards subscriptions at TheGenealogist or products at S&N Genealogy Supplies.

So why did I mention at the beginning of this piece that I always take with me a bottle of water and a soft paint brush? Firstly the water is to drink, as not many cemeteries come with refreshment facilities and you may be there for hours. I made the mistake, early on, not to pack a bottle and was so parched by the end of an afternoon that I didn’t make this mistake again!

And what of the soft paint brush? It is to gently remove dust and dirt form lettering in the hope that, by taking a photograph from an angle and allowing the sun to bring out a shadow, you can then read the inscription. Please don’t use chalk or wax on gravestones to reveal the writing. Most substances can damage the stone, adding yet more erosion to that already caused by the acid rain. The only thing that I found recommended to be used, to tease out inscriptions on dusty and ageing headstones, was distilled water.

TheGenealogist.co.uk had added over 22,000 records to its headstone Project with another 23 cemeteries from across the 12 parishes of the Island of Jersey (covering all of the island’s historic cemeteries). Also released are a further 13 cemeteries from Buckinghamshire, Devon, Gloucestershire, Northamptonshire, Somerset, the West Midlands and Wiltshire.

The records are linked to images of the stones and maps to locate the actual burial grounds, they are searchable by name, year of death and graveyard. These monuments can reveal facts, not recorded elsewhere, about the deceased and their family. Dates, carved in stone, can give away real ages misreported to census enumerators. Siblings, with the same name, can be recorded on graves with their birth and death dates and so helping researchers to identify the child that survived infancy.

Some of the famous people that are to be found buried in this release and searchable include Lillie Langtry, the Edwardian actress and friend of the Prince of Wales; Sir William Edmond Heygate Colborne (Billy) Butlin, showman and holiday camp entrepreneur; and the first Baron Trent of Nottingham, better known as Jesse Boot the founder of Boots the Chemists, and his Jersey born wife Florence, Lady Trent.