The last Briton to die in a duel on English soil 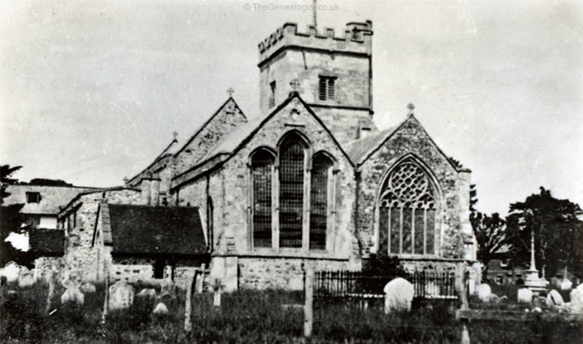 The church of St Mary's Fordingbridge

It was in the early 1840s that James Alexander Seton, and his wife Susannah, rented some rooms in Southsea on the outskirts of Portsmouth. He was a man of means, having inherited his wealth he had no need to work. The son of a Colonel, he had spent a brief spell in the Army as a junior cavalry officer, though his short career never found him being promoted any higher than the rank of cornet. The Seton family were of aristocratic Scottish ancestry, their forebears being descended from the Earls of Dunfermline and Seton’s grandfather was Vice-Admiral James Seton, governor of St Vincent in the Caribbean.

In May 1845 James Seton met Isabella Hawkey, whom he set about pursuing even though he was married and she was the wife of Lieutenant Henry Hawkey R.M. When the coast was clear, and her husband away, Seton began paying visits to Isabella at her lodgings bearing gifts. Presumably Lieutenant Hawkey began to hear the rumours circulating and forbade his wife from seeing Seton again. On 19 May 1845, however, there was a ball held in the King's Rooms, Southsea, which the Hawkeys as well as James Seton attended. When Isabella danced with Seton this caused a quarrel in which Lieutenant Hawkey called Seton a "blaggard and a scoundrel" and told him that if he would not fight him, he would horsewhip him down the High Street of Portsmouth. When this exchange took place Mr. Seton was attempting to leave the ballroom, but Lieutenant Hawkey, who had been sitting on a sofa, rose up, and aimed a kick at him when he passed. Having been insulted by this, Seton decided to issue Hawkey with a formal challenge to settle the point of honour the next day.

Hawkey purchased a pair of dueling pistols and arranged for a fellow Royal Marine officer, Lieutenant Edward Pym, to be his second. On the beach at Stokes Bay, near Gosport, the duelists met to settle the matter. Seton's first shot missed his opponent and Hawkey's pistol was half-cocked and failed to fire. Under the rules of dueling, that could have been an honorable end to it. Hawkey, however, insisted on a second exchange of shots and this time Seton fell when he was struck by a bullet entering his lower abdomen.

Suffering from his wounds, Seton was taken by boat to Portsmouth where he was operated on by two surgeons. The surgery at first appeared to go well, but then infection set in and Seton quickly went downhill, succumbing on the 2nd June 1845. He was buried eight days later after a funeral procession had passed through the town, where most of the shops closed as a mark of respect. Seton was laid to rest in the tomb outside the east front of the church, next to his father, and we can find his burial on the 10th June 1845 in the Hampshire records on TheGenealogist.

From the newspaper and magazine collections on TheGenealogist we can see various reports on the case. The Illustrated London News covered the deliberations of the coroners court jury on the 21st June 1845. They were quite sure that James Seton had died as a result of a surgical operation made necessary by the duel. They even went as far as stating that they found “Lieutenant Hawkey and Lieutenant Edward Pym, as well as all the parties concerned in the said duel, GUILTY of WILFUL MURDER.”

Arrest warrants were issued and the defendant's criminal trials took place the next year. Strangely The Illustrated London News paid more attention to the trial of, Lieutenant Pym, than it did to Hawkey. In March 1846 it commissioned an engraving of the proceedings at Winchester to go with its very full report from the court. This was in contrast to the few lines that they devoted on July 18 1846 when announcing Lieutenant Hawkey had been acquitted.

As it turned out Pym was also acquitted and the next month the papers reported that he had “been restored to his former rank in the Royal Marine corps by her Majesty’s Order in Council.”

By using the extensive military collections on TheGenealogist we can look up the young Royal Marine Lieutenants in both the Army and Navy lists - the Royal Marines appearing in both lists.

The fate of the two officers couldn’t be more different. While at first Henry Charles Morehead Hawkey resumes his career and by July 1849 has been appointed Captain, we can see that on the 14th June 1852 he had been placed on half-pay. Turning back to the Newspapers and Magazine collection, we discover the reason for Hawkey being on half-pay - he had been the subject of a Court Martial that would go on to damage his prospects within the Corps. Found guilty of violently assaulting First Lieutenant Swain, a more junior Royal Marine officer, he was acquitted of the first charge of “conduct unbecoming the character of an officer and a gentleman”. The court had taken into account “the great and long-continued provocation he has received, and the very peculiar nature of that provocation.” His sentence was a simple reprimanded, but despite having his sword returned to him he doesn’t seem to resume his Marine career.

No mention appears in the article of what had incited him. It was of a delicate nature - Isabella Hawkey, the wife once subjected to the unwanted attention of James Seton and for whom Hawkey had fought a duel and killed for, had now entered into an affair with First Lieutenant Swain.

Hawkey’s career in the Royal Marines was now tainted and in July of the same year a report reveals that as a result of the “fracas” and being on half-pay he had purchased a commission in a cavalry regiment. Looking for evidence of this in the Army lists on TheGenealogist, however, reveals no such commission.

By using the Marriages index on TheGenealogist we can find that Hawkey had originally married Isabella Frances Colley in 1840. Using the details to purchase the certificate from the GRO would reveal that her late father had been Augustus Keppel Colley. From the Army lists we can discover him to have also been a one time officer in the Royal Marines.

Hawkey’s marriage now destroyed by the affair, and on half-pay he fell into debt. Sadly we then find his death in the records on TheGenealogist for 1859. This is seven years after his court martial and he is aged just 39. Hawkey had he died of TB in Clerkenwell, London. 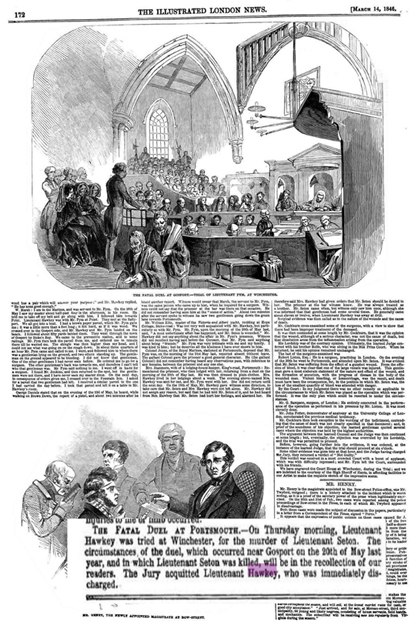 What happened to his estranged wife? From the 1861 census we find Isabella and their children in Chatham living in her widowed mother’s house in Ordnance Place.

Life was somewhat kinder to Lieutenant Pym, Hawkey’s "second" at the duel. After his trial for murder, and his acquittal, he resumed his career in the Royal Marines and unlike Hawkey, he prospered. A search of the Army and Navy lists reveals that Edward Lawes Pym rose in the ranks to become a Major General in the Royal Marines. Unlike Hawkey, whose life seems to have imploded, Pym’s career went from strength to strength. We can find him in the 1881 and 1891 census with his Australian born wife Cecila living in Kensington.

It could have been so very different. The law in England, even at that time, was clear: if parties went out to fight a duel, and anyone died in that duel, all who went out to be present at the fighting of the duel were guilty of murder. The judge, in Pym’s case, drew the jury’s attention to the law and instructed them to tell him, after having heard all the evidence, whether Mr. Hawkey, in their judgement, went out to meet Mr. Seton in a duel, and shot him in that duel, and whether Mr Pym was second to Mr. Hawkey. If they could answer both these questions in the affirmative, their verdict must be "Guilty".

Extraordinarily the jury found Pym “Not Guilty” and when Hawkey came to have his own trial the jury in that case also returned the same verdict. The press of the day were bemused. We can find a report in The Illustrated London News in March 1846 that proposed the reason to be a reluctance by juries to convict knowing that the only sentence possible would be execution.

TheGenealogist provides many records all in one place that can be used to explore the story of our ancestors from Parish Records that reveal their baptisms, marriages and deaths to Newspaper and Magazines that give us an insight into events from the times. If we have ancestors that served in the forces then the Army and Navy Lists can be used to trace the career of our military ancestors and sometimes reveal interesting dates that require further investigation.