Nick Thorne profiles the family of another musical legend from Liverpool

John Winston Lennon, a famous son of Liverpool and acclaimed singer and songwriter known worldwide as one of the founders of the Beatles, was born in war-time England on 9 October 1940 at the Liverpool Maternity Hospital. His parents were Alfred ‘Alf ’ and Julia Lennon (née Stanley). (He was given his middle name in honour of Winston Churchill.) John endured a chaotic upbringing after his father and mother split up when Alf deserted from the Merchant Navy and disappeared for a time. His mother became pregnant by a soldier, then set up home with another man and the young John went to live with his aunt nearby.

John Lennon’s father Alfred was born in Liverpool in December 1912 to John ‘Jack’ Lennon and Mary ‘Polly’ Lennon (née Maguire). Jack, John’s grandfather, had been married before to Margaret Cowley from Liverpool and they had had two children together. She had died in 1892 giving birth to their second child, who only managed to survive his mother by a few days himself. After the death of his wife, Jack and Polly Maguire began living together in a commonlaw marriage with them eventually getting married in 1915 - though Jack boldly wrote their status as ‘married’ on the 1911 census form that can be found in the census collections on TheGenealogist.co.uk Jack, who worked as a shipping clerk/bookkeeper, and Polly went on to have fifteen children together - though eight of them sadly died when they were young. Alfred, John’s father, was the youngest of the brood and after Jack had died in 1921, Polly did not have enough money to keep the whole Lennon family together. She placed two of her children, Alf and Edith, into the Blue Coat School Orphanage. Alf Lennon was known for being musical, though he was never able to pursue it professionally and he could never hold down a job for long until he joined the merchant navy as a bellboy on a passenger ship. He rose to be a steward, though he wanted to go on the stage and so he auditioned for various local theatre managers as an entertainer. Without any success in this he went back to sea and, with World War Two starting, Alf continued to serve until 1943, when he blotted his copybook by deserting, and the pay he sent home to his wife and baby John stopped.

The Lennon family tree can be traced back from John to his father Alf; then to his grandfather, Jack and then another generation to an Irish couple that moved with their own families from County Down in Ireland to Liverpool. John’s greatgreat- grandfather was one James Lennon, who had been born in 1829 and died in 1907. James, a cooper, married Jane McConville (1831-1869) in St Anthony’s Chapel in Liverpool on 19 April 1849 and they had seven children, including Jack in 1855. Shining the spotlight onto the maternal side of John Lennon’s family, his mother had been born Julia Stanley on 12 March 1914 and would be tragically killed when she was hit by a car on 15 July 1958. Julia Lennon was a spirited and musical woman who had been reported twice to the Liverpool Social Services by her eldest sister Mary (known as Mimi) regarding the way she was bringing up John. This resulted in the young John Lennon moving into his aunt and uncle’s house to live, though Julia continued to have almost daily contact with her son. She was responsible for teaching him to play the banjo and ukulele and went on to buy John his first guitar – much to her eldest sister’s disapproval. Julia, also known as Judy in the family, was one of five girls born to George Ernest Stanley and Annie Jane Millward who had married late in 1906. The sisters were, Mary ‘Mimi’ born in 1906, Elizabeth Jane born in 1909, Anne ‘Nanny’ born 1911, Julia born in 1914 and lastly Harriet born in 1916. George had been in the merchant navy before becoming an insurance investigator in Liverpool. Julia had met Alf when she was 14 years old and he 15. Eleven years later, on 3 December 1938, she married Alf at the registry office without her family’s knowledge, having been the one to propose to him. The next day Alf went back to sea and she continued to live under her father’s roof. (George Stanley’s father, William Henry Stanley, was a budding musician in Liverpool, and there were Irish crooners on John’s father’s side, showing he had at least some music in the blood.) 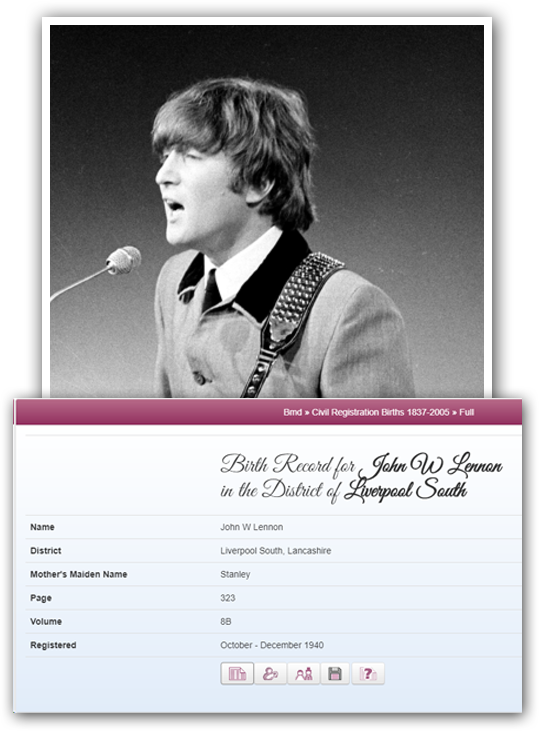 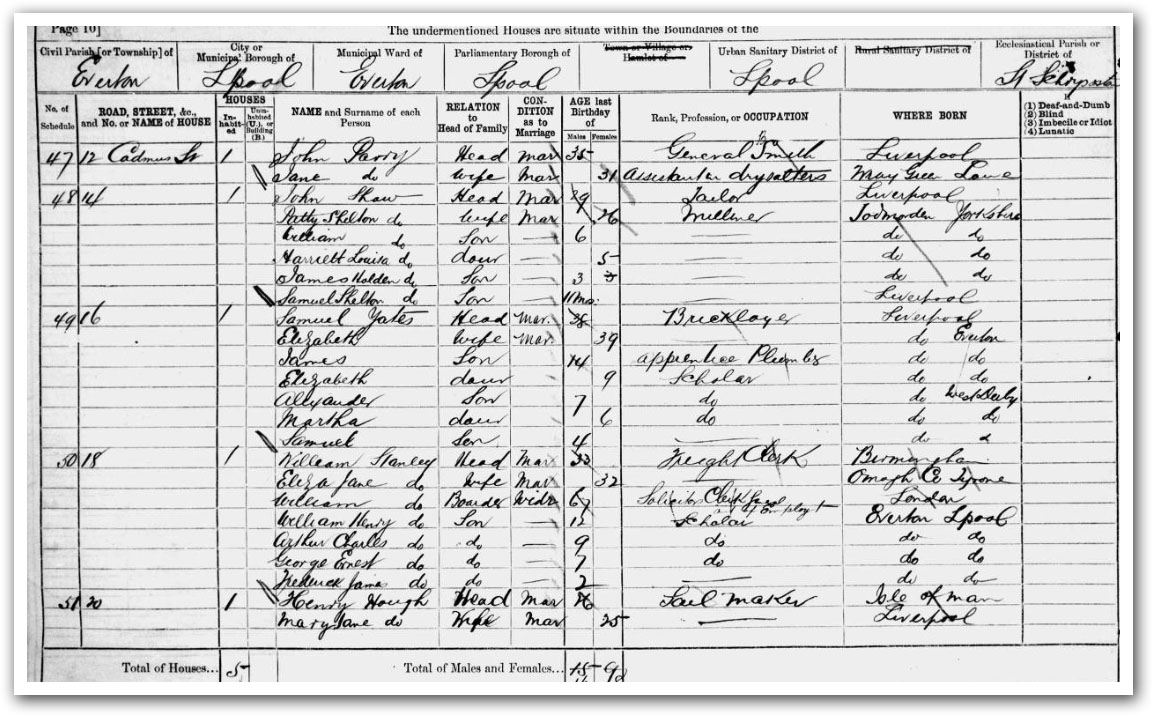 John’s maternal great-grandfather William Henry Stanley with his family in the 1881 census at TheGenealogist.co.uk 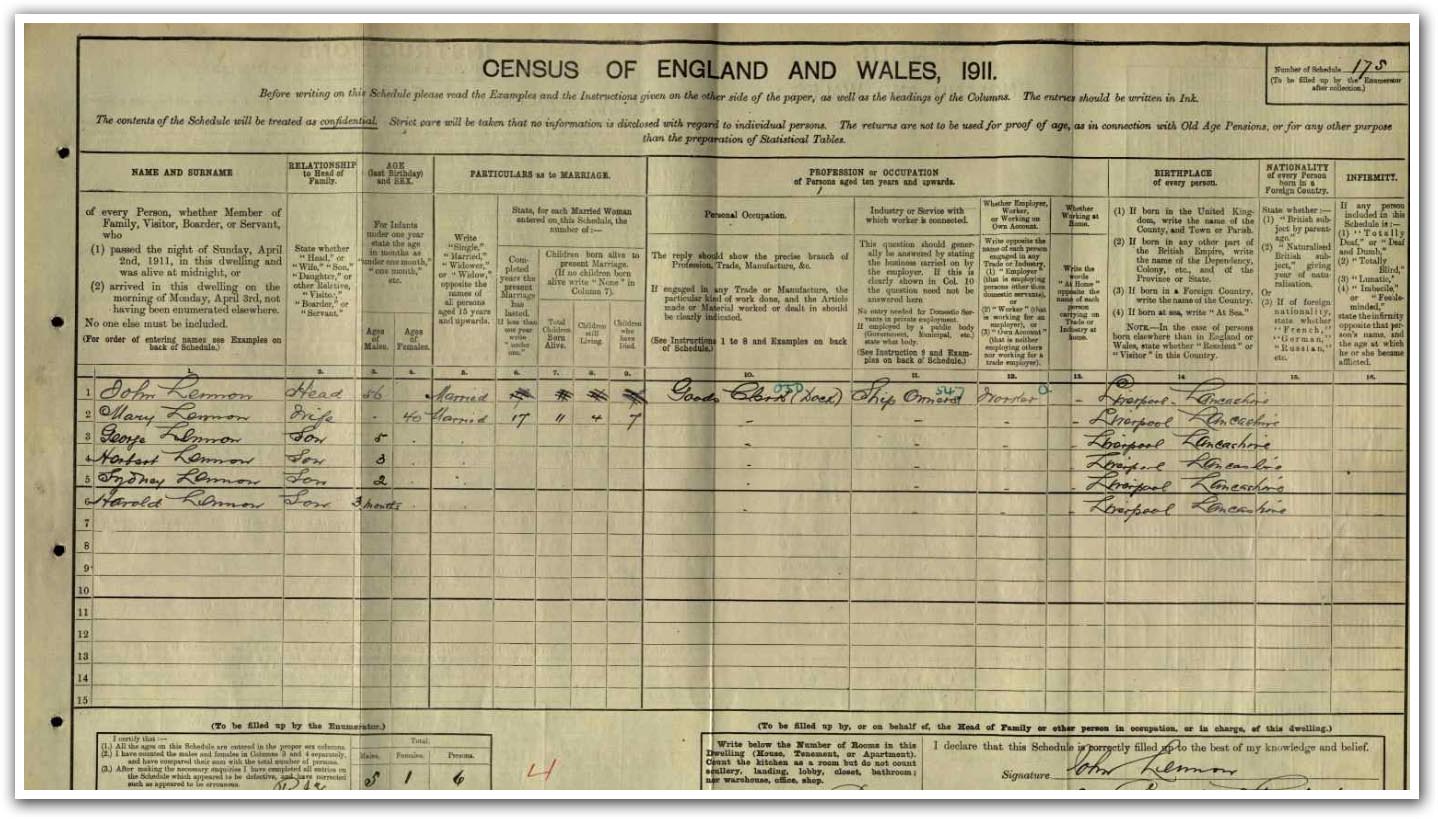 Two years later John Lennon was born and with the outbreak of war Alf continued to serve on merchant ships. Alf’s desertion of the merchant navy and his wife saw the end of their marriage. After this Julia became pregnant by another man and when the child was born the baby girl was given up for adoption under pressure from her family. By this time Alf had returned to the scene and had offered to support Julia, his son and the unborn baby. The idea, however, was rejected by Julia. She went on to live with another man and it was at this stage that Mimi felt it necessary to complain to the social services about her sister’s ability to raise the young John. John’s Aunt, Mimi Smith née Stanley, was the eldest of the five Stanley girls. She trained as a nurse at the Woolton Convalescent Hospital, but later on worked as a private secretary. On 15 September 1939, she married George Smith, who ran his family’s dairy farm and a shop in the Woolton suburb of Liverpool. After her younger sister, Julia, parted from her husband Alf and moved in with a new partner, taking John with her, Mimi contacted Liverpool’s Social Services. Her concerns were over the sleeping arrangements that were limited to one bed between the three of them. Julia was eventually persuaded to hand over the care of her son to the Smiths and John lived with them for most of his childhood. He would remain very close to his aunt, even though she was often dismissive of his musical ambitions and his wives. Famously she had often told the teenage Lennon: “The guitar’s all right John, but you’ll never make a living out of it.” In 1965, John Lennon bought Mimi a bungalow in Poole, Dorset, and she continued to live there until her death in 1991. Although John lost touch with many of his other family members, he kept in close contact with his aunt and telephoned her every week, until his death in 1980. The Smiths’ old house, 251 Menlove Avenue, in Liverpool was later donated to the National Trust. It is easy to understand how John Lennon’s dysfunctional family would be an influence on his artistic work, with John writing several songs about his mother. It seems, however, that he retained a soft spot for his Aunt, who had always been dismissive of his musical ability, yet it was this great talent that took him to the fame and fortune that he enjoyed in his life and his legacy that continues.