The Magnificent woman in her flying machine

When we think of the early days of flight the tendency is to recall those awe-inspiring men braving all in their flimsy flying machines made of little more than wood and fabric. But it should be remembered that flying pioneers were not just confined to the male sex.

A photograph of Mrs Cheridah de Beauvoir Stocks, on the Image Archive at TheGenealogist, raised the question about the first lady pilots in Britain. The picture shows Mrs Stocks on her aeroplane meeting Jumbo the Daily Mirror elephant, one of two elephants imported into Britain to publicise the newspaper. This intriguing picture of perhaps the first Jumbo, on the runway, was the starting point for researchers at TheGenealogist to discover more about who this intrepid young lady was. 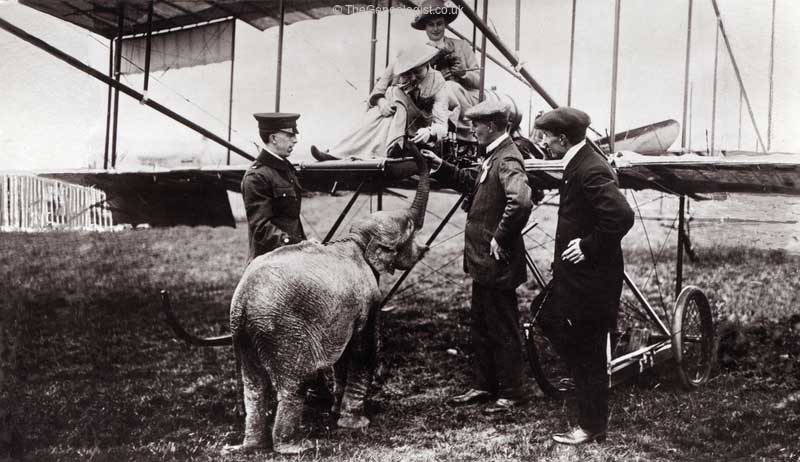 Cheridah was born Cheridah Annie Ernst on the 6 November 1887 in Evercreech, Somerset, England, the daughter of Henry Ernst, a magistrate and landowner, and his wife Annie (née Waring). 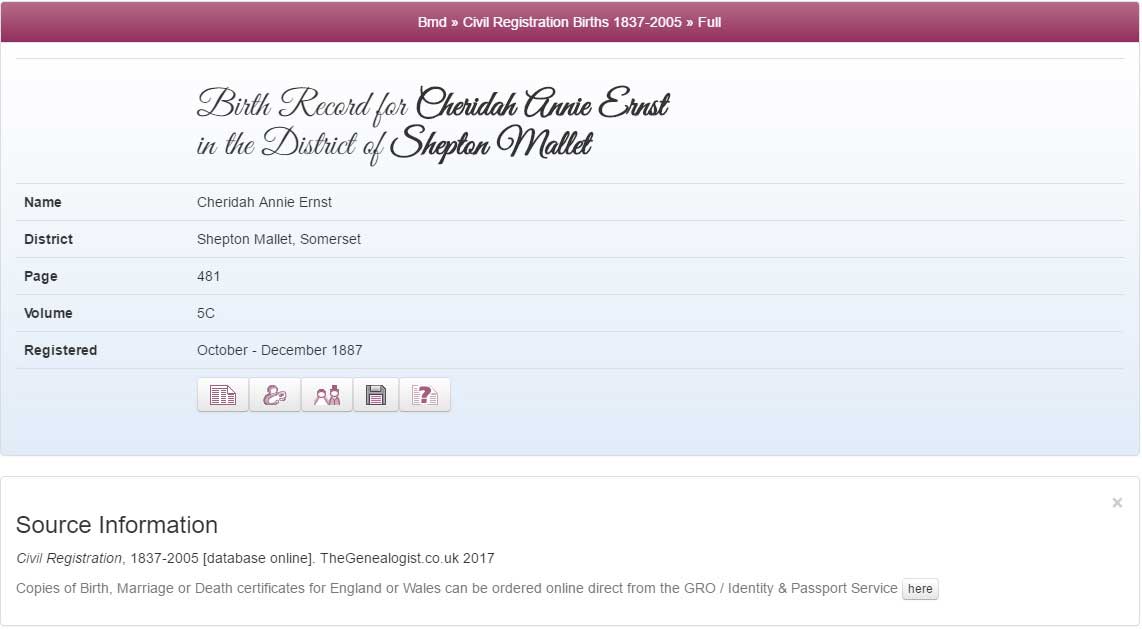 In the census of 1891 we can see that her family were slightly unconventional in that while Cheridah was a child in her third year and her mother was 30 years old, her father was by now 63.

At the time of the 1901 Census the young Cheridah was enumerated in that census as a guest at the swanky Hotel Metropole on Northumberland Avenue, Strand, London with her sister Bessie and her, by now, widowed mother. In a remarkable coincidence this hotel was at one time the base for the Aero Club whose members shared a passion with the grown up Cheridah.

A search of the Trade, Residential and Telephone directories on TheGenealogist finds an entry in the Kelly’s Directory of Somerset and City of Bristol 1897 revealing that Cheridah’s father had been High Sheriff in 1893 to 1897.

Kelly’s Directory of Somerset and City of Bristol 1897

The 1871 return for Somerset as published in the Return of Owners of Land, 1873 and available on TheGenealogist gives us an idea of his landholding: 750 acres.

When Cheridah was eighteen in 1909 she got married in London to David de Beauvoir Stocks. From the indexes on TheGenealogist we can see that the wedding was registered in the upmarket District of St George Hanover Square. 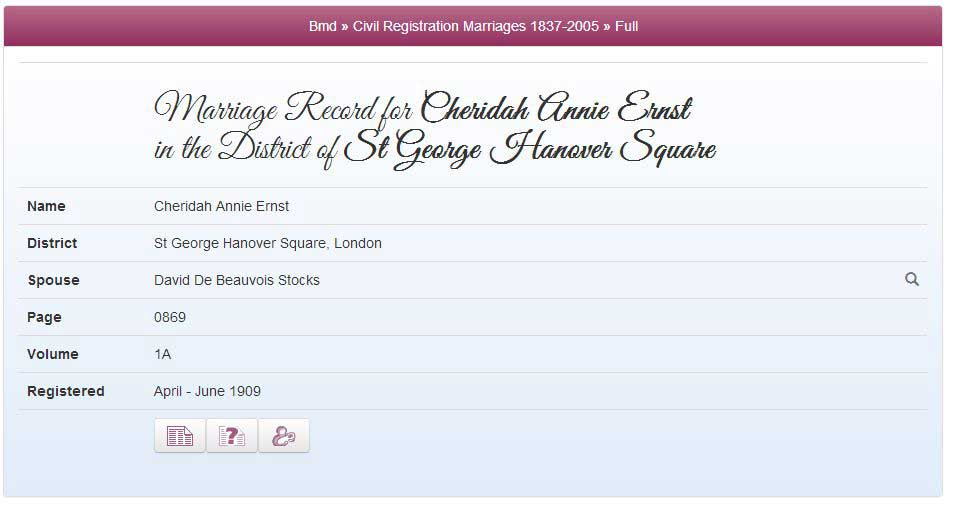 Her husband, David, was a naval officer. Sadly, after less than nine years of marriage, Commander Stocks died on 31 January 1918 when his submarine HMS K4 was lost in an accident during the night time fleet exercises that were later known as the Battle of May Island. The K4 was attached to the 13th Submarine Flotilla and while attempting to avoid a collision with K3, she became the victim of collisions with K6 and K7. HMS K4 was lost with all hands.

A search of the indexes of WW1 Deaths on TheGenealogist finds Commander Stock’s death.

In the years before the First World War and this tragedy, Cheridah Stocks made a name for herself by becoming an aviator. The mix of the glamorous lady aviator with the Daily Mirror’s young elephant was obviously a publicity shot designed to catch the public’s eye. A search of TheGenealogist Occupation collection has found this pioneering woman flyer within the Pilot’s records. 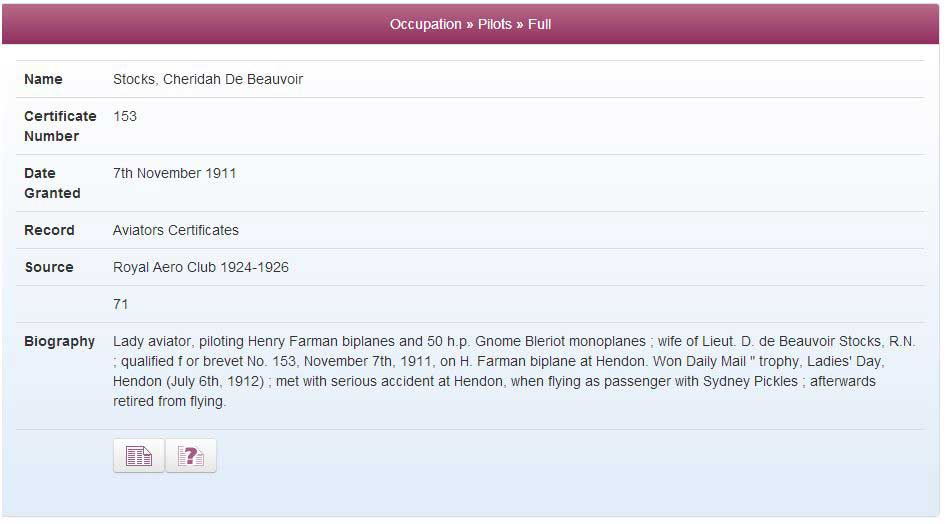 Many of the early female pilots were from that strata of society that could easily afford their exhilarating new pastime and Cheridah was no exception. She trained at the Grahame-White flying school at Hendon and became only the second British woman to be awarded her Royal Aero Club aviator’s certificate - following fellow British woman Hilda Hewlett. It was on the 7 November 1911 that Cheridah Stocks achieved this milestone, passing her test using a Farman biplane at Hendon; at the time she was only 24.

The inspiring lady pilot then became a regular competitor at the various air meets and races at Hendon often flying her Blériot monoplane, or co-flying with male friends in other aeroplanes. It was, while airborne with one of her fellow pilots, that the incident which would bring the end of her flying career occurred. In 1913, just two years after she had obtained her prized aviator’s certificate, she was flying with the pilot Sydney Pickles when the plane spun out of control. The pair crash-landed with Pickles smashing up his leg. A seriously injured Cheridah Stocks was taken to the Central London Sick Asylum, where she remained unconscious for several days - her predicament being followed by the general public in the newspapers.

When she finally recovered Cheridah Stocks was paralysed down her right hand side. Flying was no longer an option for her, though she remained interested in aviation for the rest of her life. She now forged a new career as an anthropologist and went on to study at Oxford in the 1920s where she gained a BSc in Social Anthropology. This trailblazing lady died on 1 May 1971 in Northampton, aged 83.

From a picture found on TheGenealogist’s fascinating Image archive and then using the birth, marriages and death records, plus census and occupational collections on the site, we were easily able to trace this pioneering lady aviator and to discover that she effectively gained her “wings” on the 7th November 1911 when she was awarded the Royal Aero Club’s Aviator's Certificate number 153.