Major the Hon C Mitford DSO in the Roll of Honour in The Sphere, 12 June 1915, on TheGenealogist

Somewhat eclipsed in the wider story of his family, the Honourable Clement Mitford had been a brave career army officer who had fought in the Boer War, been wounded several times, mentioned in despatches and decorated with the DSO. Yet if you mention the name ‘Mitford’, most people will automatically associate it with the famous Mitford sisters – the daughters of David Freeman-Mitford, 2nd Baron Redesdale. The six girls lived controversial but stylish lives as young people and notoriously held very different political beliefs ranging across the spectrum from communism to fascism. Their privileged background came to them as daughters of a peer of the realm with extensive lands. Their father’s title and estates, however, had only been inherited as a result of fate – the First World War death of his elder brother Clement.

It was this Mitford whose atmospheric picture that I came across recently. I was researching in the pages of The Sphere newspaper covering WWI, newly released in TheGenealogist’s Newspapers and Magazines collection. The image of Major the Hon C Mitford DSO appeared in the weekly Roll of Honour feature of The Sphere for 12 June 1915, thus indicating that he had been killed around this time.

World War I was responsible for the industrial-scale killing of men of all classes. Families lost breadwinners and the landed gentry lost some of their eldest sons; Mitford’s father, Lord Redesdale, was no exception.

There had actually been two creations of the title Baron Redesdale over the years, though both were within the Mitford family. The first had been in 1802 for the lawyer and politician Sir John Freeman-Mitford who had been the Speaker of the House of Commons between 1801 and 1802, then becoming the Lord Chancellor of Ireland between 1802 and 1806. His only son, the second Baron, served as Chairman of Committees in the House of Lords from 1851 to 1886 and it was he who, in 1877, was created Earl of Redesdale, in the County of Northumberland. His dying childless in 1886 caused the large estates to pass to the Earl’s first cousin twice removed. The Earldom and Barony, however, became extinct with his death. In accordance with the will, Clement and David’s father, Algernon Bertram Mitford, now assumed by Royal licence the additional surname of Freeman. He would eventually be elevated to the peerage himself in the second creation of the Barony of Redesdale and he would have expected to have passed this onto his eldest son, the Hon Clement.

We can get an idea of the size of the inheritance by looking at land and tithe records on TheGenealogist. Ancestors who owned or occupied titheable land at the time of the tithe survey (1837 to mid 1850s) can be found in the National Tithe Collection that TheGenealogist has put online. Going back to look at the Earl of Redesdale’s landholdings, the results returned show us that his land was spread over several counties that included Gloucestershire, Oxfordshire, Worcestershire and Northumberland. We can also discover the size of these possessions by looking at the tithe apportionment books and further by consulting another set of records on TheGenealogist, those for the 19th century tax survey that provides an index to all individuals who owned 1 acre or more of land in 1873. These records are arranged alphabetically by the county where the land is situated so, as in this case, there may be holdings in more than one county. This survey provides us with the name of the owner, their town or village, the extent of the land they owned in the county and its gross estimated rental value.

The Concise Dictionary of National Biography 1654-1930, from within the Occupational Records on TheGenealogist gives us a precis of the life of Algernon Freeman-Mitford, who would inherit the estates from the Earl. Algernon Mitford had been a British diplomat, a public servant and a Member of Parliament in his time. In 1902 he was raised to the peerage himself as the 1st Baron Redesdale and so his children were now given the courtesy title of Honorable, with his eldest child being the Hon Frances Mitford, a girl born in 1875. The rules of primogeniture, however, meant that the eldest male would eventually inherit both the estates and the title. If circumstances, in the form of the First World War, hadn’t intervened, that son would have been Clement, born in 1876. His untimely death on the Western Front put an end to that expectation and the inheritance passed on to the next son in line.

Clement’s birth in Chelsea is recorded in the first quarter of the next year, 1877, as we can discover by searching the Births and Baptism records on TheGenealogist. The transcript gives us all the necessary details for us to purchase a certificate from the GRO. 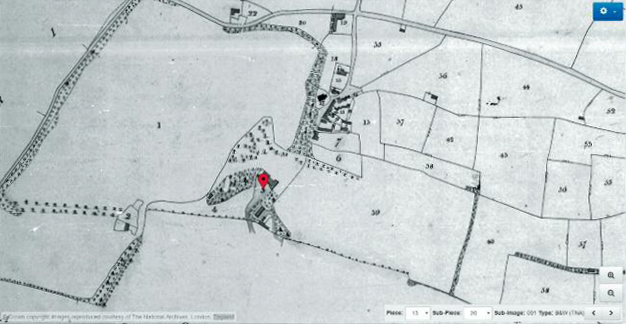 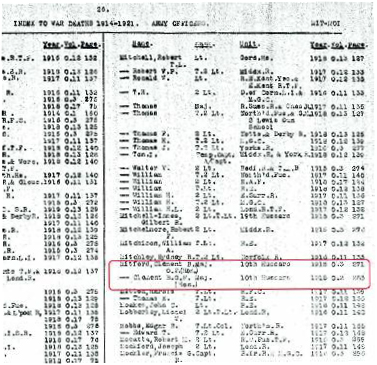 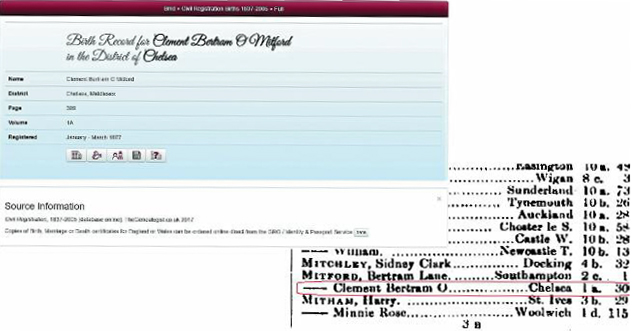 The Hon Clement Mitford’s death occurred in the Battle of Loos, France, so we can turn to the General Register Office Indexes for Overseas War Deaths on TheGenealogist that compliment the GRO Indexes for England and Wales. For some reason Clement appears to have been recorded twice and the index reflects the two different volumes in which he was recorded by listing both.

Having seen in the Roll of Honour in The Sphere that the Hon Clement had been wounded twice in the war in South Africa we can discover more by turning to Hart’s Army List 1908 on TheGenealogist, in which we can read details of the various operations that he was involved in. The Sphere had indicated that he had joined in 1899 and Hart’s reveals the dates of this career officer’s promotions.

Searching further into the military records on TheGenealogist, we can find a card for Major the Hon CBO Mitford recording the date of his mention in dispatches being gazetted. From this we can tell the page number and date of its publication in the London Gazette, while another card gives us the World War I Campaign Medals that he was entitled to.

TheGenealogist’s extensive military collection includes the casualty lists from the First World War and within these we find that the Major has two incidents recorded. The transcription of the first tells us that he was wounded in the autumn of 1914 and also gives the particulars of his rank and his regiment – the details having been taken from the Officer Daily List for 1 November 1914 in a report received on 26 October. These announcements had been printed in the daily newspapers, having originally being sourced from His Majesty's Stationery Office. The second report is from the next May – this time it is for his death on the Western Front.

From this record we are able to click on a link that will take us directly to the Commonwealth War Graves Commission website where we can find details of his burial at the Vlamertinghe Military Cemetery in Belgium. Though he is interred abroad, we can also find a war memorial in England in the records on TheGenealogist for Major the Hon Clement Mitford. Within the War Memorial collection he is to be found inscribed on a plaque in Moreton-In-Marsh top cemetery.

While to most people the Mitfords are just six famous sisters, a browse of the recently released copies of The Sphere on TheGenealogist website presented me with a distinctively moody image of one of their family in the publication’s Roll of Honour. Intrigued to discover more about the brave officer who had lost his life in the First World War, I was able to discover that this had been their uncle.

I found out that the Hon Clement had been in line to inherit substantial landholdings across the country, along with his father’s peerage. Fate, however, saw that this was not to be the case. Clement’s untimely death, which we found among a number of other military records on TheGenealogist, propelled the Mitford sisters’ father from a younger son to eventually inherit in his brother’s place. The sisters’ grandfather had, himself, come into the various estates in the first place from a bequest in a distant cousin’s will.

As has been demonstrated neatly here in the Mitford family tree, when researching our ancestors we need to be aware how chance can intervene in the smooth passing of property, or even titles, sideways in a family.

The Concise Dictionary of National Biography 1654-1930 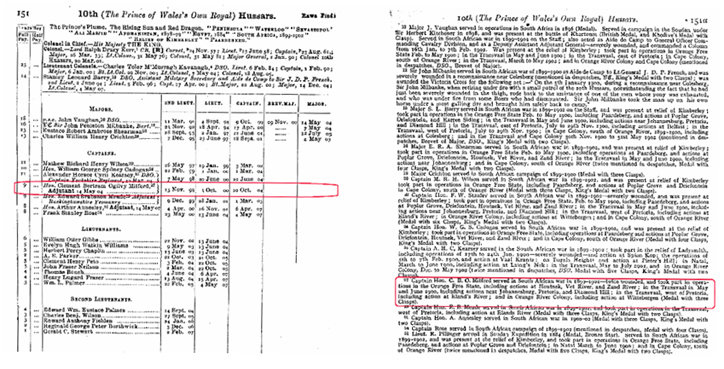 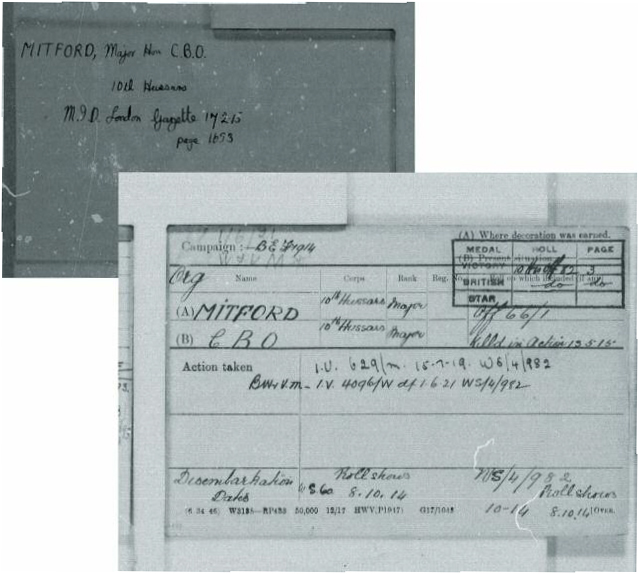 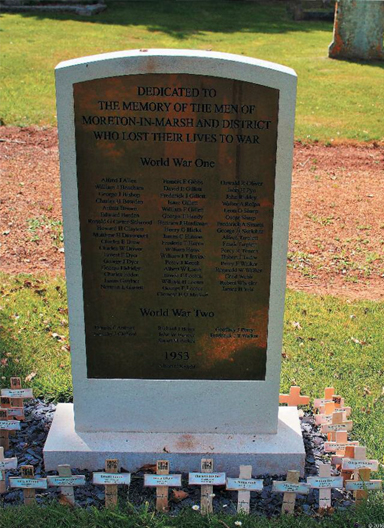