The search for Mr Nesbitt

Last month I downloaded my copy of Discover Your Ancestors containing an article I had written about the search for a mysterious amateur rugby player from Sunderland who went off to war. The title was ‘The Search For Mr Vinneycombe’ and Mr Vinneycombe was, supposedly, the last piece of a team jigsaw I had been assembling over four years. Later that day I wrote to all and sundry declaring that with 11 November and the centenary of the end of the war in view, I was finally coming to an end of my First World War research. Within 24 hours I had recanted. The reason? A Mr N Nesbitt – and this is why!

On the evening of 9 November 2018 I was going to a rugby union match between Newcastle Falcons and Bath. In the 19th and 20th centuries, the now professional Falcons were known as Gosforth Nomads. They were founded about the same time as my local club Sunderland, towards the end of the mid-Victorian period, and I mused just before the match that they must have met each other just prior to the war. Thus it might be a nice final gesture as the centenary was at hand to find the teams. I did – in the Newcastle Journal for 31 January 1914 on the very day the two clubs had met at 1st XV and 2nd XV level. To my annoyance I had the war records of all (including the mysterious Mr Vinneycombe) but one of the Sunderland 2nd XV. This was a number 14 or winger named as N Nesbitt.

Yet I had just declared the intention of ending my war researches and returning the club membership book for 1913-18 to the archive. This book was still on my desk so I wondered and opened it at the page marked ‘N’ and discovered that a Norman Nesbitt of 17 Salem Hill had paid 15/- for membership in 1913 when he was 24 years of age and that by 1916 he had ‘left the town’. He was the only N Nesbitt in the membership book so the next step was simple as the computer was switched on – to see if he was at that address in 1911 via TheGenealogist’s invaluable addresses search engine. The search was immediately successful.

Surely this was the right man. There were local Nesbitts in the club but this was not one of them and was the only N Nesbitt in the membership book. He was a young bank clerk who had taken rooms (or a room) in a Victorian terrace in multiple occupation, was uncertain (as such) whether he was a ‘boarder’ or ‘head of house’ and was the right age for our club member. Furthermore we learn that he was born up the road on the Tyne and so the search moved swiftly there and to the census of 1891. 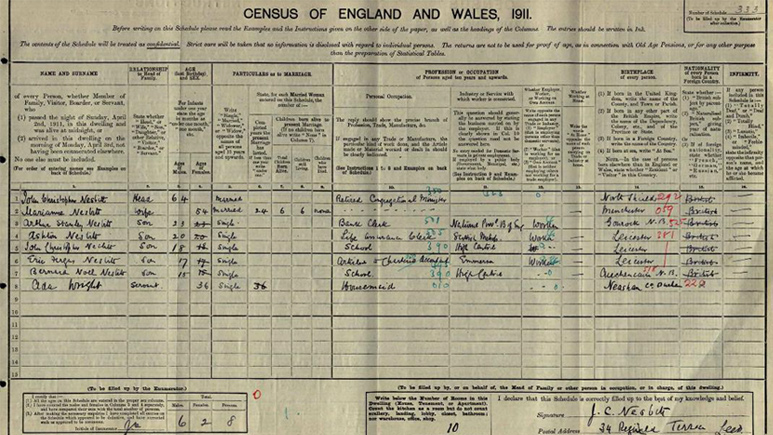 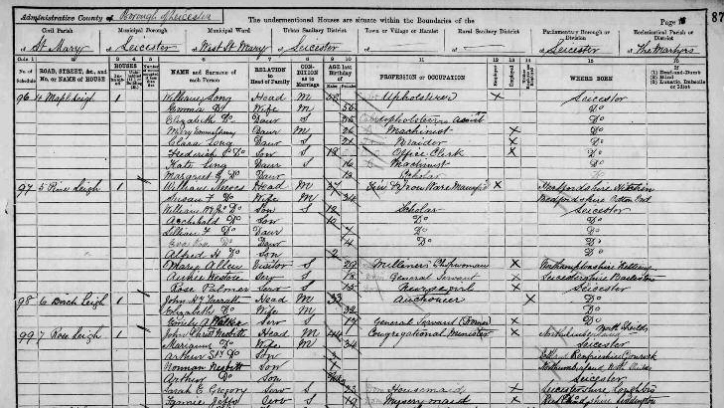 So he was the son of a Northumbrian born Congregational Minister – John Christopher Nesbitt and his wife Marianne – both unusual names which is fortunate in this type of research. I still had some time before going off to the match so I looked up the main family in 1911 when their Norman appeared to have been in Sunderland. Both John Christopher and Marianne worked in bringing up the same relevant result.

A number of things struck immediately. Here was a Congregational minister who, as with Methodist ministers, moved around a great deal – with the children born in various places. More strikingly in 1911 here were five sons who, by swift calculation, might have been expected to play a part in the 1914-18 conflict with a sixth one – rugby playing Norman – also eligible but elsewhere at census time. It was a last minute thought before I left for the match but a ‘Google’ is always worthwhile and so I entered the father’s unusual name and the name of his Sunderland-based son thus – ‘John Christopher Nesbitt’ Norman – and, to my total amazement was met with the British First World War equivalent of Saving Private Ryan – under the title of ‘The Leyburn Band of Brothers’ – see https://groundsforappeal.blog/2017/12/15/leyburn-band-of-brothers/.

After the match I entered Norman’s name into the ‘Military’ Search Engine of The Genealogist and came up with at least four references to this unfortunate youngster who had given his life towards the very end of the war while serving in the Royal Naval Division at the Front.

Before the match, the media man at the Falcons, Mark Smith (who was familiar with my Sunderland work), kindly informed me by return email that I would find the old Gosforth shop. The Falcons are now a significant professional side and the shop was packed when I went in prior to the match but I managed to note down the names of the players lost and as I had run off the January 1914 team sheets and brought them with me was able to come to some swift conclusions.

The Gosforth Nomads 1st XV all seem to have survived the war while at least six of their Sunderland opponents did not. In the Nomads 2nd XV five names appeared on the plaque with a further five from Sunderland, including Norman, victims of the conflict. In other words – of the 60 who turned out to play on 31 January 1914 at least 16 lost their lives. For the 2nd XVs the figure was an appalling one in three.

The following day I was at Twickenham where the wartime losses to international rugby were recalled prior to the dramatic England v All Blacks match. The morning after I returned to Sunderland to watch a former military friend and fellow club member lay down a wreath at the Cenotaph in memory of the club fallen. The wreath was in the club colours of yellow, red and black.

In truth, the discovery of Norman’s remarkable story, if in outline only, took but a little time thanks to the wonders of modern technology. As for the war itself I hope that it is the case of job done with this as my ‘last post’ – but evidence seems to show that you never know! 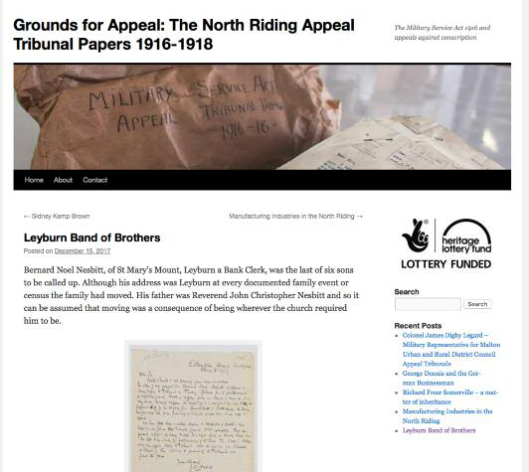 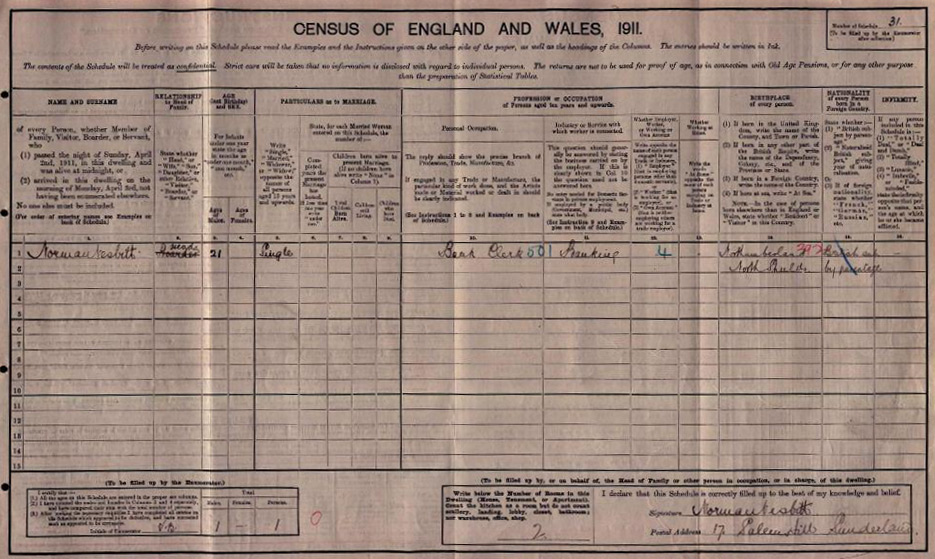 Norman’s parents, John Christopher and Marianne Nesbitt, in the 1911 census at TheGenealogist

Come on the Durhams

Keith Gregson has written and performed a song about the Sunderland rugby players who died in the war, ‘Come on, the Durhams’ – you can listen to it at https://youtu.be/KLBWjmJGXAo. His detailed research is also available in an ebook via his website, www.keithgregson.com. The men named in the song all played rugby for SRFC at some point and are: