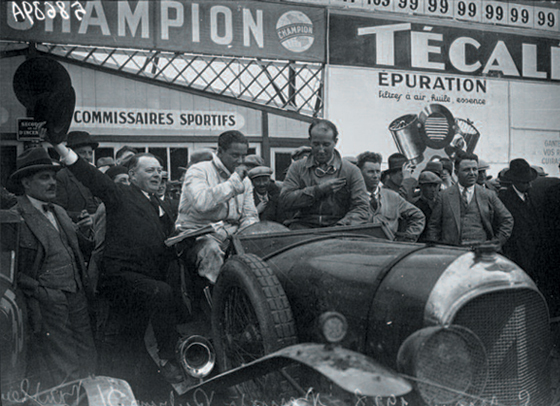 Woolf Barnato was the heir to huge riches that came from his family’s business interests in the Kimberley diamond mines of South Africa. As a ‘Bentley Boy’ – one of the marque’s racing drivers – he was considered to be the best driver on the team by none other than WO Bentley himself. Barnato had an impressive record with three wins in three starts at the gruelling Le Mans 24 hours race for 1928, 1929 and 1930. The brilliant sportsman was known to be a bon viveur and a generous host and in 1926 he became chairman of Bentley Motors at a time when the company was struggling for capital. Barnato was the man behind the 1930 race, in which he pitted his Bentley Speed Six against the Blue Train from Cannes to Calais. He wagered £200 that he could easily beat the train but, despite none of his dinner companions taking up the bet, he set out to race it anyway. The result was that he arrived in Calais so far ahead of the train that he continued on to London, crossing the Channel in a steamer. When he parked his Speed Six outside the Conservative Club in St James’s Street, the Blue Train had yet to arrive at Calais – something it did four minutes later.

Barnato acquired his first Bentley car in 1925 and just 12 months later he also became the owner of the business itself, having invested in order to save the company. With his three-litre car he won numerous Brooklands races and became a member of a social set of affluent British motorists known as the ‘Bentley Boys’, some of whom, like Barnato, were often ex-military service.

To trace this colourful character’s family roots we can start by using the birth records on TheGenealogist. In these we are able to find Woolf Barnato’s birth in August 1895, registered as Joel Woolf Barnato in the Westminster district for the last quarter of the year. Barnato went to Charterhouse school, as did his brother, and we can find their listings in the Educational records on TheGenealogist. This register notes their wartime service with Woolf in the Royal Field Artillery and having attained the rank of captain. It also lists his initials as WJ rather than JW. Presumably he had adopted Woolf as his first name, rather than Joel as we might have expected from the birth record. They also appear in the 1911 census as 16- and 15-year-old pupils boarding at the school just outside Godalming in Surrey.

Searching the Military records on TheGenealogist finds Captain Barnato’s WWI campaign medals and within the newspaper collection we can find him included in a picture of a group of officers. He was a lieutenant at the time of the photograph in The Illustrated War News – July 7 1915.

In the Second World War, however, he changed branch of the armed services and served in the Royal Air Force Volunteer Reserve (RAFVR). A search of TheGenealogist returns details of Squadron Leader Woolf Barnato in Kelly’s Handbook to the Titled, Landed and Official Classes 1942. 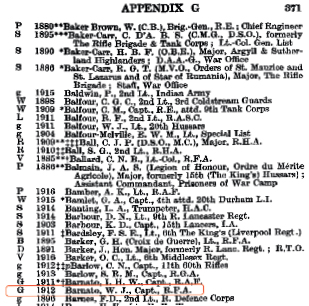 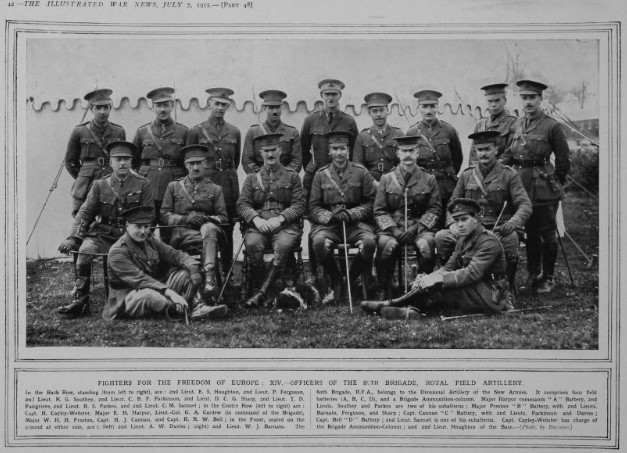 This entry alerts us to the fact that Barnato married three times. His first was to the American, Dorothy Maitland Falk, and though she was from New York the wedding took place in 1915 at Marylebone in London. His second marriage was to another lady from the USA, Jacqueline ‘Jack’ Claridge Quealy of San Francisco. The nuptials took place in 1932 and was in the United States where his wife was the daughter of a wealthy colliery owner. His last wife, not mentioned in the extract from Kelly’s as the union was to take place five years later, was called Joan Jenkinson, or Isachson. This last ceremony was in Surrey in 1947.

The two British marriages are to be found in the marriage records on TheGenealogist and we can also find his American second wife travelling with Barnato and their son in the BT27 passenger lists, also searchable on TheGenealogist. The Barnatos were travelling on the French ship, the Ile De France, on its passage from Plymouth to New York which had departed on 4 October 1933. 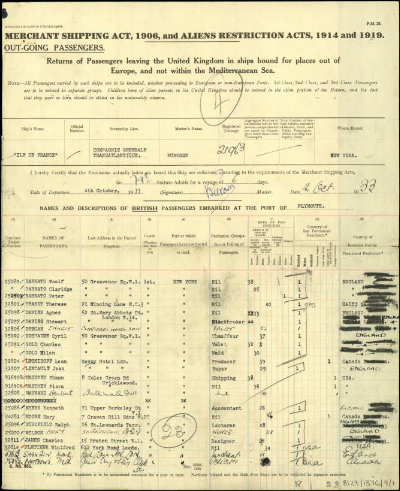 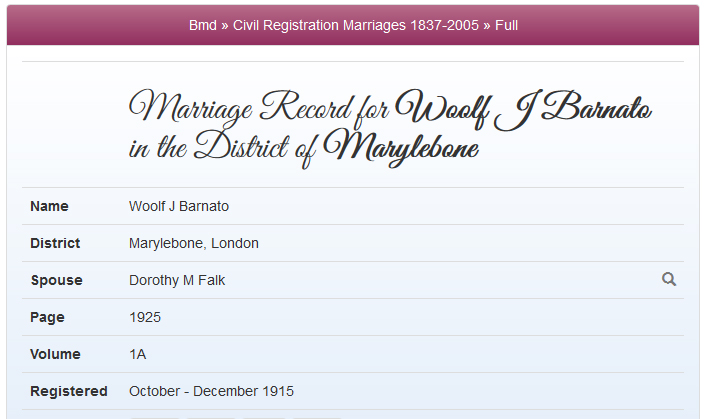 First of three marriages was to Dorothy M Falk 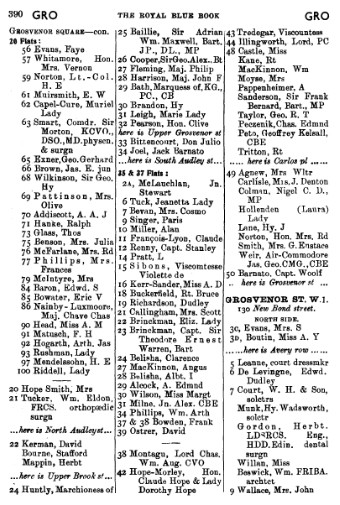 The address given on the passenger list is 50 Grosvenor Square and this matches the address listed in the Royal Blue Book 1939 for Captain Barnato in the Peerage Gentry & Royalty records on TheGenealogist, this being from the year before he joined the RAFVR and took on an air force rank.

Searching further in the records of the Peerage, Gentry & Royalty on TheGenealogist returns us the entry in Armorial Families Vol 1 for Woolf Barnato, Gentleman. This also reveals his coat of arms and the name of his parents.

His father, we read, is the late Barnett Isaacs Barnato. Researching in The Concise Dictionary of National Biography 1654-1930 explains that the family surname had been Isaacs and that Barnett Barnato had gone out to South Africa in 1873, assumed the name Barnato and traded as a diamond dealer at Kimberley. His business had flourished and eventually amalgamated with the famous De Beers company. Tragically things went wrong and it seems he drowned himself while returning from Cape Town in 1897.

The Dictionary of National Biography Vol XXII gives a fuller account of Barnett Barnato’s life and in the Newspapers and Magazines we sadly find the obituary placed by his wife in the Jewish Chronicle for 14 June 1907 to mark the anniversary that her husband had ‘sought rest’ in 1897.

Woolf ’s mother, Mrs Barnato, appears in various Jewish seatholder records on TheGenealogist, for her synagogue at Brondesbury NW6 in the 1930s and previously at New West End in the 20s.

Barnato senior, we learned from The Dictionary of National Biography Vol XXII had, on a visit home, set up a British business with his brother in 1880 called Barnato Brothers. This continued to trade in the City of London and in the recently released 1910 Lloyd George Survey, on TheGenealogist, that links property records and extremely detailed Ordnance Survey maps we can locate the exact office that the business used in Austin Friars near Throgmorton Avenue.

From Bentley company owner to diamond miners, the Barnatos were a stylish family that we have been able to find in a wide range of records on TheGenealogist that can be used by many family historians to trace the roots of their family. The Barnatos, we saw, appeared in BT27 passenger lists, educational records, military, newspapers and Jewish records. Also we used the excellent new resource on TheGenealogist, the 1910 Lloyd George Survey, to locate the exact building that Barnato Brothers had occupied in the City of London in that year. 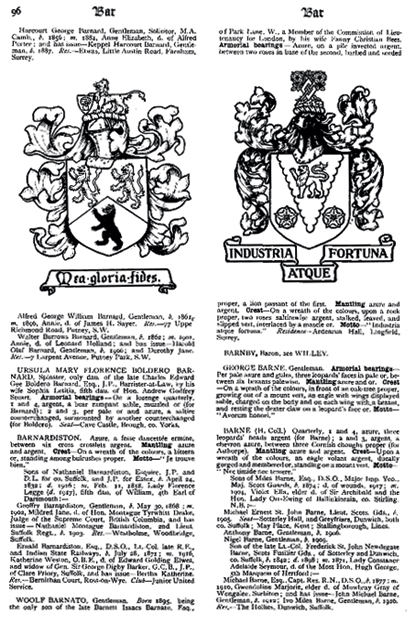 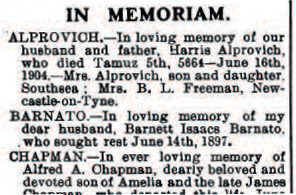 Jewish Chronicle 14 June 1907 from the Newspapers & Magazines on TheGenealogist 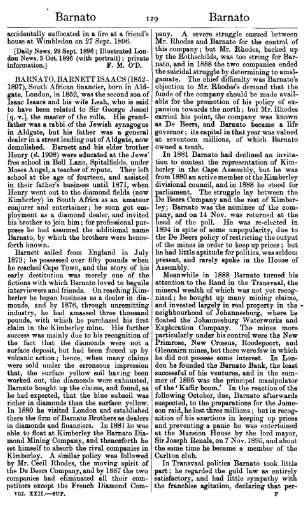