Nick Thorne charts the life of a remarkable survivor not only of the Titanic, but also of shipwrecks and wartime dangers

The sinking of the RMS Titanic, the largest ship afloat when launched in 1912 and thought to be unsinkable, was a maritime tragedy of enormous proportions. On her maiden voyage from Southampton to New York, she struck an iceberg in the mid-Atlantic Ocean. But the story of the most senior crew member of the ship to survive the disaster is a remarkable one - Second Officer Charles Lightoller certainly had more than his fair share of excitement both before that fateful night and after.

Born in Chorely, Lancashire, on 30 March 1874, Charles Herbert Lightoller was from a family who had been working in the cotton-spinning mills in the county since the late 18th century. Sadly, his mother Sarah Lightoller, died shortly after giving birth to him. His father, Fred Lightoller, then abandoned young Charles and left for New Zealand after reputedly having a scandalous liaison with a maid.

At the age if 13, the young Charles began a four-year seafaring apprenticeship on board the barque Primrose Hill. His second voyage, sailing with the crew of the Holt Hill, hit a storm in the South Atlantic that forced the ship to put in at Rio de Janeiro for repairs. A process that took place in the midst of a smallpox epidemic and a revolution.

Lightoller was 15 when he experienced his first shipwreck. On 13 November 1889, during a storm in the Indian Ocean, the Holt Hill ran aground on an uninhabited island. Rescued by a passing ship, the crew was taken to Adelaide in Australia. In order to get back to England, Lightoller joined the crew on the clipper shop Duke of Abercorn. Lightoller qualified as a mate in 1895. By using the BT27 passenger list records on TheGenealogist, we are able to locate him. This time, he is a passenger rather than a crew member, and is on board the SS Parisian sailing to Halifax, Canada, in 1898.

By 1907 Lightoller had now been promoted to First Officer on the ships SS Majestic and RMS Oceanic. Early in 1912 he received his next assignment: RMS Titanic. We can find him listed as a crew member in the Titanic Passenger List, which is part of TheGenealogist's Miscellaneous records, and see that he was second officer on this voyage.

Asleep in the cabin, when the ship hit the fateful iceberg, Lightoller supervised the loading of women and children into lifeboats by using his pistol the ensure order. The First Officer was concerned about lowering the lifeboats early, but Lightoller, with his experience of the shipwreck on the Holt Hill, recognized the sign of imminent disaster and asked the Captain's permission to lower the boats. As the catastrophe unfolded, he refused to get into a collapsible boat, and was almost killed as the ship went under and one of the funnels collapsed. Lightoller found himself clinging to an upturned collapsible. He and the survivors managed to get in and he took charge of the lifeboat, calming and organising the 30-odd cold and wet occupants. When rescue came in the form of RMS carpathia, Lightoller was the last survivor to be taken on board.

Searching for this brave officer in the Reference Book record sets on TheGenealogist reveals more about Second Officer Lightoller and the fatal voyage of the Titanic. Several results are returned including The Deathless Story of the Titanic and The Sinking of the Titanic.

The death of Charles's mother, when he was a newborn, is also on TheGenealogist. She died just aged 30. 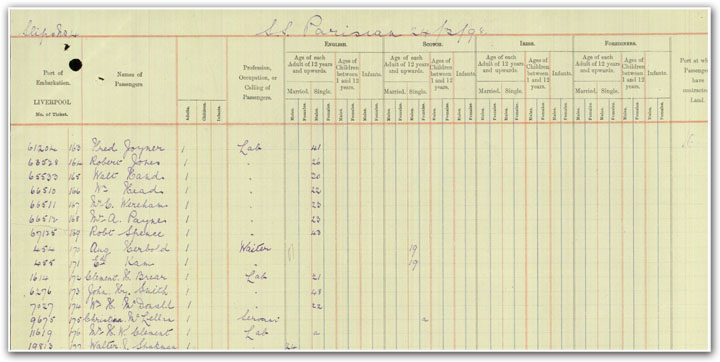 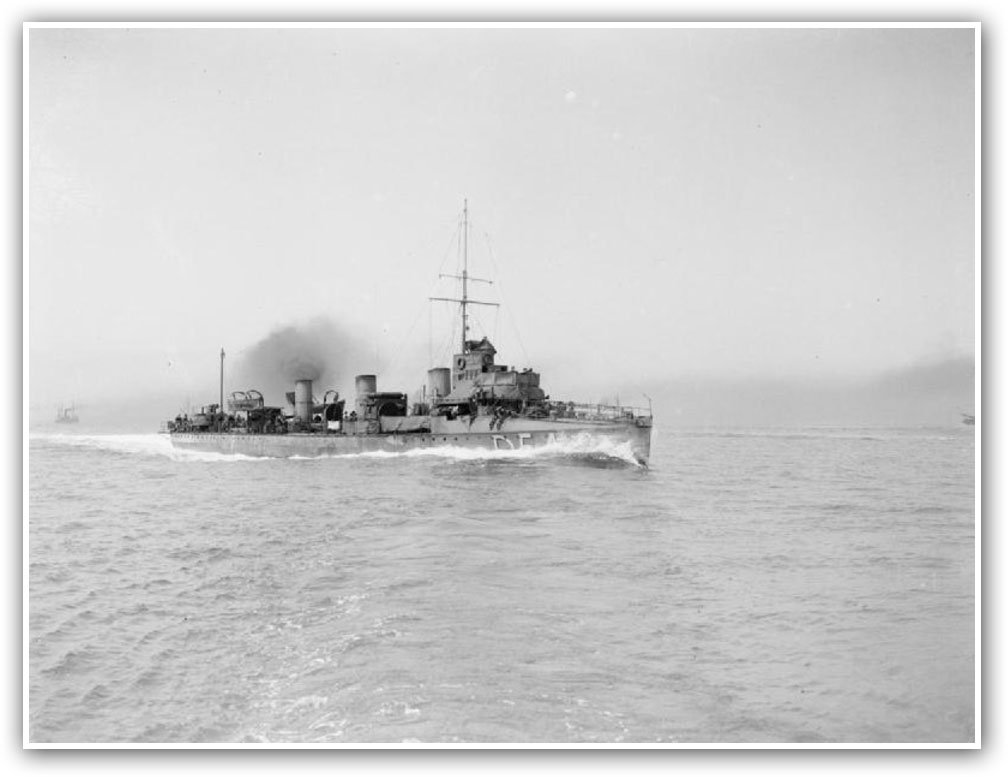 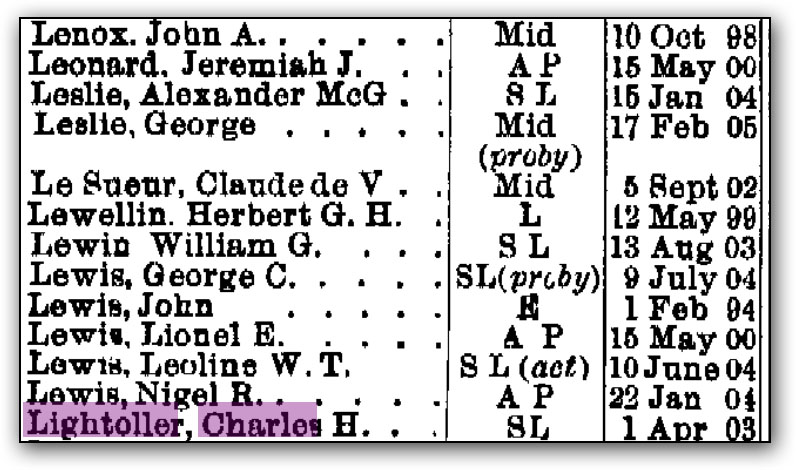 After the sinking of the Titanic, Lightoller distinguished himself as a Royal Navy Reserve officer in World War 1. We can find him in TheGenealogist in many of the Navy Lists from the period. In 1916, whilst captain if the torpedo boat HMTB 117, he attacked a Zeppelin with the ship's guns. For these actions, he was decorated with the Distinguished Service Cross and the Navy List of 1918 on TheGenealogist, shows that he received this award on 23rd May 1917. After this came the command of HMS Falcon, a C-class torpedo-boat destroyer. We can find this information about this ship in the 1918 Navy List on TheGenealogist, by searching for its captain. HMS Falcon brought his next brush with death as she sank in 1 April 1918 after a collision, in fog with HMS Fitzgerald on escort duty to a convoy in the North sea. Lightoller was subsequently given command of the River-class destroyer HMS Garry and was awarded a bar to the DSC in 1918 for sinking the German U-Boat the UB-110 by ramming her. HMS Garry's bow was so damaged that Lightoller was forced to steam 100 mils in reverse to return to port for repairs.

Having traced a number of the ships on which Lightoller served, we are also able to find his shore-based addresses by using the Trades, Residential and Telephone Directory records on TheGenealogist These range from Station Road, Southampton in 1913-1914 to a 1933 entry that not only reveals his full address but also gives us his telephone number at the time!

Charles Lightoller retired and with his wife, bought a motor yacht called Sundowner, to sail together. With the start of World War 2, and at the age of 66, Lightoller with his small vessel found himself pressed into service for his country. It was 1940 and the most famous rescue operation of World War 2, Operation Dynamo, was about to take place. The 'Little Ship' rescue mission was tasked with evacuating troops from occupied France. 400,000 Allied Soldiers had been trapped on the beaches near Dunkirk, with German tanks just 10 miles away from them.

On 30 May, the Admiralty tried to requisition the Sundowner to sail her to Dunkirk as part of the rescue flotilla. The old seadog Lightoller though insisted on piloting her himself along with the help from his eldest son Rodger and an 18 year old Sea Scout named Gerald Ashcroft.

Sailing from Ramsgate with 5 other ships on 1 June, Sundowner encountered a motor cruiser called Westerly, which was on fire. Picking up the crew, Lightoller headed on to Dunkirk to complete the operation.

Even though Sundowner noy had a 21-person capacity, Commander Lightoller managed to squeeze 130 men on board the boat. It was certainly not plain sailing on the way back, as Sundowner came under enemy aircraft attacks. Lightoller's skillfull and techniques however, allowed the boat and her passengers to survive the Luftwaffe attempts to sink her. The boat's biggest hazard actually came from the wake of the fast moving British destroers in the vicinity. With the excess weight of the soldiers, Sundowner was lying deeper in the water than she was designed to do and in real danger of being swamped by the larger ship's wash.

Having safely evacuated the troops back to England, the retired Royal Navy Reserve officer and Titanic survivor was then recognised once more. He was mentioned in dispatches for his contribution to the rescue. The unsinkable Charles Lightoller died aged 78 on 8 December 1952. The index of his death being the last record he has in TheGenealogist's comprehensive record collection. 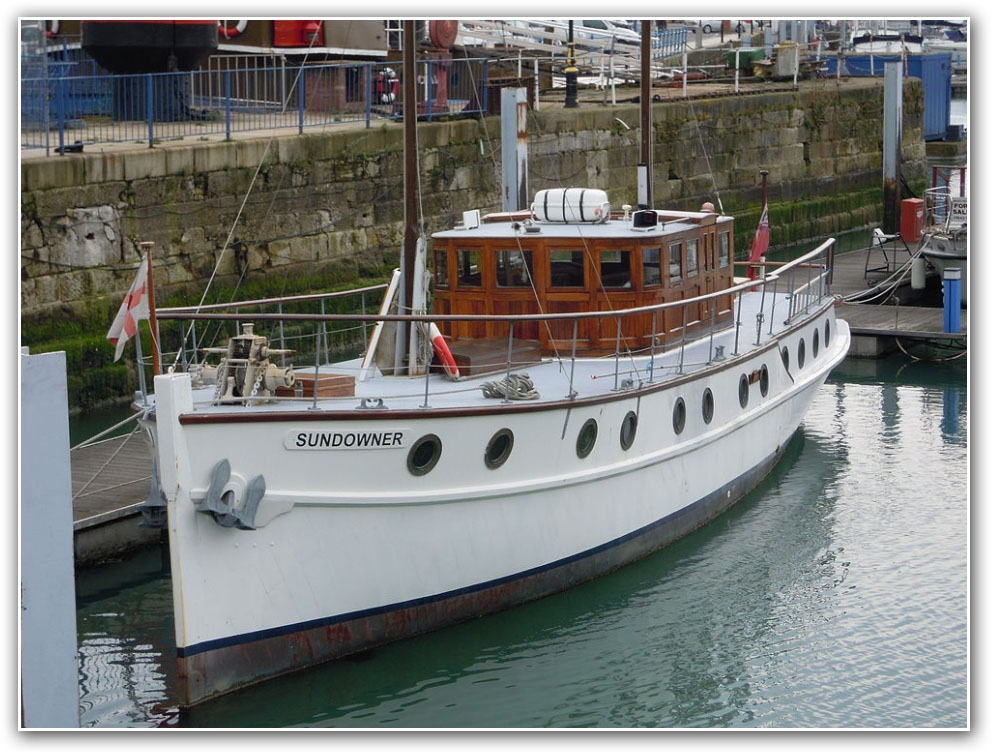 During World war 2, Lightoller went into action again, with his 'little ship', Sundowner