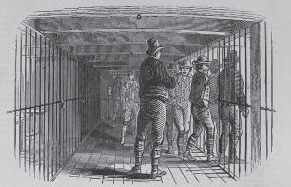 TheGenealogist has added 651,369 quarterly returns of convicts from The National Archives’ HO 8 series of documents to its Court & Criminal Records collection. With this release researchers can find the details of ancestors that broke the law and were incarcerated in convict hulks and prisons in the 19th century.

These fully searchable records are from the Home Office’s sworn lists of convicts on board the convict hulks and in the convict prisons (HO 8). They give the family history researcher fascinating facts that include the particulars of age, convictions, sentences, health and behaviour of the convict, as well as which court sentenced them and where they were serving their sentence.

TheGenealogist has added Colour Tithe Maps from The National Archives to its National Tithe Records collection. With this release researchers can see the plots owned or occupied by ancestors that lived in this ‘home county’ at the time of the survey in the 19th century.

The new data includes over 40,000 plots of land covering the years from 1837 to 1855, with some much later plans of altered apportionments. The new data adds to the site’s apportionment record books and previously published greyscale maps. The records cover all levels of society from large estate owners to occupiers of tiny plots such as a cottage or a cowshed. Read more at www.thegenealogist.co.uk/featuredarticles/2018/buckinghamshires-colour-tithe-maps-online-748/.