Through adversity to the stars 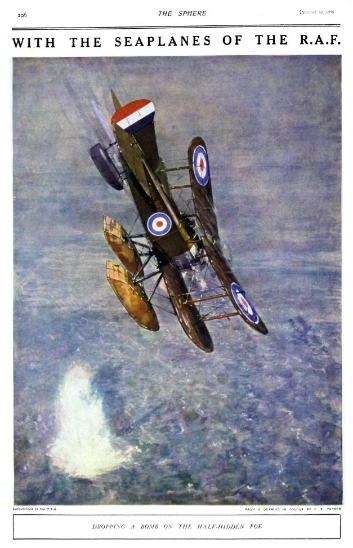 The Sphere August 10 1918 on TheGenealogist

On 1 April 1918 the very first air force in the world to be independent of army or navy control came into being: the RAF. Towards the end of the First World War saw the pilots of the Royal Flying Corps and the Royal Naval Air Service being amalgamated into a new airborne branch of the military, taking as its motto ‘Per ardua ad astra’ which translates in English as ‘Through adversity to the stars’. At its head was Major-General Sir Hugh Trenchard who was appointed as its first Chief of the Air Staff.

Researching within TheGenealogist’s occupational records for Trenchard reveals him easily in The Flying Book, The Who’s Who in Aviation 1918. We can also discover from this resource the details of the makeup of the Air Council that was in charge of the fledgling air force. Its political master was Lord Rothermere, as the Secretary of State and President of the Council, while Sir Hugh Trenchard was the most senior military officer. The next page goes on to reproduce the King’s proclamation in the London Gazette of 15 March, which named the new service as the Royal Air Force, it having been simply called the Air Force in the 1917 Act that had brought it into being.

Its new military head had not been a promising student in his youth. It had been by no means certain, in Trenchard’s younger years, that either of the services would accept him as an officer. He had failed the exams to enter the Royal Navy, to the despair of his mother, whose father was a Royal Navy officer. He then took several get a commission in the army. Eventually achieving his goal, he then served in the infantry in India and South Africa during the Boer War. In the second conflict he was shot and seriously wounded and lost a lung, becoming partially paralysed. Recuperating in Switzerland, and being bored, he took up bobsleigh riding. Miraculously, after a jolting crash with his sledge, he found that his paralysis had disappeared. Happy to find that he could walk unaided once again and after a period of further recuperation Trenchard returned to active service in South Africa. At the end of the Boer War he went on to a further period of service in Nigeria.

Then, in the summer of 1912, the 39-year-old army officer decided to learn to fly. Though not a particularly talented pilot he was able to gain his Royal Aero Club aviator’s certificate (No. 270) on 13th August 1912 flying a Farman biplane of the Sopwith School of Flying at Brooklands. This we can discover this by searching the pilots records on TheGenealogist.

Trenchard went on to hold several senior positions in the Royal Flying Corps during World War I, serving as the commander of the RFC in France from 1915 to 1917. Then, just prior to the official formation of the new air force, Trenchard’s post at its head was settled in January 1918. This process was not so smooth an appointment as it may at first seem. Despite being included in the 1918 edition of The Flying Book, as the Chief of the Air Staff, the Major-General had actually resigned in March 1918 after disagreements with the first air minister, Lord Rothermere. The resignation, however, did not take effect until late April in order that Trenchard would be the Chief of the Air Staff when the RAF was actually formed. With the departure of the first holder of the post the job then went to his rival, Major-General Sir Frederick Sykes. The next year, however, with Winston Churchill’s post-War appointment as the Secretary of State for War and Air, Major-General Sykes was moved sideways to head up the newly formed Civil Aviation ministry. With this reshuffle Trenchard was returned to his position as the Chief of the Air Staff and he was to remain in this post at the top of the RAF from then until January 1930.

TheGenealogist has an extensive collection of military records including Air Force, Army and Navy Lists. For the years prior to 1918, officers who were aviators will appear in the latter two books and from 1918 in the Air Force Lists. Within this set of records is The List of Officers of the Royal Air Force 1918. This will allow family history researchers with an ancestor commissioned into the new service to find their rank at the time of the RAF’s launch.

To get an idea of what the pioneering air force was like, there are a number of images of the flimsy aeroplanes from the time to be found in the newspapers digitised by TheGenealogist. Searching the newspapers and magazine collections on TheGenealogist also returns a copy of The Illustrated London News for 20 April 1918 which explains the formation of the RAF and gives its readers a picture of the new service’s uniform and sleeve insignia. Owing much of its styling to the army garb of the time, with breeches and putties, the chosen uniform was to be khaki-coloured in wartime and light blue in peacetime.

A copy of The Sphere newspaper dated 28 September 1918, also in TheGenealogist’s newspapers and magazine records, shows the change that took place later in the same year. From then the RAF moved to adopting naval type rings around the cuffs to denote rank and no longer had the rank bars on their caps. Despite this, the ranks of the RAF remained based on those from the army and so some former RNAS officers would have had to lose their naval designation as the RAF came into being exchanging them for army type ranks.

Around this time a number of advertisements appear in the newspapers from various tailors and gentlemen’s outfitters who were willing to supply the new service uniforms in both of the regulation colours.

Trenchard: a Major-General no more

After 1919 the RAF dispensed with the former hierarchy inherited from the army, when it introduced newly created air force ranks for its personnel. At the top Trenchard was no longer a major-general, when he exchanged his former military grade to become one of the first air vicemarshals. Within days, however, he was promoted another rank to be an air marshal and on 1st January 1927 Trenchard became the first officer ever to be raised from air chiefmarshal to the highest rank of the RAF: marshal of the Royal Air Force. 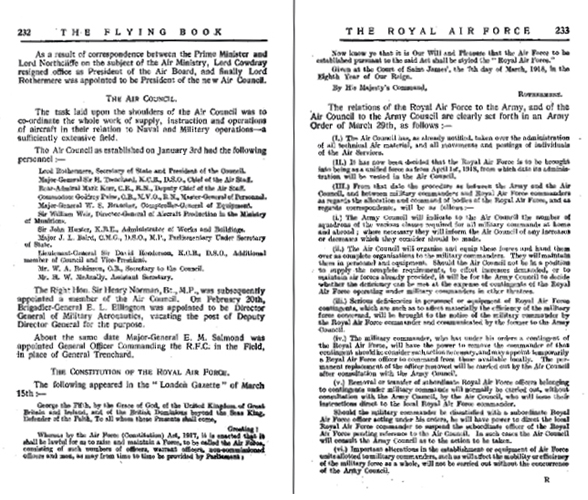 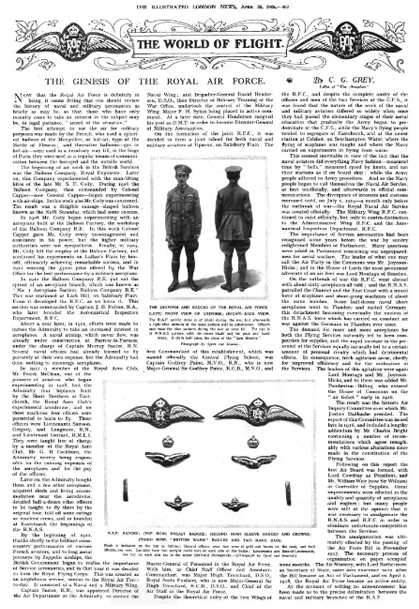 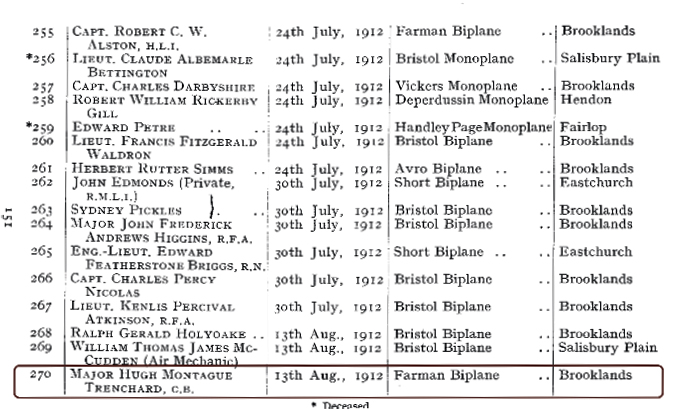 Aviator’s certificate number 270 in the pilots records on TheGenealogist

HQ at the Hotel Cecil

The new air force required its own headquarters and in April 1918 the Hotel Cecil, a grand hotel built in the 1890s between the Thames Embankment and the Strand and requisitioned for the war effort in 1917, now became its very first HQ. The neo-baroque building had been built by Jabez Spencer Balfour JP, MP and fraudster.

Balfour had held at least 14 directorships, in his time. Apart from being a magistrate, mayor of Croydon, Liberal MP for Tamworth and later Burnley, he was also a member of the Congregationalist Church. On the face of it Balfour seemed to be a worthy individual. However, his actions would cause thousands of families to be reduced to ruin by the collapse of The Liberator Building Society that he ran. Balfour was eventually tried at the Old Bailey and sentenced to 14 years’ penal servitude but gained his release in 1906. We are able to trace Balfour in many of the records on TheGenealogist even down to finding him in the 1891 census of Parkhurst on the Isle of Wight. For the full story of the Balfour scandal, look out for our article on this subject in the July issue of the Periodical.

With the incarceration of its unsavoury builder, the Hotel Cecil building project was abandoned. Then a new company bought the site and completed the grand hotel. On its opening it was one of the largest hotels in Europe, with more than 800 rooms. Situated on the Strand it overlooked Embankment gardens between Savoy Place and the Victoria Embankment with views of the Thames. While the Strand facade remains today, the majority of the building was demolished in the 1930s to make way for the large art deco Shell Mex House

A green plaque was placed on the Strand building, in 2008 on the 90th anniversary of the birth of the RAF, to mark its importance as the first headquarters of the service. Though this was an HQ that they only occupied for only a few months, before moving to Kingsway and eventually to its current Whitehall home in the 1950s, it is celebrated as the first base of the world’s first independent air force. The green Westminster City Council memorial includes the words of the English version of the Royal Air Force motto: ‘Through adversity to the stars.’

While Balfour and his hotel are no more, the RAF became the blueprint for air forces across the globe and this April celebrates its centenary as one of the three pillars of the armed forces of this country. The military records on TheGenealogist have already allowed us to trace the inception of this trail blazing service. Over the next few months TheGenealogist has plans to add even more RAF records to its collection in this centenary year, making it easier for researchers to find ancestors who reached for the skies. 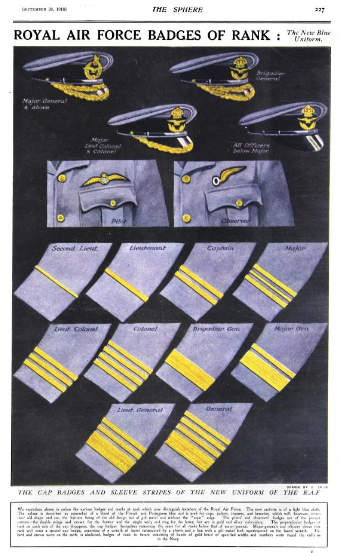 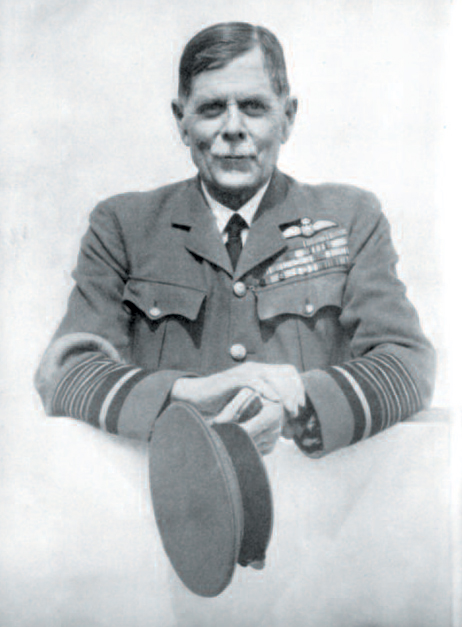 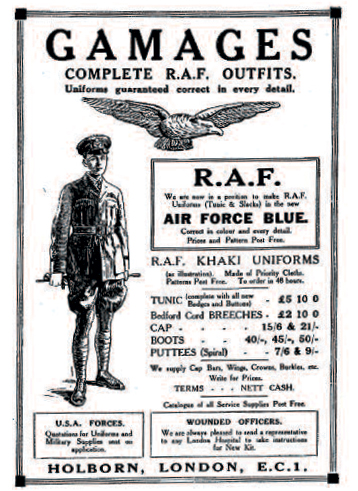