Tracing the trails our ancestors leave behind 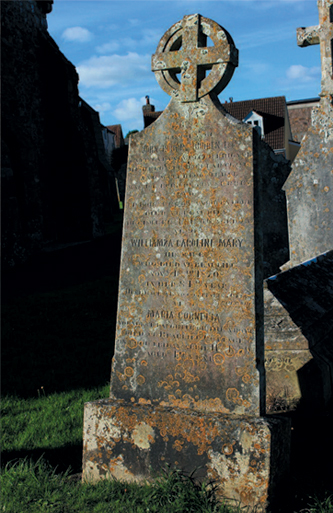 While taking part in The Genealogist.co.uk’s Headstone project, to photograph and record the details of old graves before the memorials become so weathered as to be unreadable, I came across an interesting monument. I was in one of the churchyards in a quiet northern parish of the Channel Island of Jersey when I happened upon a tall but quite plain headstone. Unlike many of the old monuments that are to be found in our cemeteries worldwide, crumbling, broken or with the inscriptions being washed away by acid rain, this one had weathered reasonably well. Although lightly covered in lichens, this stone was in good condition – the sea air that had blown in from the Atlantic for near on a century and a half had yet to make the words indecipherable.

The name carved at the head of the stone could still be clearly read as that of John Robert Budgen Esq. The memorial engraving revealing him to be ‘Late a Captain in the Rifle Brigade’ who ‘held the Peninsular Clasp and the Waterloo Medal’. This snippet of information immediately raised my interest in the person laid to rest below me. Images of 19th century battle flooded into my mind as, from his awards, I recognised that Capt Budgen would have fought in the Napoleonic Wars that took place in the early 1800s. In particular John Budgen would have been on the battlefield in the fight that took place on the Iberian Peninsular between Napoleon's empire and the allied powers of Spain, Britain and Portugal from 1808 to 1814. This Rifle Brigade officer would then have followed his commander, the Duke of Wellington, to fight at Waterloo in present day Belgium (then the United Kingdom of the Netherlands) and fought in the major conflict that took place on Sunday 18 June 1815 and which saw the end of Napoleon Bonaparte’s reign.

What was the story of this man, who ended his days buried in this sleepy country parish on an island in the English Channel? The Waterloo Roll Call of 1815 on TheGenealogist is a great resource that allows us to search within a list of nearly 2000 men, most of whom were officers present at the Battle of Waterloo under the command of the Iron Duke. This record collection allows us to search for ancestors using a number of fields including forename, surname, regiment, rank and staff position. We immediately find Budgen listed in the records and by looking at the transcript we see that he had been born on 1 December, 1791. The profile of this officer tells us that he was the eldest son of Thomas Budgen (of the family of Budgen, of Ballindoney, Co Wexford), Justice of the Peace and Deputy Lieutenant for Surrey, and JP for County Wexford.

Carved into the headstone in St Martin’s, Jersey is also to be found the name of his wife, Williamza Caroline Mary and daughter Maria Cornelia. Turning to TheGenealogist’s The Waterloo Roll Call tells us that Robert and Williamza had married on 13 January 1823, that she was the 3rd daughter of Colonel Lorenzo Moore of the ‘Battle-axe Guards’ and that her mother was Henrietta, the only daughter of Sir ST Janssen, Bart. It gives us more information about the Peninsular War Medal that Capt Budgen held, revealing that he had been awarded no fewer than eight clasps to the medal. John Budgen is thought to have served in every engagement from Corunna to Waterloo and was twice wounded.

With the details of his wife’s name and now turning to the marriage records on TheGenealogist, to further our research, we can discover a marriage licence for the couple from 1823. This tells us that the groom was of the parish of Nutfield in Surrey and that the bride was of Cheltenham, where the wedding probably took place.

TheGenealogist also has an extensive collection of military records and Captain Budgen can be found in the Army List of 1821 - Officers of the Army and Royal Marines - from which we are able to discover that he was appointed to the rank of Captain on 15 June 1815, just days before the Battle of Waterloo. The ‘w’ symbol next to his name confirms that John Robert Budgen was the recipient of the Waterloo Medal – while the second column shows us the date that he was put on half-pay, which was 17 December 1818. Army List of 1821 - Officers of the Army and Royal Marines

Half pay for officers was introduced by a cash-strapped government trying to cut its liabilities, once the wars with the French were over. A number of military men moved to places like Jersey at this time, where the cost of living was cheaper than at home on the UK mainland. We do not know if this had been the motive for John Budgen to reside in Jersey, as the family also had connections to Ireland and to Surrey and his father before him had homes in all three places. In the 1841 census of Jersey it is possible to locate Thomas Budgen of independent means, recorded in the Parish of St Martin. Moving forward ten years and by 1851 there is a Thomas Budgen recorded in Surrey where he was a magistrate for the county living in Nutfield. These entries are almost certainly Capt Budgen’s father. From John and Williamza’s marriage records, we already know that John’s parish on the marriage licence document was for the same Surrey parish of Nutfield.

By 1861, and five years before our Waterloo veteran's death, we are able to trace John and Williamza to their Jersey property: Beaulieu. Here they were living with a cook and two house servants and one of their grown up and unmarried daughters was also in the house on the night of the census, 7 April 1861.

To expand this family’s story we can find out more about them in the Peerage, Gentry and Royalty collections on TheGenealogist. These records include mentions in Burkes’ History of the Landed Gentry of Great Britain & Ireland 1886 Vol 1 and in various entries in the County Families of the United Kingdom. From these digitised books we can read records for Captain Budgen’s son, Thomas, that reveal the lineage and various residences for the family.

Our Peninsular War and Waterloo survivor, John Robert Budgen, is recorded to have had family seats at Richmond House in Twickenham, Ballindoney in County Wexford and Beaulieu in St Martin’s on the Island of Jersey. Our research has confirmed him to be the son of the Thomas Budgen whose homes were at Holmesdale House, Surrey and Beaulieu in the Island of Jersey. From this we can deduce that Capt Budgen’s place of death in Jersey had previously been in the ownership of his father.

Other details found in these records are that John was the grandson of John Smith Budgen MP and Lucretia Mills, daughter of Matthew Mills. As well as being a captain in the Rifle Brigade - having served in every engagement from Corunna to Waterloo and being twice wounded - John Robert Budgen also held the positions of a Justice of the Peace and Deputy Lieutenant for Surrey, as well as being a JP for Wexford in Ireland.

With the research pointing us to the fact that the Budgen family owned land in Ireland we can then turn to look for John Budgen’s entry in the 1853 Griffith's Valuation of Ireland (dated 14 April 1853). Also to be found within the Landowner records on TheGenealogist are the Tithe records for England and Wales. Here it can be seen that a substantial amount of land in Surrey, surrounding the village of Nutfield in 1843, is listed as in the ownership of members of the Budgen family as landowners.

Thomas Budgen, the captain’s father, was recorded in the census of 1851 as being in Nutfield on that date – at the time he was aged 84 and a magistrate of the county. We can see his death in 1852 in TheGenealogist’s death records for Reigate and a search of the Prerogative Court of Canterbury Wills on TheGenealogist turns up the will of Thomas Budgen confirming the inheritance of the Surrey land by his eldest son, John Robert Budgen. On the second page, Thomas gave and devised all his estates in the island of Jersey jointly to his sons John Robert Budgen and Thomas Budgen to sell by public auction or privately. Perhaps the sons decided not to dispose of the house called Beaulieu and came to some arrangement and that is why the headstone has both John and Williamza dying at that house so indicating it was still in the family’s ownership at least until 1870. I did note, however, that their daughter’s death was at Beaulieu Cottage in 1879 and the addition of ‘cottage’ to the name ‘Beaulieu’ may indicate it to be a different property from that of her parents and grandparents.

Only using the resources of TheGenealogist we have been able to build up a much fuller picture of this family and its Peninsular War and Battle of Waterloo hero, Captain John Robert Budgen, using details from an interesting headstone, military records, census and land records. The will of Thomas Budgen confirming the inheritance of the Surrey land by his eldest son, John