Revealing the history of William and Kate’s home

Set in the Norfolk countryside, and now forming part of the Sandringham estate, sits Anmer Hall. Today, this 10-bedroomed, late Georgian mansion is the country home to the Duke and Duchess of Cambridge, and their children Prince George and Princess Charlotte. But for over 290 years, it was the home of a family of wealthy commoners.Many of us are fascinated not only with researching our ancestors, but also with the history of our house – and TheGenealogist's records make it simple to do both. Using William and Kate’s Norfolk home as an example, it is easy to discover its recent history. An internet search tells us that between 1972 and 1990, Anmer Hall was leased to the Duke and Duchess of Kent, and Henry van Cutsem, a businessman and friend of Prince Charles, rented it until 2000. In this year, entrepreneur James Everett took on a lease that was terminated early to allow for the r efurbishment of the property to accommodate the Cambridges. The transformation of Anmer Hall, from the home of a country squire to that of royal ownership, had originally taken place in 1898 when it was sold to the neighbouring Sandringham estate- Sandringham itself had originally been bought by Queen Victoria as a wedding gift for her son, the future Edward V11. This estate is still in the personal ownership of the Queen today.

prior to the hall’s sale to Queen Victoria, and enables us to take a look at its prior occupants. The head of the household is shown to be a widow, Mrs Agatha Coldham, and her family – plus their servants. By searching back through the census collections on The Genealogist, the 1871 census shows that Agatha’s husband was Henry James Coldham. At that time, they were living at Anmer Hall with Agatha’s father-in-law, Henry Walter Coldham, who was the head of the household. The Coldham family were country gentry who had resided at Anmer Hall from at least the early 18th century. 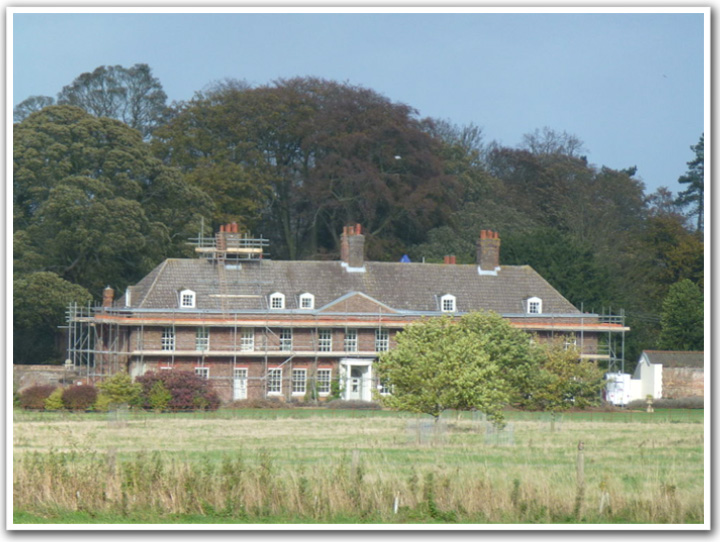 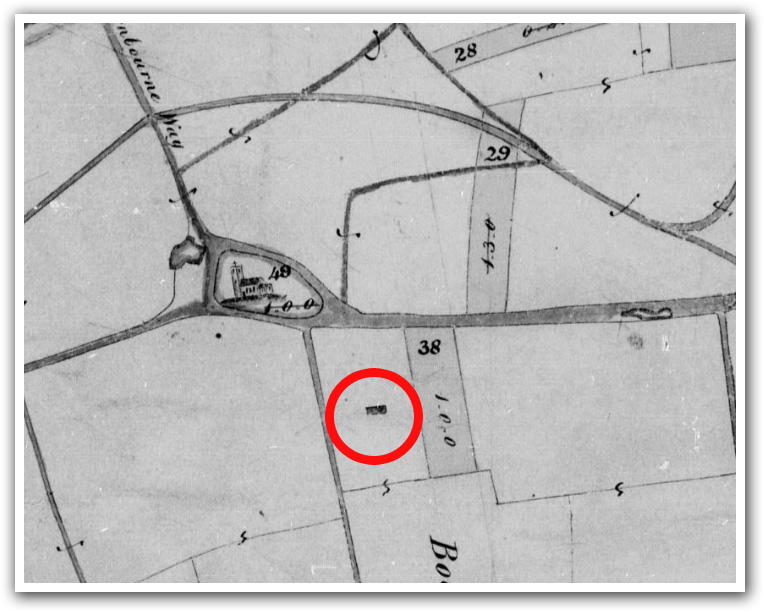 The location of Anmer hall – circled on this tithe map.

The 1891 census had showed that by the time of Anmer Hall’s sale, Agatha’s husband died. To find out when, we can use the recently released Norfolk Parish Records on TheGenealogist and find an image from the parish registers for nearby Anmer church. The relevant record is for the burial of Henry James Coldham, who died at the age of 47; it shows that he was buried in the churchyard on 16 July 1887. By then using the Civil Registration death records on TheGenealogist, we can see that Henry and Agatha’s son and heir, James Henry Hamilton Coldham, died in Chelsea at the young age of 23. This death was registered in the first quarter of 1898 and so this perhaps explains the sale of Anmer Hall to their illustrious royal neighbour, the Queen and her family. If we now look even further back in the records on TheGenealogist for Henry Walter Coldham, the father of Henry James Coldham, we can use the Norfolk marriage records to discover his marriage to Maria Pratt by her clergyman father – this is part of the ‘Marriages for the Parish of Ryston and Roxham.’ With one click, we are able to see a high quality image of the actual page in the parish register for 6 November 1834. Henry Walter can also be found with his wife Maria and household in the 1871 census at Anmer Hall.

A particularly useful set of records for finding out about where our ancestors lived are the ‘Tithe Maps and Apportionment’ records that have been digitised by TheGenealogist. These can reveal the owners the owners and occupiers of plots of land in this period, and cover different levels of society. By examining the maps and schedules from these land surveys undertaken between 1837 and the early 1850s, we are able to see that Henry Walter Coldham not only owned and occupied his own land in the parish, but he also leased certain other plots from the rector of the parish. The schedule document reveals that they shared the same surname – and so we are alerted to the possibility of them being part of the same family. A search of other sources indicates that Henry and John were brothers, the sons of James and Elizabeth Coldham. The church of St Mary’s Anmer, where John was rector, is clearly marked on the tithe map. Its location is within yards of Anmer Hall, which can be found just to the south-east of the church. As the number of plots on the tithe map testifies. Henry Coldham was a substantial landowner in the parish.

Turning to the 1852 Clergy List, which can be found within ‘Occupational Records’ on TheGenealogist, we find that the Reverend J Coldham was appointed to the living in 1816 – and his patron was none other than his brother, H Coldham Esq. A further record, also returned in the search, is the ‘Index Ecclesiasticus 1800-1840.’ Rather confusingly, this reveals that John Coldham was appointed rector of Anmer in October 1815; then vicar of Snettisham in November the same year. He then became rector of Stockton in April 1816 and then rector of Anmer again in June 1816. From the detail provided in the parish registers of Snettisham, it seems that John held more than one appointment at a time. The parish registers record the reverend’s death; the image of the original page shows that he died, aged 87, whilst living at Snettisham Vicarage, having been the vicar of the parish for 63 years. This was a period of time that included him leasing the parish glebe land to his brother, Henry. In the next census after its royal purchase, Anmer Hall is recorded as having just two occupants. In the 1901 census, there is an ‘Ordinary Agricultural Labourer’ listed as head of the household and his wife is the second resident, recorded as being Anmer Hall’s caretaker. However, by the time of the 1911 census, Anmer Hall was now occupied by the household of Rear-Admiral Sir Frederick Tower Hamilton had been a torpedo specialist and, at one time, Aide-de-Camp to the King, between 1096 and 1907. With the outbreak of World War 1, he was the second Sea Lord and Chief of Naval Staff, and in 1916, he was promoted to Admiral. 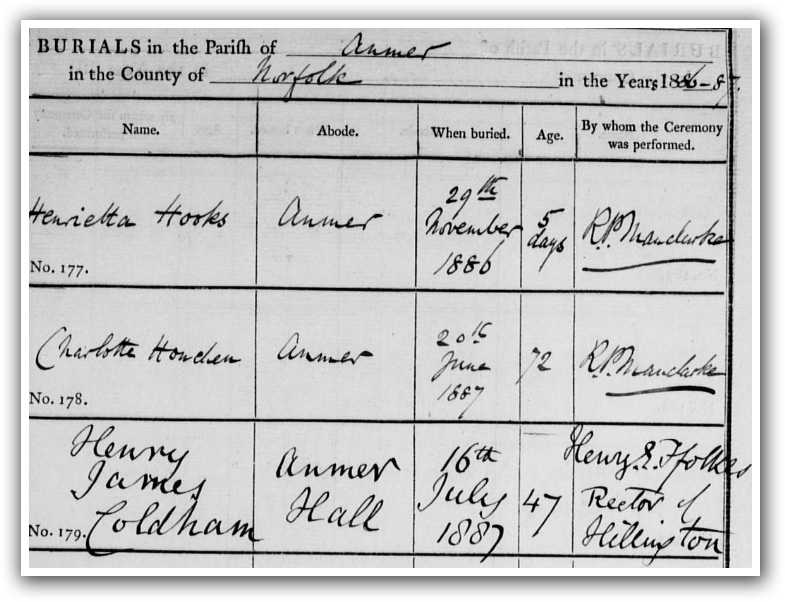 The burial entry for Henry James Coldham, from the Norfolk parish records 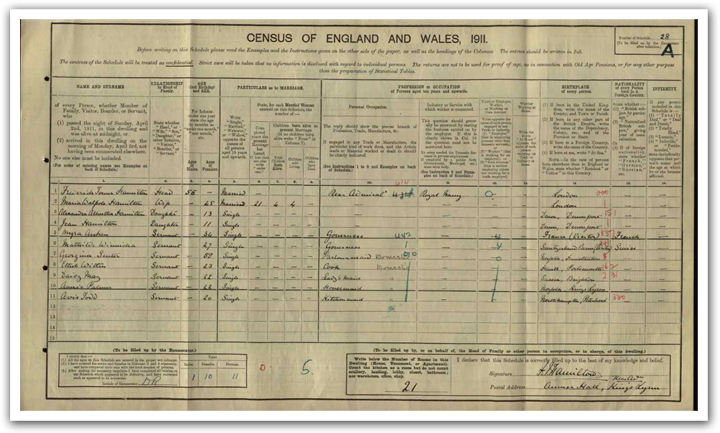