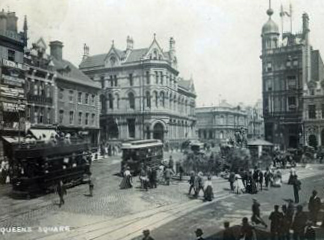 The settlement of Wolverhampton was founded in 985 by King Ethelred granting lands to a Lady Wulfrun, although it also appears to have been the site of a decisive battle between the Mercian Angles and West Saxons against the raiding Danes in 910. In 994, a monastery was consecrated in Wolverhampton for which Wulfrun granted land in the area.

Wolverhampton is recorded in the Domesday Book in 1086 as being in the Hundred of Seisdon and the county of Staffordshire, and having 50 households.

In the 14th and 15th centuries Wolverhampton is believed to have been one of the ‘staple towns’ of the woollen trade, which today is reflected by the inclusion of a woolpack on the city’s coat of arms, and by the many small streets, especially in the city centre, called ‘Fold’, as well as Woolpack Street and Woolpack Alley.

From the 16th century onwards, Wolverhampton became home to a number of metal industries including lock and key-making and iron and brass-working.

From the 18th century, Wolverhampton was well known for production of japanned ware and steel jewellery. Wolverhampton also has a strong history in the ornate cast iron safe painting industry from the Victorian era.

The young Princess Alexandrina Victoria (later Queen Victoria) is known to have visited Wolverhampton in the 1830s and described it as ‘a large and dirty town’ but one which received her ‘with great friendliness and pleasure’. In Victorian times, Wolverhampton grew to be a wealthy town mainly due to the huge amount of industry that occurred as a result of the abundance of coal and iron deposits in the area.

Wolverhampton gained its first parliamentary representation as part of the Reform Act 1832, when it was one of 22 large towns that were allocated two members of parliament. A local mob attacking electors who voted or intended to vote for the Tory candidate led to the 1835 Wolverhampton riot, with Dragoons called in to end the intimidation.

The railways reached Wolverhampton in 1837, with the first station located at Wednesfield Heath, now Heath Town, on the Grand Junction Railway. Wolverhampton railway works was established in 1849 for the Shrewsbury and Birmingham Railway and became the Northern Division workshop of the Great Western Railway in 1854.

In the 19th century the city saw much immigration from Wales and Ireland, following the Irish Potato Famine.

Wolverhampton had a prolific bicycle industry from 1868 to 1975, during which time a total of more than 200 bicycle manufacturing companies existed there, but today none exist at all.

Large numbers of black and Asian immigrants settled in Wolverhampton in the mid-20th century. The city is home to a large proportion of the Sikh community, who settled there during the period (1935–1975) from the Indian state of Punjab.

Exclusive census analysis from data at TheGenealogist reveals that the surnames most distinctive to Wolverhampton in 1881 were: Beards, Beddows, Fullwood, Highfield and Blakemore; the five most common were Jones, Smith, Williams, Evans and Davis, reflecting an influx of Welsh people during the Industrial Revolution. Wolverhampton’s population was around 10,000 at the turn of the 19th century and had risen to 160,000 by 1911.

Leading data website TheGenealogist.co.uk has a wealth of records for Wolverhampton and its traditional county of Staffordshire. Here is a quick run-down of what you can find (in addition to national collections):