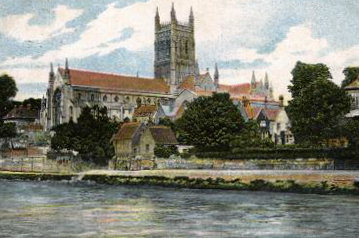 The trade route past Worcester, which later formed part of the Roman Ryknild Street, dates to Neolithic times. The position commanded a ford over the River Severn (the river was tidal past Worcester prior to public works projects in the 1840s) and was fortified by the Britons around 400BC. Using charcoal from the Forest of Dean, the Romans operated pottery kilns and ironworks at their settlement here.

The city’s Old English name was Weorgoran ceaster, ‘fort of the Weorgoran’ (the ‘people of the winding river’). In 680, their fort at Worcester was chosen to be the seat of a new bishopric, suggesting there was already a well-established and powerful Christian community. The oldest known church was St Helen’s, which was certainly British; the Saxon cathedral was dedicated to St Peter.

The town was almost destroyed in 1041 after a rebellion against the punitive taxation of Harthacanute. The following century, the town was attacked several times during ‘The Anarchy’, ie civil war between King Stephen and Empress Matilda.

By late medieval times the population had grown to around 10,000 as the manufacture of cloth started to become a large local industry. The town was designated a county corporate, giving it autonomy from local government.

Worcester was the site of the Battle of Worcester (3 September 1651), when Charles II attempted to forcefully regain the crown, in the fields a little to the west and south of the city, near the village of Powick. However, Charles II was defeated and returned to his headquarters in what is now known as King Charles house in the Cornmarket, before fleeing in disguise to Boscobel House in Shropshire. Worcester had supported the Parliamentary cause before the outbreak of war in 1642 but spent most of the war under Royalist occupation.

In 1670, the River Severn broke its banks and the subsequent flood was the worst ever seen by Worcester.

The Royal Worcester Porcelain Company factory was founded by Dr John Wall in 1751, although it no longer produces goods. A handful of decorators are still employed at the factory and its museum is still open.

During the late 18th and early 19th centuries, Worcester was a major centre for glove making, employing nearly half the glovers in England at its peak (over 30,000 people). In 1815 the Worcester and Birmingham Canal opened, allowing Worcester goods to be transported to a larger conurbation.

The British Medical Association (BMA) was founded in the Board Room of the old Worcester Royal Infirmary building in Castle Street in 1832.

In 1882 Worcester hosted the Worcestershire Exhibition, inspired by the Great Exhibition in London. There were sections for exhibits of fine arts (over 600 paintings), historical manuscripts and industrial items. The number of visitors is recorded as 222,807.

During World War Two, the city was chosen to be the seat of an evacuated government in case of mass German invasion.

In the 1950s and 1960s large areas of the medieval centre of Worcester were demolished and rebuilt as a result of decisions by town planners. The current city boundaries date from 1974, when the Local Government Act 1972 transferred the parishes of Warndon and St. Peter the Great County into the city.

Exclusive census analysis from the data at TheGenealogist.co.uk reveals that common Worcester surnames include Davis, Price, Griffiths, Hill, Lewis, Powell, Harris; in 1841, Allen, Green, Walker and Morgan were also common here; as were Wood, Hughes, Phillips and Morris in 1911.

Leading data website TheGenealogist.co.uk has a wealth of records for Worcester and Worcestershire. Here is a quick run-down of what you can find (in addition to national collections):