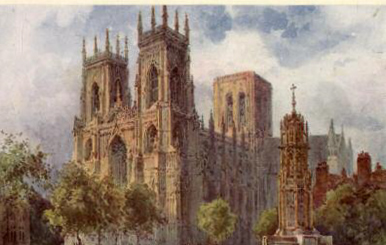 After the Romans left, small Celtic kingdoms arose in Yorkshire. An army of Danish Vikings invaded Northumbrian territory in 866 AD. The Danes conquered what is now York and renamed it Jórvík, making it the capital city of a new Danish kingdom under the same name, the only truly Viking territory established on mainland Britain. The division of Yorkshire into three historic ‘Ridings’ (North, East and West) was made by the Danes (South Yorkshire is a modern division, split off from the West Riding in 1972).

The people of the region rebelled against the Normans in September 1069, enlisting Sweyn II of Denmark. They tried to take back York, but the Normans burnt it. What followed was the Harrying of the North ordered by William. From York to Durham, crops, domestic animals, and farming tools were scorched. Many villages between the towns were burnt and local people were indiscriminately murdered. The population of Yorkshire later boomed until hit by famine in the years between 1315 and 1322. The Black Death reached Yorkshire by 1349, killing around a third of the population.

The Dissolution of the Monasteries in 1536 led to a popular uprising known as the Pilgrimage of Grace, which started in Yorkshire as a protest. Some Catholics in Yorkshire continued to practise their religion and those caught were executed during the reign of Elizabeth I.

During the English Civil War, Yorkshire had divided loyalties. York was a base for Royalists; while from their base in Hull the Parliamentarians fought back, taking Yorkshire town by town, until they won the Battle of Marston Moor and with it control of all of the north of England.

The wool textile industry has long been important to Yorkshire’s economy. It began as a cottage industry centred on the old market towns, then moved to the West Riding where entrepreneurs were building mills that took advantage of water power gained by harnessing the rivers and streams flowing from the Pennines. The developing textile industry helped Wakefield and Halifax grow. In the 16th and 17th centuries Leeds and other wool-focused towns continued to grow, along with Huddersfield, Hull and Sheffield, while coal mining first came into prominence in the West Riding.

Canals and turnpike roads were introduced in the late 18th century. In the following century, the spa towns of Harrogate and Scarborough flourished, due to people believing mineral water had curative properties.

The 19th century saw Yorkshire’s continued growth, with the population growing and the Industrial Revolution continuing with prominent industries in coal, textile and steel (especially in Sheffield and Rotherham). However, despite the booming industry, living conditions declined in the industrial towns due to overcrowding – this saw bouts of cholera in both 1832 and 1848.

Exclusive census analysis from data at TheGenealogist reveals that common surnames in Yorkshire in the 19th century that stand out against the country in general included Walker, Thompson, Shaw, Wilkinson, Harrison, Johnson, Watson and Barker plus Greenwood, Atkinson and Sykes in 1841 and Ward in 1911. The population rose from 1.6 million in 1841 to 4.0 million in 1911, with mining, weaving and farming work dominating occupations.

Leading data website TheGenealogist.co.uk has a wealth of records for Yorkshire. Here is a quick run-down of what you can find (in addition to national collections):